For Rosa Aguirre and Gloria Hernandez, hearing the stories from victims is the most difficult part of their jobs.

Last Thursday, April 11, the Mission Police Department held their annual open house, walk and vigil for National Crime Victims’ Rights Week. The theme for this year was “Honoring Our Past and Creating Hope for the Future,” and the families of victims of crimes in Mission gathered to memorialize their loved ones. 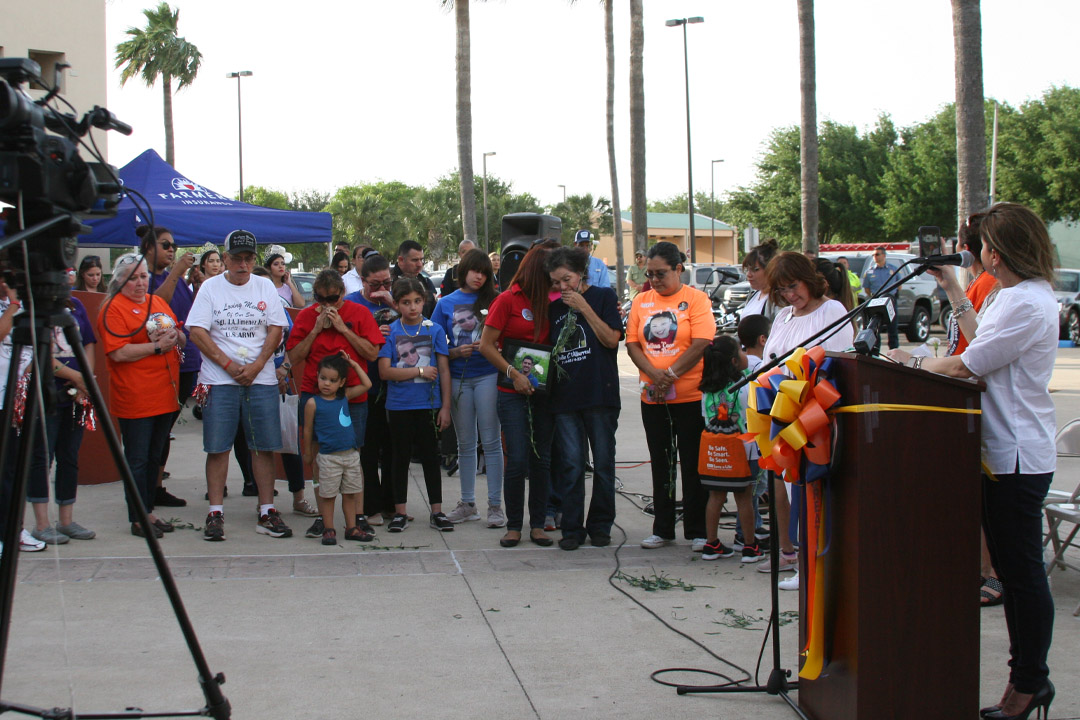 The 12th annual event was organized by the police department and the Mission Crime Stoppers, and included several informational booths within the PD that people could explore and get more information about organizations working with crime victims and their families.

Aguirre, the forensic nurse manager representing Doctors Hospital at Renaissance, deals with the medical aspects of crime and abuse cases. Hernandez is the community education representative for the Children&rsquo;s Advocacy Center, and travels to different cities to promote the prevention of child abuse.

Both agreed that events like this one communicates useful information to people in the city.

“When the community comes out and gets to know people, or hear about actual resources that they have available to them, they start reaching out a bit more,&rdquo; Aguirre said. “My organization does sexual assault exams for victims, as well as child abuse cases.&rdquo;

Aguirre said they cover all forms of abuse, including elder abuse, domestic violence, and other traumatic crimes such as gunshot wounds and stabbings.

“We do the evidence collection for law enforcement,&rdquo; Aguirre said. “So we work really closely [with them] and we refer our patients to them for counseling and stuff.&rdquo;

“It&rsquo;s pretty much about spreading the word on prevention or signs and symptoms,&rdquo; Hernandez said. “We&rsquo;re kind of just giving them that power of knowledge, so the kids aren&rsquo;t scared to say something, or if they see something, they say something.&rdquo;

Hernandez and Aguirre noted that delayed outcries are common in the area due to the difficult nature of the crimes, but that should never stop someone from coming forward.

“The majority of the people I see are victims of sexual crimes,&rdquo; Aguirre said. “And the delayed outcry is really really high with children, and they have that fear that they might get in trouble, or the person that does that to them are related to them or know them in some way or another.&rdquo;

The stories heard from victims of crimes, or in other circumstances, from their families, make their jobs hard.

“[It&rsquo;s difficult] listening to every different story that children, men and women come in with,&rdquo; Aguirre said.&nbsp;“It&rsquo;s never a repetition of one certain thing. Just when you think you&rsquo;ve heard it all, something else comes in.&rdquo;

“Individuals know there&rsquo;s a big elephant in the room and they don&rsquo;t always want to hear it,&rdquo; Hernandez added. “Because it is a really hard subject to hear about, and it&rsquo;s part of our culture sometimes that we don&rsquo;t want to say anything, but we&rsquo;re starting to see those doors open.&rdquo;

Aguirre was one of the many speakers during the vigil held after the walk at the start of the event. Along with her, Mayor Armando O&rsquo;ca&ntilde;a, Police Chief Robert Dominguez, Father Roy Snipes, Public Information Director Roxanne Lerma, Crime Victim Liaison Diana Macias Hidalgo County Assistant District Attorney Juan Villescas, Sexual Assault Program Coordinator Hilda Gracia from Mujeres Unidas and Martha Rangel representing RGV Family and Friends of Murdered Children, spoke about the effects crimes can have on a person, their life, and the lives of their families.

Dominguez said that while Mission is one of the safer cities in the area, he is still dismayed to see crime victims in the community. The Mission Crime Victims program was implemented in 2002 in order to further educate residents.

“We&rsquo;re here to be that support [for them] at all times,&rdquo; Dominguez said. “The most important part of the program is trying to get that information out to the public that we serve. As we started providing that information to our community, our criminal investigation bureau saw a lot of cases coming in from victims, and they started coming forward and asking for assistance.&rdquo;

Following the vigil families gathered as Amber Nicole Cabrera sang in their loved ones&rsquo; honor. The families held white carnations and each other, as a dove was released in memory of their victims&rsquo;.

“I know this is very difficult for you all,&rdquo; Crime Victim Liaison Macias said. “It&rsquo;s really hard, but if we don&rsquo;t have these types of events, how can we come together and celebrate the memory of your loved ones and not forget what happened to them? It&rsquo;s important not to forget.&rdquo;