The Texas A&M University Kingsville softball team came in second after making the Division II Women’s College World Series Championship, held in Denver, Colorado. According to the Javelinas, it was the furthest the program has ever gone in competition. 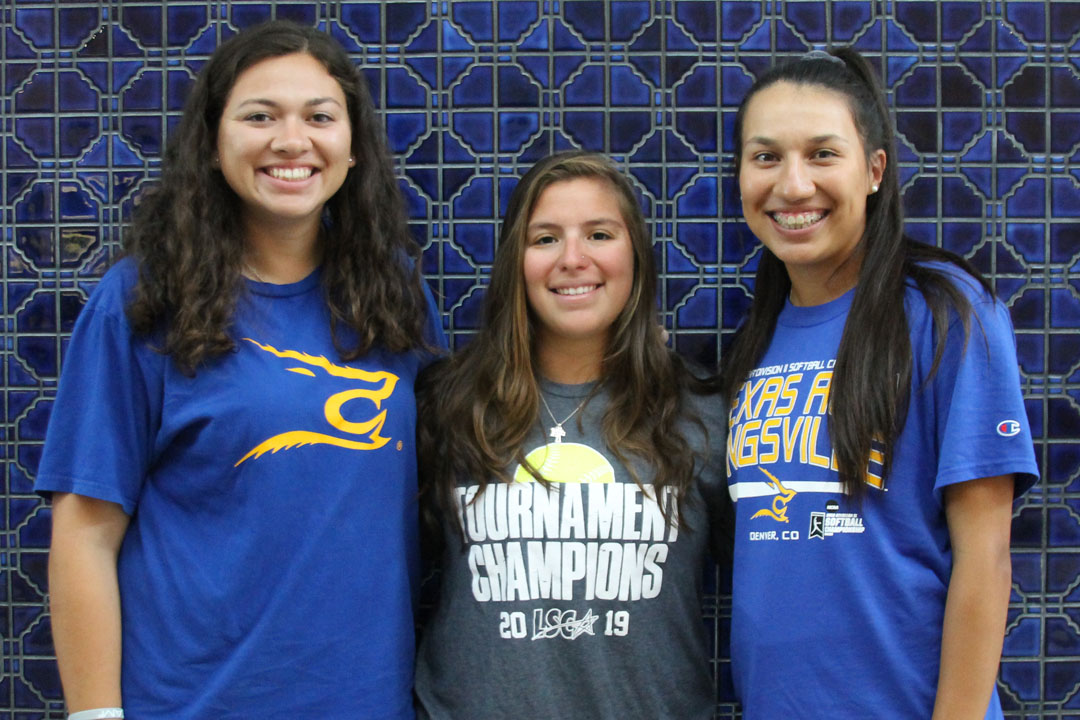 Roxy Chapa (a senior who recently graduated from TAMUK), Amber Reyes (a freshman) and Melina Sanchez (Graduate Assistant Coach) were all part of the team&rsquo;s historic run, and all hail from different areas in the Rio Grande Valley. The camaraderie they formed with their fellow teammates initially drew them to the sport as young girls, and has kept them involved through their collegiate careers.

Chapa, who graduated from Sharyland High School, recently graduated from TAMUK with a degree in Communication Sciences and Disorders. Originally a soccer player in her younger years, she said her team all moved to softball and grew from there.

“It was just good to stick with that little group,&rdquo; Chapa said. “We&rsquo;re all friends.&rdquo;

Sanchez, who graduated from Edinburg North High School, is in the graduate program studying Education Administration at TAMUK. She said the sport builds the character of those who participate in it.

“I think softball and athletics in general offers a lot of useful life lessons like hard work, determination and passion,&rdquo; Sanchez said. “I think a lot of good things can come out of it.&rdquo;

Reyes, a freshman majoring in Kinesiology, graduated from Edinburg High School. She has been playing softball since she was 4 years old, and found a second family with the Javelinas.

“I guess growing up and playing it, you become more competitive,&rdquo; Reyes said. “And then you meet a lot of people throughout the years of playing and they become your best friends.&rdquo;

The Javelinas softball team travelled to Colorado for the final stretch after several successful games (finishing the season at 52-10), and they faced off against the Augustana University Vikings from South Dakota. After winning the first game, the Javelinas played hard but came up short in the final two, becoming the National Runner-Up and completing the best campaign in the program&rsquo;s history.

The road to the championship was a long and difficult one, according to the athletes. While everyone was happy to return, they were disappointed with the final result of the game.

“Coming in second place is kind of hard, and it&rsquo;s not what we wanted,&rdquo; Sanchez said. “It just sucks knowing you were so close, but it&rsquo;s always good to be home.&rdquo;

Several fans have been keeping up with the team&rsquo;s journey to the championship.

“We&rsquo;ve seen a lot of people on social media following and keeping up with everything,&rdquo; Chapa said. “It&rsquo;s exciting to be able to come back to that.&rdquo;

Her first year as a college athlete showed Reyes that it takes a bit of time to adjust to the travel lifestyle, so she was glad to be home, albeit disappointed.

“It kind of sucked losing and coming in second and having the season end because I know that the team that I was on, we should have taken it,&rdquo; Reyes said. “There was so much more we could have done, but it&rsquo;s over now. I&rsquo;m happy we made it that far, because it was a good run for us. We accomplished a lot.&rdquo;

Reyes found the transition into college life easy at first, meeting plenty of people early on.

“The hardest part was managing my time between softball and school and learning to be my myself,&rdquo; Reyes said. “It got easier in the second semester because I got closer to the girls and I knew there was more help for me.&rdquo;

Chapa, happy to have graduated, agreed that time management was one of the biggest lessons she learned in her college experience.

“I had to make time for everything but also not neglect other stuff,&rdquo; Chapa said. “And now I&rsquo;m going to be an intern at the Baptist Student Ministry [at TAMUK].&rdquo;

Sanchez was proud to see the team go so far this year, and said the biggest factor that contributed to their success is the team sticking together.

The Javelinas are considered a young team, with a majority of their players being freshmen and sophomores.
“It was more about gelling together and learning how each one of us plays a part on the team,&rdquo; Reyes said. “It was about getting to know one another.&rdquo;

Chapa agreed, saying that because so many members of the team are new everyone had to adjust.

“At the beginning I had a hard time remembering everyone&rsquo;s name,&rdquo; Chapa said. “It&rsquo;s a big team, so we also had to be okay with not being close to everyone, but getting along and working together as a team.&rdquo;

Sanchez said that part of that has to do with understanding the many personalities that make up the Javelinas.

“We overcame adversity,&rdquo; Sanchez said. “While all of those things were hard to get through, I think we did a really good job with it.&rdquo;