High school kids, young adults and seniors alike have continued to embark on a particular week-long service project for ten years now, though its roots go back much further.

St. Paul’s Catholic Church in Mission (1119 N Francisco Ave.) has been hosting their Catholic Youth Renovation Project (CYRP) this week, working to renovate six different homes in the RGV. The project is a culmination of hard work organized by volunteers and youth leaders from the parish. 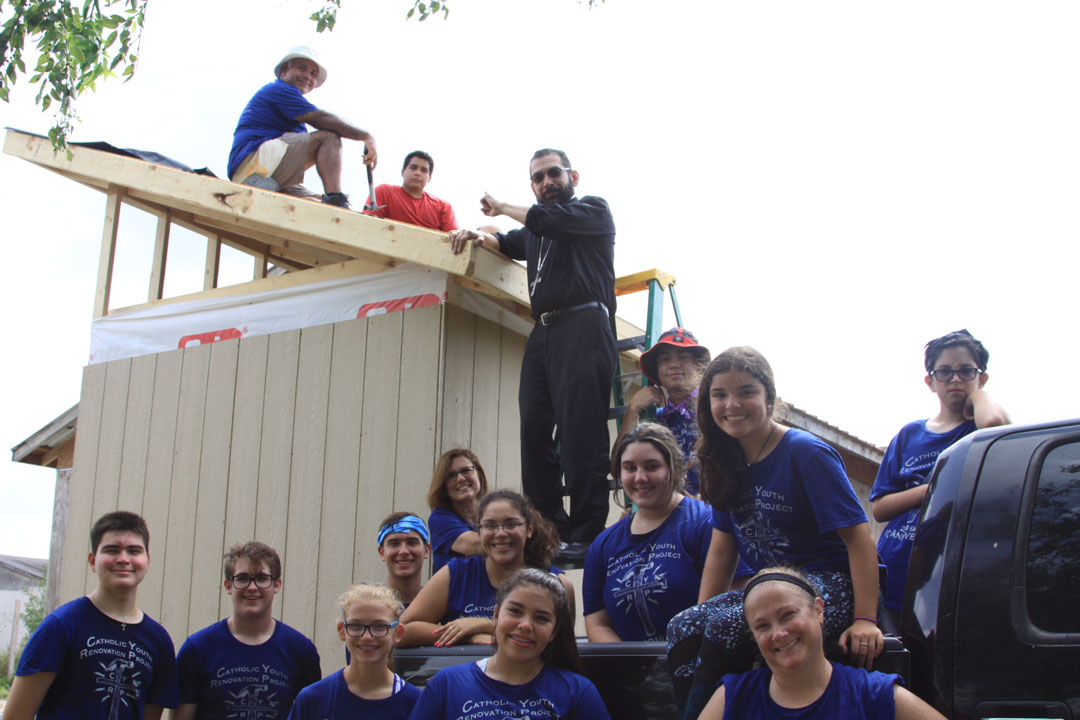 Kids ranging from incoming freshmen in high school to graduating seniors commune for one week every summer in order to perform these acts of service for people in need. Volunteers who are in college and adults also join in during process as well, teaching the youth how to properly install insulation, roofing and other home projects that are usually taken for granted by the general public.

Michael Thompson, an 18-year-old who attended Sharyland High School, participated in CYRP last year and came back in 2019.

“I thought it was really fun to be able to come out here and help out families that are in need of it,&rdquo; Thompson said. “It has helped me learn to appreciate what I have, and what I&rsquo;ve taken for granted my whole life.&rdquo;

It&rsquo;s no easy task choosing to undertake the project. The group stays overnight the whole week in the parish hall and wakes up daily at 6 a.m., eats breakfast provided by the Knights of Columbus, packs their lunch for the day, attends daily mass at 7 a.m. and then heads out to the build sites to get to work in the summer heat. When they return in the evening, local businesses and restaurants band together annually to provide dinner for everyone.

Funding for the projects comes from donations to the church. Volunteers complete entire home renovation projects over the course of the week, guided by contractors and adult leaders with experience.

People wishing to participate in CYRP do not have to be parishioners at St. Paul&rsquo;s, and several youth representing other Catholic churches in the RGV participate every year.

“The main motive was just to be able to help people,&rdquo; Caesar Hinojosa, a 16-year-old youth volunteer who attends IB Lamar Academy, said. “And we&rsquo;ve realized how fortunate we all are.&rdquo;

Luke Padilla, a 17-year-old youth volunteer who attends Pioneer High School, agreed with Hinojosa. Both volunteers have been part of CYRP for three years.

“Seeing the reactions of the families when we&rsquo;re done with their house [keeps me coming back],&rdquo; Padilla said. “It humbles you with what you have, we need to be grateful.&rdquo;

Juan Daniel Trujillo, a 17-year-old from IDEA Academy in McAllen, joined CYRP for the first time this year. An avid volunteer, he heard about this endeavor and was excited to be part of it.

“I heard about this through my youth group [in Holy Spirit Catholic Church], and I got excited about it,&rdquo; Trujillo said. “People go through enough, and I feel like we&rsquo;re able to do something better for them like modify their house or rebuilding one if we have to.&rdquo;

Volunteers often get to talk to and interact with homeowners during the process. Homeowners have to apply for assistance based on need.

“I&rsquo;ve noticed that in these past three days, one of the kids was running by and I was playing with them,&rdquo; Trujillo said. “And I noticed that they were really happy with what they had, and that hit me hard.&rdquo;

“It&rsquo;s such a blessing to be here,&rdquo; Trujillo added. “I&rsquo;m glad I made this decision.&rdquo;

Kristie Lee and Melissa Salazar, two of the organizers of CYRP, spoke highly of the results the project has yielded over the years. Lee, who got the inspiration to continue similar service projects in the Valley when she was a volunteer in high school, described how CYRP was born at St. Paul&rsquo;s.

“This was a project that was started back in the 80&rsquo;s, and it was called ‘Mission Service Project,&rsquo;&rdquo; Lee said. “Through the years it was the First United Methodist Church and Our Catholic Church that would do it every year. Churches would come in from across the state to join the project.&rdquo;

Ten years ago, the group from St. Paul&rsquo;s was providing several sites for the project, and the priest at the time, Father Greg Kuzmanski, encouraged the youth leaders to branch off on their own and focus on a new project – which became CYRP.

“It&rsquo;s stayed very much the same through the years,&rdquo; Lee said, adding that seeing the youth gather annually warms her heart. “It is the thing I look forward to every single year. It&rsquo;s the toughest week you&rsquo;ll ever love, that&rsquo;s what I say.&rdquo;

Lee said that projects like CYRP had such an impact on her as a teenager that she continued to do it and does it for her own children to learn.

“Everybody has it in them to do good, and people want to do good,&rdquo; Lee said. “It&rsquo;s just about giving them the opportunity to do it. It&rsquo;s good to have an outlet for the charity in their hearts, and that&rsquo;s what the project provides.&rdquo;

Seeing so many youth volunteers gather annually in service of others is inspiring for Lee and Salazar, who look forward to CYRP throughout the year.

“A lot of people think they need to go down to the depths of Mexico or they need to take a trip to Africa to be able to serve the neediest, and they live amongst us, they go to school with us,&rdquo; Lee said. “Be kind, because everybody&rsquo;s fighting a hard battle.&rdquo;

Daniel E. Flores, the Bishop of Brownsville, visits CYRP sites every year. On Wednesday, he was taken to all the locations, got to learn a bit about what they were working on, and prayed over the groups, anointing them with holy water.

“It&rsquo;s a source of encouragement,&rdquo; Bishop Flores said. “They really put their hearts and their souls into it.&rdquo;

Getting to know the families being impacted and learning practical hands-on skills allows them to be aware of the people around us and how people can help, Flores added.

“It&rsquo;s a sign that we&rsquo;re following Jesus,&rdquo; Flores said. “A very essential part of that is being mindful of how we can be of service to those around us, that&rsquo;s part of the message of the gospel.&rdquo;