Investigators arrested a member of the Vallucos prison gang last week after a murder in western Hidalgo County. 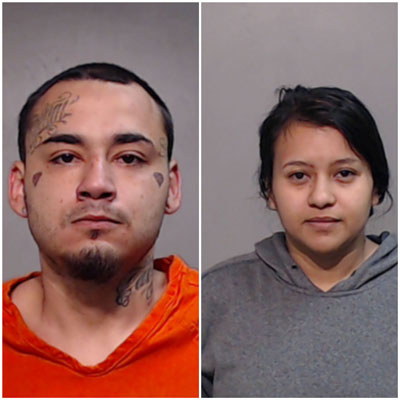 They said nothing Monday during a brief appearance before Justice of the Peace Jason Peña, who ordered Deleon and Rivera be held without bond.

“Looks like it just sunk in, huh,” Peña said after they left the room, commenting on their facial expressions.
Court records don’t list attorneys for Deleon and Rivera, who couldn’t be reached for comment.

The investigation started on July 25, when a woman called the Sheriff’s Office to report her son missing.

The woman said her son, Fernando Garza Jr., 22, of Mission, hadn’t contacted her for the past two days.

Garza had been staying with someone nicknamed “Diamond” and his girlfriend. Concerned about her son, Garza’s mother went to their home and started asking questions.

“She learned from a female later identified as Edna Rivera that Fernando had gotten into an argument with a male nicknamed “Diamond” and that “Diamond” had pulled a gun out,” according to court records.

Deputies found Garza’s car, a maroon Dodge Durango, the following day. They also found Garza, who had suffered a gunshot wound to the face, dead near an orchard at the intersection of 13 Mile Line and Iowa Road.

Investigators met with Rivera, a Mexican citizen who described herself as married with four children. She confessed to binding Garza’s wrists with tape. Rivera also tied up another man she knew as “Gordo.”

After she restrained them, “Diamond” and Alfredo “Freddy” Huerta, 19, of Mission took them away at gunpoint, Rivera said, according to court records.

“Diamond later returned and told her that he had shot Fernando in the face and left him in some orchards,” according to court records.

The Sheriff’s Office identified “Diamond” as Julio Cesar Deleon of Peñitas, a member of the Vallucos prison gang with a criminal record that included burglary, assault and drug charges.

After he dropped out of high school, Deleon worked at a car wash in Mission before becoming self-employed, according to jail records. At some point, he received tattoos of diamonds on his face and left hand.

Deleon confessed to killing Garza and leaving his body near the orchard, according to court records. Garza’s friend “Gordo” corroborated the story.

In an interview with investigators, “Gordo” said “he and Fernando were bound and kidnapped at gunpoint from Edna’s house by Diamante and Freddy,” according to court records, which summarize his statement. “Edna knew what was going to happen and is the one who bound their wrists together with tape.”

The Sheriff’s Office arrested Huerta on Wednesday and charged him with capital murder. Court records don’t list an attorney for Huerta, who couldn’t be reached for comment.

Huerta, who is accused of participating in the kidnapping and murder plot, is wanted by the Sheriff’s Office. He couldn’t be reached for comment.

Investigators believe a “drug robbery” prompted the murder, according to a news release from the Sheriff’s Office, which didn’t offer any further details.

When deputies searched Rivera’s home, they found 12 pounds of marijuana, Xanax pills and crystal methamphetamine, according to court records.

The most serious charge against them, capital murder, is punishable by life in prison or the death penalty.