Prior to the 2014 season, the Palmview Lobos football team had never qualified for the UIL state playoffs. 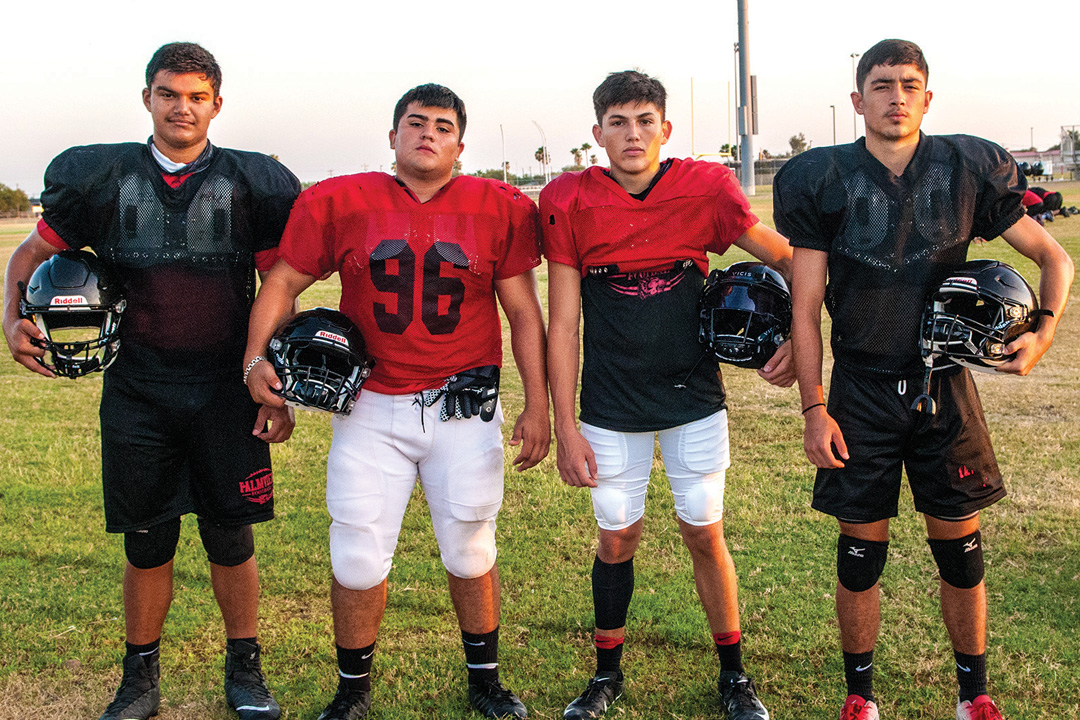 Now in his sixth year at the helm of the Lobos football program, head coach Margarito “Mage” Requenez must be doing something right. But Requenez is not about to take all the credit for turning the program around. Because like every successful head coach knows very well, coaching is not a one man job.

As for the importance of changing the culture on the team, Requenez said, “We had to break down that wall. And the first group that did it, they were the ones that set the foundation for our success ever since. And they set the bar pretty high.”

Coming off their only non-playoff season in 2017, when they went 0-6 in district play, the 2018 Lobos turned things around dramatically by going 6-3 in District 16-5A-1 and earning the district’s third seed. That is quite an accomplishment in a district made up of 10 teams.

When asked what in his opinion accounted for this dramatic turnaround, Requenez said, “It was making sure that the kids were healthy. We changed our off-season program a little bit to get a bit stronger. That’s what allowed us to stay healthy for the whole season and that’s what made the difference.”

Leading the way for the Lobos’ offense this season will be senior quarterback David Gonzalez. Having played receiver his prior two seasons on the varsity, this will be Gonzalez’s first season under center. So why is he just now getting an opportunity to be the Lobos’ signal caller?

“The reason I kept him out of quarterback is because we had a guy that had been playing quarterback for a couple of years and David, who played quarterback when he was younger, was our best receiver,” Requenez said. “I wanted to make sure that I had my best guy out there to try to catch the ball. But this year since he’s a senior, he wanted to take the reins of the offense, so he’s getting his chance.”

“I’m looking forward to being able to depend on my team every time we take the field,” Gonzalez said.

Even though this is only the second year that the Lobos and the Mission Veterans Patriots have been district foes, a rivalry, and some animosity, has already developed between the two teams. Case in point, when asked which 16-5A-1 team he is looking forward to playing the most and why, Gonzalez said, “Mission Vets because we had some trash talking with them last year. They talk the most and we’re going to do our best to shut them up this year.”

Junior defensive end Miguel Alaniz shared what he believes it will take for the Lobos to have an even better season this year than last when he said, “We need to be more conditioned, because we play better when we’re conditioned. We’re also going to need every player to do more. And finally, we need to pray to have a better season.”

As for what he likes the best about playing defensive end, the 6-foot 200 pound Alaniz said, “My favorite thing is to sack the quarterback. But I also like making them run the ball so that we can have the advantage defensively.”

Lobos’ junior left guard Albert Vargas is in his second season on the varsity and in his second season as a starter. When asked what he believes the key to his team’s success is, Vargas said, “We’re a pretty conditioned team and a we’re a strong team. We go outside every day and work hard. And as a team we all give it everything we have every time we’re on the field.”

Like Gonzalez, Vargas is looking forward to going up against the Patriots the most this season. When asked why, the 5-foot-7 225 pound offensive lineman said, “We had a little problem with them last year and we want to settle things up with them this year.”

“The Coyotes have always been a very strong running team and I’m looking forward to the challenge of trying to stop that,” Cavazos said.

That non-district game between the Lobos and the Coyotes will be taking place Friday, August 30 at 7:30 pm. The Lobos will then be opening their district schedule at home against the Rio Grande City Rattlers Friday, September 6, also at 7:30 pm.