Over one century ago a parish was established in deep South Texas that would shape the religious and cultural landscape in the Valley for years to come.

Our Lady of Guadalupe Catholic Church (located at 620 N. Dunlap Ave. in Mission) was established in 1899 as a daughter church to the historic La Lomita Mission. 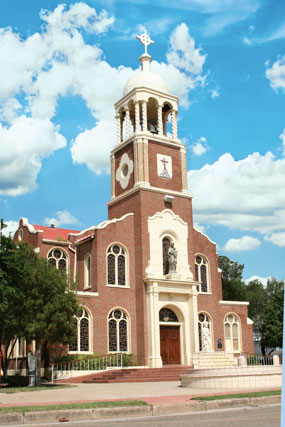 Originally a wooden structure named Our Lady of the Mission (Nuestra Se&ntilde;ora de la Mission), a fire burnt the original church down.

In 1927, the establishment was rebuilt with brick and renamed Our Lady of Guadalupe (Nuestra Se&ntilde;ora de Guadalupe). Since then, it has undergone a $2.5 million renovation/expansion project in 2013 that increased the quality and capacity of the building.

The Mission revival-inspired structure includes a four-story tower topped by a dome belfry, and features mission parapets, arched windows and elaborate limestone detailing. Our Lady of Guadalupe was recorded as a Texas Historic Landmark in 1990 for it&rsquo;s cultural legacy.

When entering the Catholic Church for mass, secular country western music is often being played on the speakers (an uncommon practice in most traditional parishes in this denomination). Father Roy Snipes, who has been the priest at Our Lady of Guadalupe for almost 27 years, spoke on his motivation to include country music in church services when in 1979, as an intern, he was asked to go to an event at Mission High School to say a blessing.

“The superintendent was there [Dr. Kenneth White], and he got up and gave a little talk,&rdquo; Snipes said. “He said ‘this country song kind of tells you what I&rsquo;m trying to talk about.&rsquo;&rdquo;

Snipes could not recall the song, but said the idea struck him as White held the cassette player up to the microphone.

“I said ‘that&rsquo;s true,&rsquo;&rdquo; Snipes said. “Often the words of a song express things much better than we can say, or the sense, the wisdom, the tenderness of a particular point of view can be illuminated.&rdquo;

Snipes took his final vows in La Lomita in 1980 and was subsequently sent to work in Starr County, taking the idea with him there. When he returned to Mission in 1992, he brought it with him, now incorporated in many services, gospels and sermons.

“Some people would say that&rsquo;s inappropriate, they say ‘well that&rsquo;s not Christian music,&rsquo;&rdquo; Snipes said. “When we play it, it&rsquo;s Christian music because we&rsquo;re Christians.&rdquo;
His stance is that country music, particularly the poetry within the lyrics, reminds attendees of God, “and what could be better than that?&rdquo;

“Sometimes it reminds us more of him than some of the old, stuffy hymns do,&rdquo; Snipes said. “It can be more evocative than just a statement.&rdquo;

Father Roy has incorporated another atypical practice within the church – his dogs. Often seen by his side at public events, his rescue canines are regular attendees of mass at Our Lady of Guadalupe.

“I&rsquo;ve always been so charmed and delighted by dogs, they have a sweet joy and loyalty, and they&rsquo;re almost never mad at you; they love you the way you are,&rdquo; Snipes said. “Some people may disagree, but I don&rsquo;t think it&rsquo;s any accident that Jesus [Christ] was born surrounded by animals. We probably won&rsquo;t appreciate exactly how much that means until we get to heaven.&rdquo;

Snipes spoke on the historical significance of Our Lady of Guadalupe in Mission, saying its roots are in ranch culture and it is important to maintain eternal values within the city. On a busy week, five to six thousand people make their way to the church for one of the many mass times.

“We still have that country-style atmosphere and attitude,&rdquo; Snipes said. “We pride ourselves on being hospitable, and we want everyone to feel at home here.&rdquo;

Snipes served many of his years with the late Father Jim Phieffer, and called their journey an adventure. Their goal was and continues to be, now with Snipes and Father Richard Philion, making the church a place where people walk out feeling better than when they walked in.

Our Lady of Guadalupe helps the community whenever they can, contributing through charitable works and making connections at public events and celebrations. Snipes wishes they could do more.

“I hope they get some sense that the truth and the goodness and the beauty and the spirit of Christ is working in them,&rdquo; Snipes said. “The founder of the Oblates was St. Eugene, and he used to say when you celebrate the sacred mysteries and you preach the gospel to people, they should not go away saying that they&rsquo;re dazzled by your brilliance or baffled by your big words, they should go away saying ‘isn&rsquo;t that something? The spirit of Christ he was talking about is in us. God is here for us.&rsquo;&rdquo;

The most rewarding part about being part of this particular church is the ability to have one&rsquo;s heart&rsquo;s lifted, according to Snipes. That&rsquo;s Our Lady of Guadalupe&rsquo;s role in the community – to serve as a place anyone can go to for a sense of home.