When Palmview resident Maria Lourdes “Mary Lou” Prudencio was diagnosed with a slew of respiratory issues that gave her many symptoms ranging from coughing, runny nose and headaches, she said she knew who to blame: The Agua Special Utility District.

The 80-year-old Palmview resident lives on the 100 block of Breyfogle Road and said that for weeks now, the neighborhood has been suffering due to construction in the area from the $42 million Palmview wastewater project to bring a sewer system to the city. 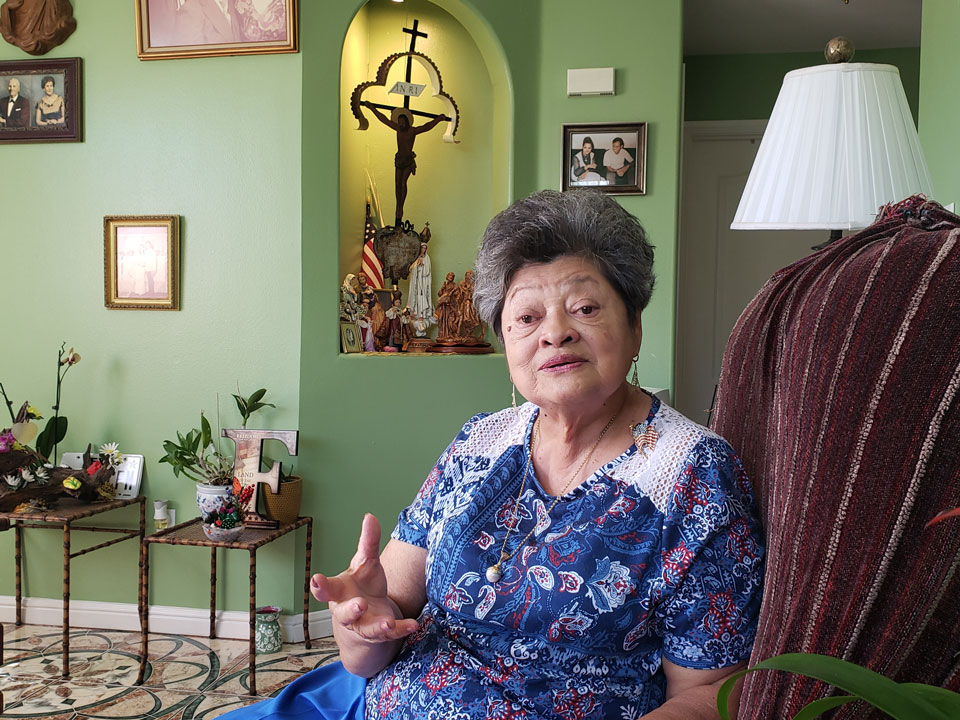 As part of the project, 25 miles of streets are being torn up to place sewer lanes and then are patched before the city paves them, leaving them dusty.

“Every day, I have to dust the house, sometimes twice a day because of all the dust getting in,” Prudencio said. “There’s just always so much of it that I can’t go outside anymore and garden.”

Last June, Prudencio said that she noticed a neighbor who regularly drives by the neighborhood at a speed significantly faster than the area’s speed limit of 30 miles per hour, and raising a cloud of dust in their wake.

“It’s like the driver wanted to make sure that dust was following them everywhere,” Prudencio recalled.

Since then, Prudencio started feeling respiratory issues that she said she’s never suffered from before.

“I go through three boxes of Kleenex a week because of all the sneezing and my runny nose,” Prudencio said. “I had to buy an expensive air cleaner just to make it manageable.”

Prudencio went to a respiratory specialist in Weslaco and when she received the diagnosis of her respiratory issues she told the doctor’s office where to send the bill to: Agua SUD.

“They’re the ones who wanted this sewer installed that led to this construction and no one else should pay for it,” Prudencio said.

Prudencio said she contacted the city of Palmview and Agua SUD to request they water the area to bring down the dust. Once KRGV-TV ran a story last July on dust concerns in the neighborhood, OG Construction-the contractor for the project-began regularly watering the area.

“They said on TV that the place was regularly getting watered but that’s a lie, they didn’t start doing it until I told them,” Prudencio said. “If Agua SUD can’t handle a simple watering solution, what makes them think they can handle a complicated sewer system?”

“I haven’t met her but I am aware of her reputation,” Saenz said, adding that he doesn’t blame her for having concerns. “She’s a resident of Palmview and she wants what she thinks is right.”

AT ODDS
Prudencio has been at odds with the utility district and has publicly been against the Palmview wastewater project. In several public meetings and town halls, Prudencio spoke out against having a sewer system in the area.

“When I lived in Oklahoma City and then Refugio before moving here, they had just gotten sewer systems and there were backup problems where I lived,” Prudencio recalled. “It ruined my bathrooms in those places and I don’t want to clean something like that again. My husband and I moved here specifically because of the septic tanks because we did not want to clean any more bathtubs filled with sewage.”

Prudencio has been at odds with Agua SUD since before it was created.

Back when the utility district was the La Joya Water Supply Corporation, Prudencio regularly attended meetings, serving as a watchdog for the community.

Agua SUD was created in 2008 by the the Texas Legislature after an investigation found several mismanagement and corruption concerns at the La Joya Water Supply Corporation that led to it going under court supervision for three years, leading to Agua SUD.

“Agua SUD has a tremendous history,” former board Director Mario Chapa said. “Mary Lou participated in making information available and made the State Legislature aware of the issues going on. That’s what brought down La Joya Water.”

According to Chapa, among the concerns raised by the LJWS was inconsistencies in their billing.

“She kept noticing how people were being overcharged and tried to do something about it,” Chapa recalled. “At the time, no one thought anyone would stop it as the utility district was threatening to disconnect people if they didn’t pay.”

Prudencio brought these concerns to state Gov. Greg Abbott, who was the state’s attorney general at the time, Chapa said.

“She had their attention and once Abbott became involved because of her participation, the investigation into the water district began,” Chapa said.

Chapa served as board president for the newly formed Agua SUD from 2010 through 2014. He recalled that Prudencio regularly attended meetings and participated even after Chapa left the board.

“In 2016, once the new administration took over, the board created a new position of outreach director and hired then La Joya school board president Oscar “Coach Salinas,” Chapa said. “During public comments in meetings she volunteered for that position to try to save Agua some money but Agua was not interested. It led to some fiascos.”

Salinas’ hire was instrumental in the creation of Senate Bill 814 in 2017. Authored by state Sen. Juan “Chuy” Hinojosa (D-McAllen) the bill addressed cronyism concerns in the utility district. It led to Salinas leaving his position alongside then-La Joya school board Vice President Armin Garza, the Agua utility project manager, with each receiving severance payments totaling nearly half a million dollars.

“She didn’t understand why the district would spend so much money,” Chapa said of Salinas’ position. “She was active at the La Joya Water Supply and continued to be afterward. Unfortunately she’s been slowed down.”

Prudencio said this is due to her health that has led her to be wheelchair bound and how she spent most of last year taking care of her ailing husband, who passed away last December.

“I hope this sewer project never happens,” Prudencio said. “Just asphalt and pave the road, forget about the sewer and the high prices residents will have to pay.”

Though she can’t attend meetings, Prudencio said it’s important for the community to be involved in the local government after a lesson imparted by her mother.

“My mother taught me to be involved and see what is going on with your government,” Prudencio said. “She’d say, ‘you’re going to live there, why wouldn’t you be involved?’ So you must know what is going on with your country and community, and try to help others either by pointing out what is wrong and trying to fix it, or see how you can contribute. That’s what I’m doing.”