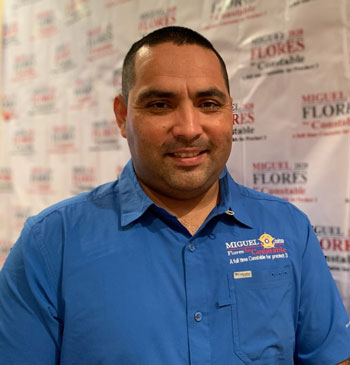 In 2012, when a sheriff’s deputy approached him about stealing drugs, Miguel Flores contacted federal agents.

They asked him to record phone calls and participate in carefully orchestrated sting operations, which resulted in the conviction of two Mission Police Department investigators and seven sheriff’s deputies.

The vast majority of officers, though, work hard to keep people safe, Miguel Flores said, adding that he wants to build connections between officers and the community.

“There’s a lot of sacrifice, a lot of dedication, a lot of commitment in law enforcement, first responders, firefighters,” Miguel Flores said. “Everybody, in general, sacrifices a lot.”

Miguel Flores said his campaign will focus on Precinct 3, not Gallardo.

“I’m not running against anyone,” Miguel Flores said. “We are running for an office, and that’s what we are focusing on.”

Born and raised in rural Mission, Miguel Flores started working at Whataburger while attending La Joya High School. He became a general manager, which came with a steady paycheck and opportunity for advancement.

Miguel Flores said that Whataburger treated him well, but he wasn’t passionate about the job. He wanted to become a law enforcement officer.

“It dates back to, probably, 1985. I was 4 years old in pre-kinder. And I still remember. It was career day. I remember this Border Patrol agent walking inside the room. And I see this agent, for me, he appeared to be like a God,” Miguel Flores said during a 2017 interview, when he spent hours discussing the Panama Unit scandal. “The uniform. The badge. The gear. And ever since, I was like ‘I want to be a police officer.’”

He accepted a low-paying job at the Hidalgo County jail, which paid less than $14 an hour.

Miguel Flores stuck with the Sheriff’s Office. He attended the academy, became a patrol deputy and eventually earned a place in the narcotics unit.
That’s when the trouble started.

In late August or early September 2012, when Miguel Flores had been a narcotics investigator for just eight months, Deputy Gerardo Mendoza-Duran approached him.

Duran asked Miguel Flores to share information provided by informants, who occasionally told him where smugglers stashed drugs and money.

“I remember telling him like ‘We’re not working that much, and I’ve been getting a lot of information. I don’t mind sharing that. We can arrest them,’” Miguel Flores said during the 2017 interview. “He was like: ‘Naw. We don’t arrest them, man. We take their shit.’”

Duran apparently became suspicious. In November 2012, he filed a formal complaint against Miguel Flores, accusing him of working with drug traffickers.

Weeks later, the FBI arrested Duran. He resigned from the Sheriff’s Office and pleaded guilty to a federal drug trafficking charge.

“Actions taken against me during and after my work with Federal Agents involving the panama unit case affected my law enforcement career at the Hidalgo County Sheriff’s Office. I know that I took the correct actions when I was asked to participate in illegal activities by former panama unit members,” Miguel Flores wrote, according to a copy of his resignation letter released under the Texas Public Information Act. “I no longer feel safe or comfortable working at the Sheriff’s Office and have no choice but to resign my position as Deputy Sheriff effective immediately.”

Miguel Flores also filed a lawsuit against Hidalgo County, which settled the case.

The stress took a toll on his marriage. Officers responded to domestic violence calls at his house in 2013 and 2014.

His wife, Magdalena “Maggie” Flores, signed affidavits that accused Miguel Flores of hitting her, threatening to kill their children and sexually assaulting her.

They divorced, reconciled and were remarried.

“We did have problems, like any other couple,” Maggie Flores said, adding that she didn’t read the affidavit before she signed it. “I was mad. I signed it. Maybe if I would have read it, I would have said: ‘Hey, you know what, I didn’t say this.’”

Miguel Flores said he never threatened to kill his children.

“At the end of the day, it was my fault,” Miguel Flores said. “I could have left.”

Miguel Flores said he isn’t concerned the issue will surface during the campaign.

“I know exactly where I stand. What I’ve done. What I’m going to keep doing,” Miguel Flores said. “And that’s why I’m here.”

Miguel Flores returned to the Sheriff’s Office in June 2018. As part of the job application process, he underwent a thorough background check.

Miguel Flores didn’t stay long. Faced with a choice between working for the Sheriff’s Office and running for constable, he resigned in February.

To pay his bills during the campaign, Miguel Flores accepted a job with the La Joya Police Department.

“And I gave everything up because I believe in my campaign, in what we have to offer,” Miguel Flores said. “I strongly believe that we can make a positive impact.”

Nov. 9 is the first day for candidates to file ballot applications for the March primary.