30 years after a deadly bus crash claimed the lives of 21 students from the Mission school district, members of the community reflected on how they coped with the tragedy.

Last week, members of the community were invited to a special memory honoring the 21 students who died after a traffic collision resulted in a bus from Mission CISD to fall into a caliche pit filled with water. The ceremony was held at Alton Memorial Junior High School, which opened 17 years ago and was dedicated for the students, Principal Sylvia Garcia said. 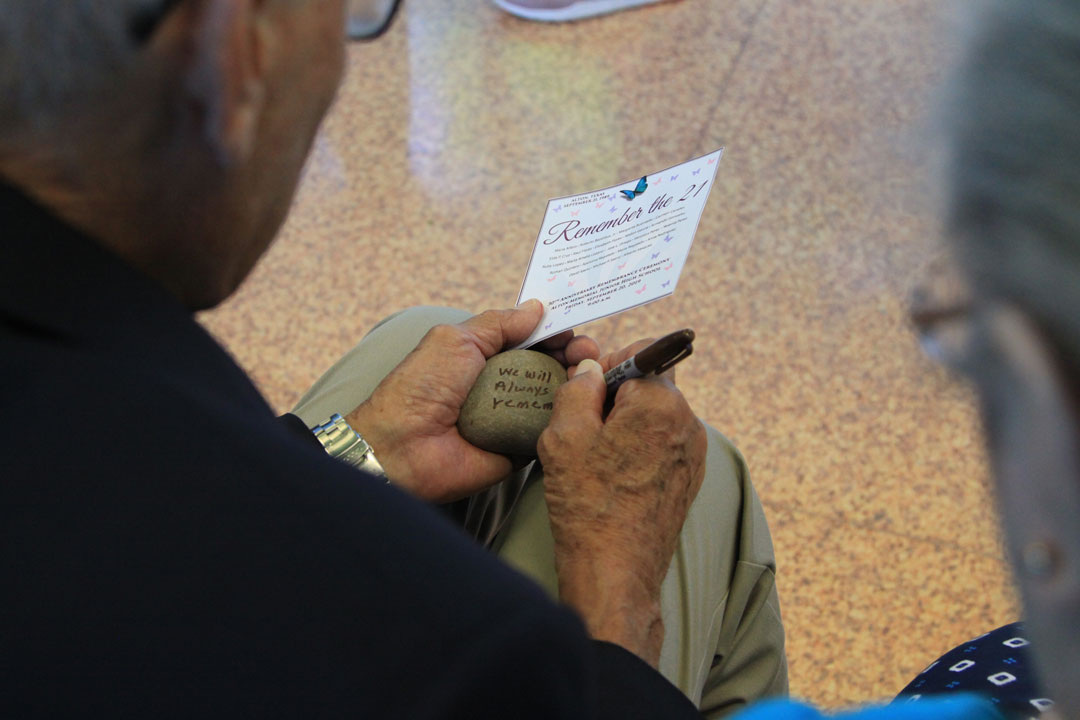 “Some of these students are kids who have a relative or know someone who was in the bus that day,&rdquo; Garcia said. “They need to know about this. I know there&rsquo;s a memorial [at the site of the accident] and this is part of their history. They need to make sure they don&rsquo;t forget and that people came together.&rdquo;

The dedication ceremony, held Friday, Sept. 20, was done the day before the 30th anniversary of the crash.

Attendees were treated to a view of the campus&rsquo; butterfly garden, where 21 Spanish Olive trees were planted for the slain students and where in full bloom.

Among the guests attending was Cynthia Cantu del Bosque, a lawyer based out of McAllen who was on the bus when it fell into the pit and survived after a friend from her neighborhood pulled her out.

“I lost seven people from the neighborhood that day,&rdquo; del Bosque said. “I was sitting at the back of the bus, so I didn&rsquo;t see the crash because I was studying for a trigonometry test and remember feeling like we were suddenly changing direction and next thing I knew, we were falling and taking in water. I blacked out after that.&rdquo;

The bus del Bosque was riding was struck by a Dr. Pepper delivery truck with faulty brakes at the intersection of Bryan Rd. and Mile 5 Road, sending it to plummet into the caliche pit which was unfenced at the time. The accident remains one of the largest school bus accidents in Texas history and gained national media attention.

“We didn&rsquo;t know how serious it was at the time,&rdquo; Gus Zapata, who was principal at Mission High School at the time of the accident, said at the ceremony. “Throughout the years, people always ask ‘How did you manage to get through something so serious?&rsquo; So soon after the accident, we started finding answers to that question.&rdquo;

After the accident, parents arrived to the school hoping for word of their child&rsquo;s survival. After the crash, the school district received support from individual donors to help the families, and neighboring school districts offered assistance. The football game scheduled for that week was cancelled, and a memorial was held in its place at Tom Landry Stadium that was attended by 10,000.

That sense of community, Zapata said, was key in how the community coped with the accident.

“Just like we&rsquo;ve had shootings and other incidents, the answer is people coming together to find answers,&rdquo; the former principal said. “We had people from the school district and other districts and community to come together to find answers for how we&rsquo;re getting through this serious accident. And we found the answers. It was for the families, for the students who didn&rsquo;t survive, and those who did.&rdquo;

The bus crash, Zapata said, is one he&rsquo;ll never forget as he lives with the reminder of it due to his family.

Rosa Zapata, Gus&rsquo; wife and a counselor at Mission High School, said the campus helped survivors of the bus accident by having a campus employee assigned to ride with a student.

“It was a hard time for all of us there, especially for the students as we struggled to make life normal again,&rdquo; Rosa said. “It was a little difficult for them to get back on the bus and follow the same route and pass by the site everyday. We knew we were approaching the site or were close to it because the children would get quiet and turn away. They wouldn&rsquo;t even look at the site. We were there for support, reminding them it was safe to be there. Life was gonna go on.&rdquo;

Del Bosque was the student assigned to ride with Zapata.

She said that after her near death experience, she embraced the second chance that was given to her.

She started taking her schoolwork seriously, she recalled, graduating from high school a few months later and attending college and has been practicing law for 11 years in McAllen and has been married for 21 years and has two children. She says she lives her life in memory of her 21 former classmates.

After the ceremony, attendees were invited to write messages of love for the 21 students on stones that would be placed around the campus&rsquo; butterfly garden.

Del Bosque wrote “We will never forget.&rdquo; Gus wrote “We will always remember you. Love you.&rdquo; Rosa wrote “You left a hole in our hearts.&rdquo;