Though he may have passed away months ago, the memory of DPS Trooper Moises Sanchez will live on in Edinburg.

On Wednesday, members of the public were invited to a street renaming ceremony north of 10th Street and Highway 107 where the street was named after Sanchez. The street, now named “Trooper Moises Sanchez Boulevard,” will serve as a reminder of his sacrifice. 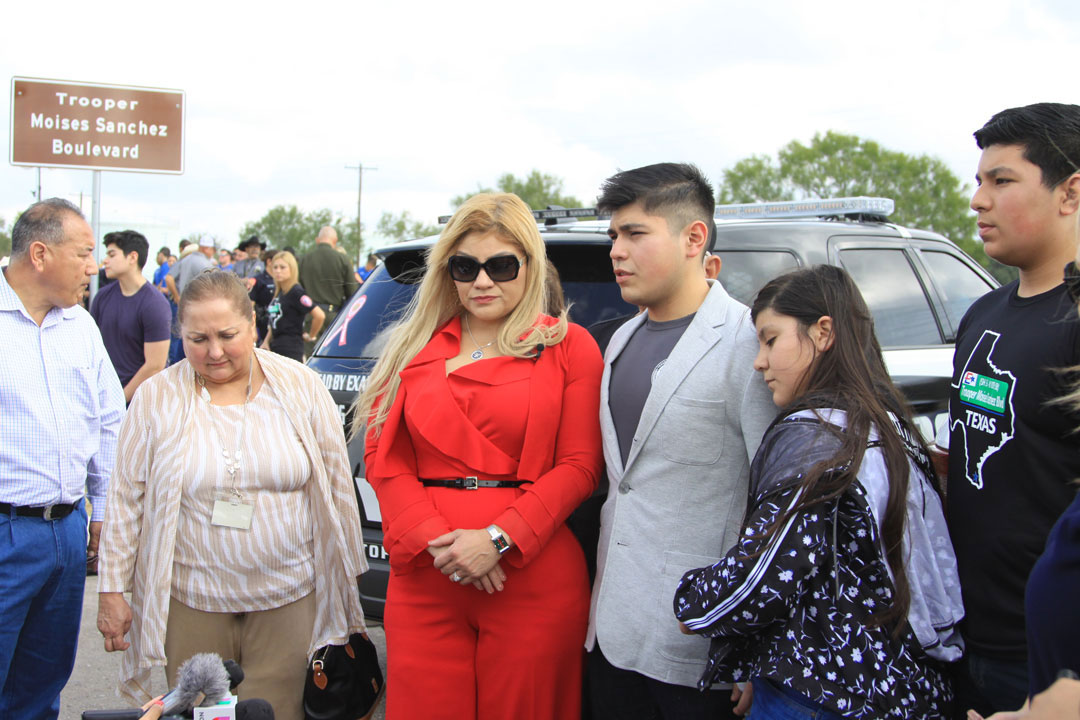 “I&rsquo;m sure you agree we&rsquo;d rather not be here at all, we&rsquo;d rather a trooper still be here serving his community like he did for most of his life,&rdquo; Edinburg Mayor Richard Molina said. “There is nothing to ease the pain that Mrs. Sanchez and his children still feel. We want them to know that Moises Sanchez will never be forgotten. With the street named in his honor, his name will continue to be spoken, and his story will continue to be told.&rdquo;

Sanchez was hospitalized last April after receiving a gunshot wound to the head and shoulders after responding to a hit-and-run vehicle crash at the intersection of N. 10th Street and W. Freddy Gonzalez Drive, about a mile south from the street dedicated in his honor. He later succumbed to his injuries following surgery last August according to the Officer Down Memorial page.

“I know now if my father was here, he would be very grateful that everyone is taking care of us and each other,&rdquo; Zachary said at the event. “A lot of times people do ask about my father…Many of you know the story and how tragic it was, but now you know how beautiful it has become. It&rsquo;s easy to forget details naturally, but one of the big things I never forgot was the community. Every time I spoke of my father I always talked about the immense support from the community and cities and county, state coming together for us.&rdquo;

The street renaming doubled as the red ribbon cutting ceremony for the newly expanded north 10th Street project, which kicked off last year after years of development. The expansion connects North 10th Street to West Monte Cristo Drive and expanded the formerly one lane street north of Highway 107 into five lanes with two shoulder lanes.

“And it came under budget,&rdquo; Torres said, adding that all the multiple departments who worked together to bring the project to completion was worth celebrating.

“This is why it&rsquo;s so fitting to rename this street ‘Trooper Moises Sanchez Boulevard,&rsquo;&rdquo; Torres said. “Trooper Sanchez embodied the power of community and
service. He and all law enforcement heroes who have made the ultimate sacrifice in securing our safety will be remembered for generations to come.&rdquo;

The ceremony concluded with state Rep. Terry Canales presenting to the Sanchez family a resolution from the Texas House of Representatives and a flag flown in Sanchez&rsquo;s honor at the state capital. They then lead a small police procession down the new street in their vehicle.

Molina said that the renaming was meant to honor a figure with ties to the Edinburg community as Sanchez was a close friend Cesar Torres, who approached the city with the idea for the new name.

“He chose to risk his life for the safety of everyone and we are so grateful for his bravery. As a former police officer, I feel that loss to my core,&rdquo; Molina said. “So we wanted to recognize him. Now when people drive on [highway] 107 and hit North 10th street and see the name ‘Trooper Moises Sanchez Boulevard,&rsquo; they remember he is a good man that paid the ultimate sacrifice while safeguarding the community.&rdquo;