The intensity and drama that come with the high school football season in Texas is about to get amped up. It’s playoff time! That’s good news for the fans and all those associated with the two high schools from Sharyland ISD, as both Pioneer and Sharyland High qualified for two of the four spots from UIL District 16-5A Div. II. The paths each took to make it were as different as the two teams which greeted head football coaches Tom Lee and Ron Adame when practice opened back in August.

The 2019 Sharyland Pioneer Diamondbacks football team entered the season focused on unfinished business. They even had the letters D – U – B printed on the backs of their practice gear to remind them. The letters stand for “Diamondbacks Unfinished Business”, a reference to the way their 2018 campaign went. 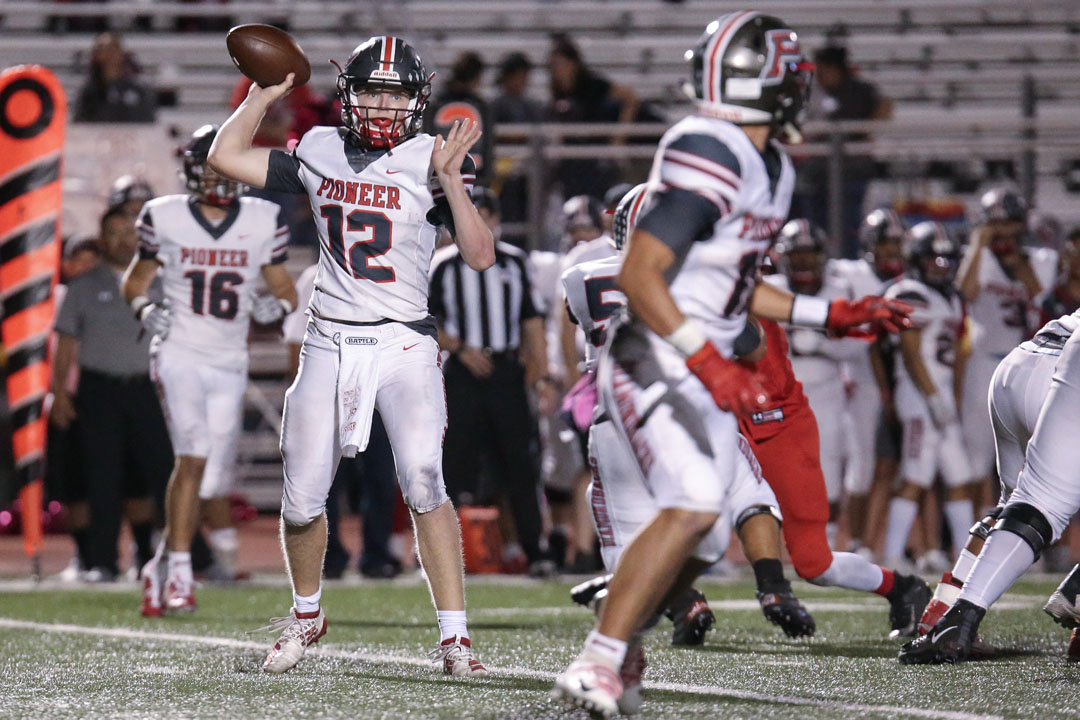 The 2018 season, in particular two games from last year stand out. A one point, last play loss to Sharyland in a game that eventually determined the District 16-5A Div. II championship and another one point defeat in the bi-district round of the playoffs to Port Lavaca Calhoun which ended their season.

A large group of returning players was there to greet Lee when Pioneer opened their fall workouts and expectations were high for a big year.

Another one point loss, to Harlingen High, to open 2019 might have had some of the Diamondbacks faithful wondering if they were snake bit.

“That game was a learning experience,” said Lee. The team has certainly responded. For the last nine games, the Diamondbacks have been T – C – B. That’s “Taking Care of Business” for those of you who have never heard of Elvis.

The numbers since the Harlingen loss are impressive. The Diamondbacks have scored an averaged 51 points a game and have allowed only 24 per game. That’s an average victory margin of 27 per game.

Of course what really matters has been the results. Nine straight wins following the season opener has led to a few of the unfinished business boxes from 2018 checked for 2019. A win over Sharyland in the Snakeskin Classic took care of one item and the Diamondbacks 48-36 over Edcouch-Elsa last week took care of another: an outright district championship for the first time in school history.

Lee sees the results as a tribute to the kids for their efforts and to the coaches for getting those kids in the right situations to be successful.

Next on the list, if completed, will be another first for Pioneer. Since the school opened in 2014 the Diamondbacks have now been in the postseason five straight years but have no victories to show for it. Lee cited a playoff win as the team’s main goal in 2019.

Getting it will not be easy. San Antonio Southside (7-3), finished fourth in District 15-5A Div. II, but according to Lee could be a district champion in many other districts. The Cardinals come into town tonight with a four year playoff streak of their own and have won three of their last four this year.

Kickoff is scheduled tonight for 7:30 pm at Richard Thompson Stadium in Mission.

At the same time that game is kicking off, the Sharyland High Rattlers will be in Port Lavaca doing battle with the Port Lavaca Calhoun Sandcrabs (8-2), the District 15-5A Div. II champions. Calhoun returns several key players from a team that went four rounds deep in the playoffs last year. This season the Sandcrabs haven’t lost on the field since week three. They were, however, assessed a forfeit after their week six win over Alice for using an ineligible player. Calhoun has won five straight since then.

For a moment or two this season it didn’t seem like making the postseason would happen for the Rattlers.

For starters, the 2019 edition of the Rattlers football team didn’t have many . . . returning starters that is. Most of the offense from the 2018 district championship team was gone due to graduation. Some new faces and an adjustment here and there have been enough to get Sharyland back to the postseason for the 12th straight year.

Still the season has been a topsy-turvy one. A season opening win at Brownsville Pace was followed by a loss to McAllen Memorial. Another win was followed by another loss, then a win. A victory over Roma in week six ended the win-one- lose-one cycle and had the Rattlers at 4-2 overall, and more importantly 2-0 in district.

A three game losing streak, two close ones along with the loss to Pioneer, pretty much ended any thoughts of repeating as district champs and put the Rattlers into a week ten game versus Valley View in the Rattlers last game of the regular season that they desperately needed to win.

“We talked to the kids about leaving a legacy,” said Rattlers Adame. A loss would have put their playoff streak in jeopardy and Adame said he wanted his team to know that.

“We weren’t going to hide that.”

The team responded with a 29-6 win and, with a bye in week eleven to get a little rest, is ready for their shot at Calhoun.

“We got back on the winning track and have some momentum,” said Adame.

The task of upsetting Calhoun is next on the schedule and has the Rattlers in a position they have been in before this year.

Being the fourth place team means your first round opponent is a one seed and Adame says that makes no difference to him. He commented on how the Rattlers were seen as underdogs in most of the big games they were in this year.

“We’ve got nothing to lose,” he said. “We’re going to prepare (for the game) as if we were the one (seed) and they were the four.”