Members from the Palmview Police Department and other law enforcement agencies gathered at the Palmview Parks and Recreation Gym last week to mourn a four-legged friend who was one of their own.

The life of K9 officer A’zeus, 14, was celebrated Friday, Nov. 8 nearly one month after he passed away from complications with arthritis that made him retire from the force two years ago. A’zeus was a veteran of the Palmview Police Department. His partner, Corporal Cosme A. Muñiz III and Muñiz’s wife, Gracie, delivered a white urn with his ashes to the ceremony. 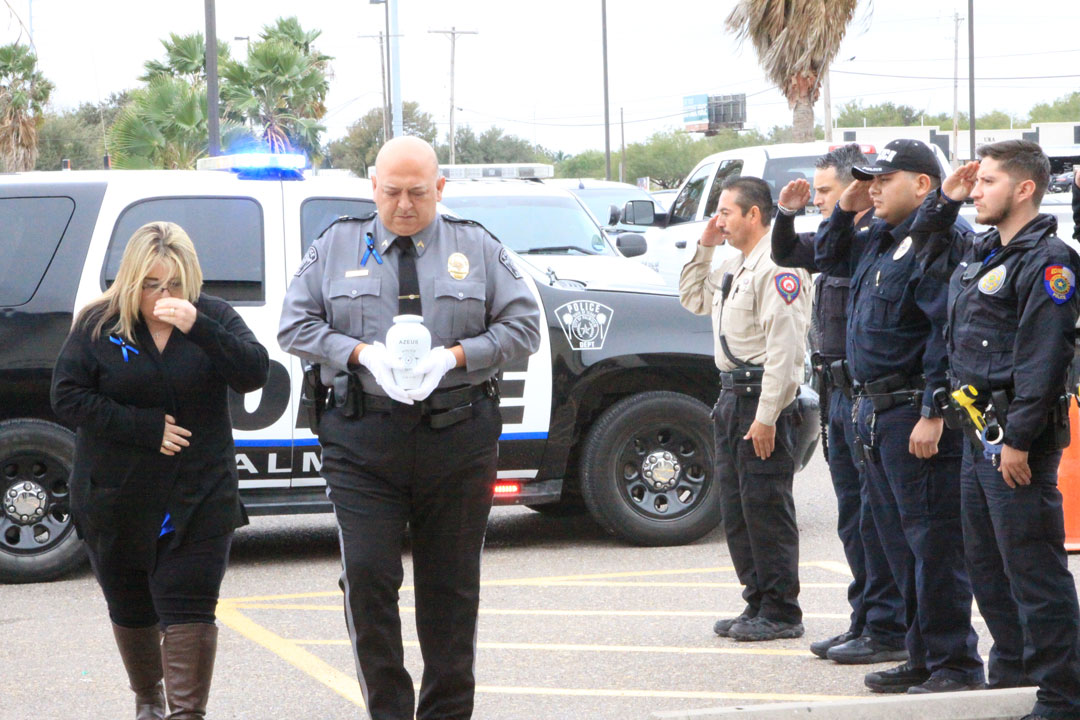 Officers lined up to the entrance of the gym, saluting A’zeus as his partner and Gracie walked by with his ashes.

“A lot of people say ‘he’s just a dog.’ He was the son I never had, the only one who understood me and never spoke back to me,” Gracie said at the ceremony. “I wanted him to be honored the way he deserved. He gave so much of himself to the community and state and his family.”

A’zeus was a Belgian Malinois who served the Palmview Police Department for 12 years who was used for narcotics detection, tracking suspect apprehension and officer protection, according to his bio.

Cpl. Cosme and his partner were often called out to assist in manhunts, searches for missing persons and assist in felony apprehensions and narcotics searches.

A’zeus participated in school presentations for career day and Red Ribbon Week in several school districts in the county. He received state and national recognition from numerous organizations such as the National Narcotic Detector Dog Association and the Texas Narcotic Officers Association.

“He was the perfect partner, I don’t know how I’m going to get another dog like that,” Cpl. Cosme said.

Cpl. Cosme remarked that life for him and A’zeus was difficult as Belgian Malinois dogs are naturally aggressive.

“Nobody wanted to deal with him because of how aggressive it was so I took it upon myself to start to feed him to introduce myself to him,” Cpl. Cosme recalled. “It was weird when I first took him home, my biggest fear was he’d bite one of my kids or wife so he had a muzzle on at all times for the first few weeks for their protection.”

Gracie admitted to being terrified of A’zeus when he first came home.

“When my husband first brought him home I told him, ‘That’s not a dog, that’s Cujo,’” Gracie said. “Little by little we’d feed him weenies to make him friendlier but none of our friends, family or coworkers could ever come to our house because he always had his guard up and we’d worry he’d attack them.”

“Any time we dropped something near the kennel, we knew it was lost because we were too scared to get it back,” Pena said. “We didn’t think we’d get attached to him because he was an attack dog and we ended up falling for him. We showed him affection and he grew to love us and love getting belly rubs from us all and cuddling us. He loved the attention. We were there till his last breath, we didn’t think it would happen. It’s like loving a sibling. We lost a brother.”

In 2017, A’zeus retired from the force due to arthritis and stayed at home, which Gracie said bonded the two.
“He was the only security system I needed,” Gracie said in her eulogy. He was my protector, my baby, my everything.”

A’zeus’ arthritis was worsened when he was given new medication that he had a negative reaction to, leading to organ failure.

“The vet told us it was up to us to put him down or not. I was selfish and begged them to delay it and the vet said he’ll only get worse,” Gracie tearfully said. “We knew he didn’t have long so we made that tough decision to put him down.”

A’zeus passed away surrounded by his partner, Gracie and Peña on Oct. 8. As part of his memorial last week, K9 officers walked up to an altar containing Azeus’ urn, vest, awards and favorite toys to salute him alongside their canine partner.

“He was always there for me and I was there for him,” Cpl. Cosme said. “His favorite thing to do was patrol work,” he said in his eulogy. “He would be ready to work the minute he would see me put on this uniform. He would wait for me at the door barking, sitting and saying, ‘Let’s go, time to go find the bad guys.’ The hardest and most difficult decision of my law enforcement career was the day I had to say goodbye to my partner and longtime companion.”

Javier Solis, a deputy with the Hidalgo County Sheriff’s Office, served as the masters of ceremony for A’zeus’ memorial service. He spoke of the importance to recognize K9 officers for their work and sacrifice.

“They work 40 to 60 hours a week and doesn’t stop there,” Solis said. “They go home with you and protect you there. At all times, officers spend more time with their dog than their families. They are officers, the forgotten heroes of law enforcement who deserve everything any officer with a badge receives.”