With an estimated 200 million children around the globe being exploited and forced to work, a Mission teen led several local artists in fighting child labor.

Last Saturday, the Upper Valley Art League held its first Art for a Cause Auction where members of the league donated artwork to be auctioned off so proceeds could be used to raise awareness against child labor. 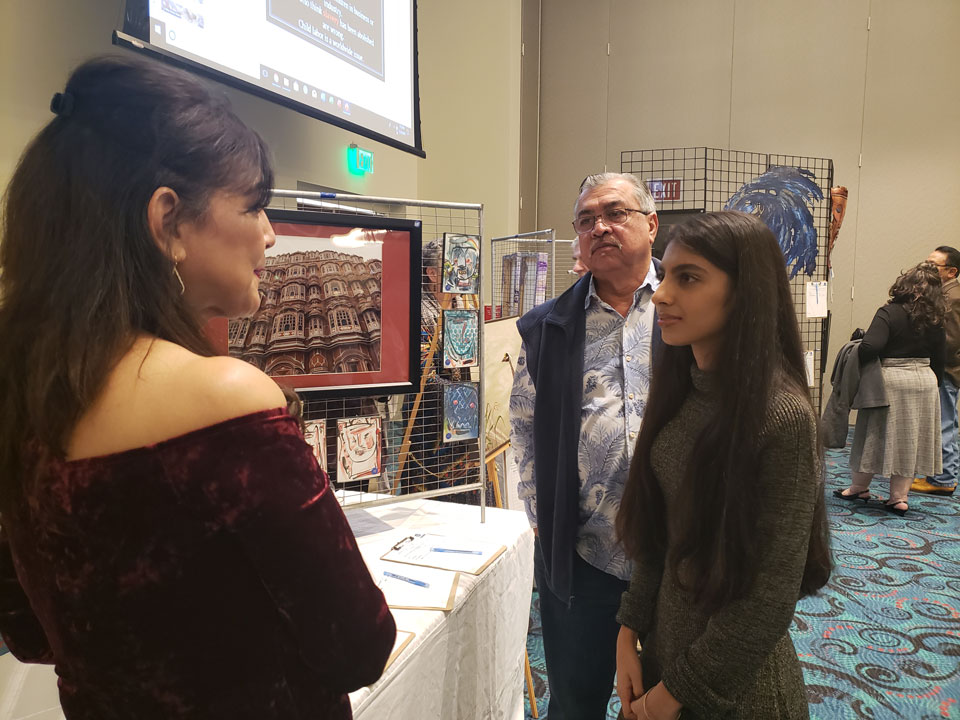 The auction originated after Anisha Agarwala,16, an artist and member of UVAL, approached the board about the possibility of doing a fundraiser to raise awareness on this issue.

“Child labor is the inhumane use of children in business or industries,” Agawala said during a presentation at the auction. “Those who think slavery has been abolished are wrong, child labor is modern day slavery and it is prevalent worldwide.”

As part of her presentation, Agarwala showed attendees a series of images and statistics of children around the world working in dangerous conditions such as sweatshops in China, mines in south Asia, and as sex trafficking victims in the United States.

According to the information website The World Counts, more than 200 million children today are child laborers. 73 million of these children are below 10 years old and an estimated 120 million are engaged in hazardous work and 20 million child workers are employed in factories that make clothes, carpets, toys, matches and hand-rolled cigarettes.

“These children are robbed of their education and innocence, Agarwala said. “Imagine if every child was free, safe and educated, it could make such a difference. Not only are these children working in the fields, they are often injured while doing this and instead of receiving proper treatment, they continue working.”

Agawarla, a Mission resident who attends UTRGV Mathematics and Science Academy, said she first decided to look into child labor exploitation after a trip to India to visit relatives opened her eyes to the issue.

“In India, it’s common to see small children working by going car to car during traffic stops selling small products. I always see it but only last time did I begin wondering why they had to work instead of going to school and began researching it,” Agarwala explained. “It’s what led me to look into the conditions that lead children to be forced to work. It’s an issue we’re all aware of in the back of our minds but we don’t do anything about it. I thought it only happened in underdeveloped nations, but I learned it’s happening everywhere.”

All proceeds from the auction, of which saw more than $2,100 raised as of press time, will be donated to the Kailash Satyarthi Children’s Foundation. The D.C. based foundation is named after the children’s rights advocate who received a Nobel Peace Prize for his three decades worth of championing to end child labor. The foundation works to eradicate child labor and then providing an education to the children recently freed from their hazardous working conditions.

“There’s a relationship between poverty, child labor and illiteracy,” Agarwala said. “We have to break this vicious cycle. Freeing these kids isn’t enough since they won’t have an education. By freeing them and giving them an education, we’re not just giving them a chance at life, we’re giving all their future generations a chance of life so they can enter the workforce in a stable job.”

All the 56 artists who participated in the auction donated a total of 103 pieces of art for the auction. For artist Anissa Salinas, donating her artwork to the auction was ultimately beneficial.

“I used to work for kids so when I saw what this was benefiting I wanted to do anything to help, it’s also a way to get my artwork out there,” Salinas said. “Everyone here believes in the cause. The issue of child labor is controversial but everyone wants to do what they can to stop it.”

As president of UVAL, Maxilou Link said after the auction that she envisions the league holding yearly fundraisers to benefit a different organization. This, she said, promotes the mission of the league.

“UVAL not only promotes the arts, but we promote the betterment of the community,” Link said. “This was a charity that really needed attention. So many times we hang back and take things for granted without thinking about how the clothes on our back happened, when this was brought to our attention it kind of woke us up again. We knew child labor is a big deal without paying attention to it, but everyone should.”

Agarwala advised members of the community to research any products they purchase to make sure it wasn’t created using child labor by going to websites such as endslaverynow.org or participating in the 100 million pledge at 100million.org to pledge to help combat child labor.

“I’m hoping that people coming here walk out with a deeper understanding of child labor, be more aware of it and the fact that they came here means a lot,” Agarwala said. “The more they find out and raise awareness, the more they can fight it.”