If there’s one lesson business owner Kezia de la Garza has learned about running a small business in the last year, it’s this:

“It’s a lot of work, a lot of people are always encouraged to open up businesses but I honestly didn’t know how much it would take out of a person to run it,” de la Garza said. “Owning a business is a lot of hard work and energy, you have to be mentally strong for it.” 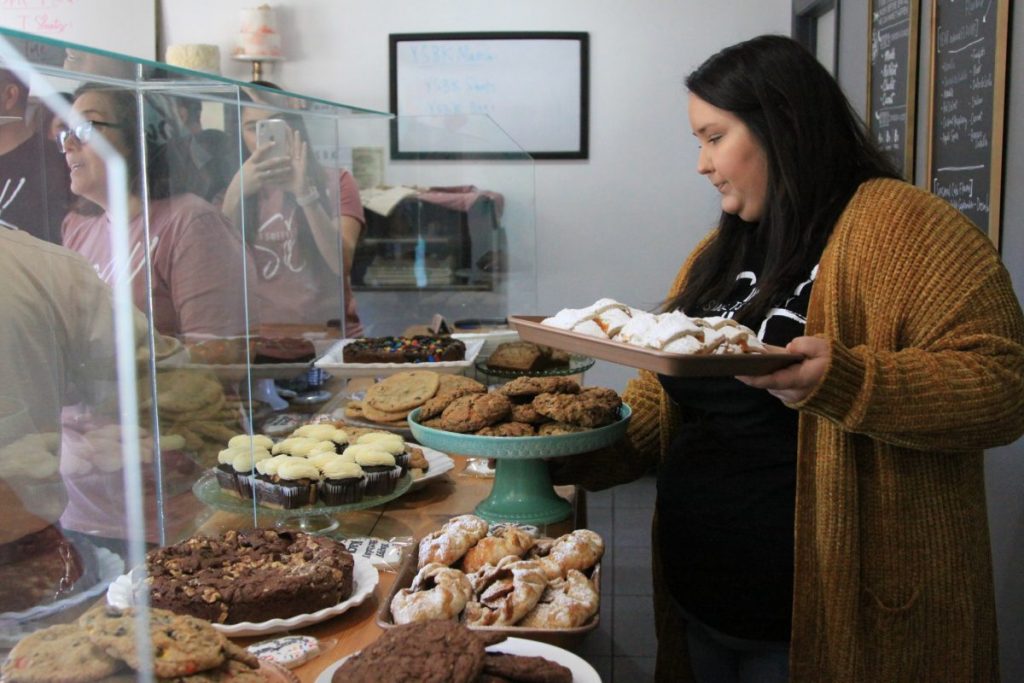 Your Sweets by Kacy owner Kezia de la Garza works behind the counter at her shop during a ceremony to celebrate its one-year anniversary Wednesday, Dec. 4, 2019.
Progress Times photo by Jose De Leon III.

Garza is the owner and baker of the bakery Your Sweets by Kacy, located at 1627 N. Conway Ave. She reflected on this lesson during a Wednesday ribbon cutting ceremony at her business to celebrate her shop’s successful first year.

“We didn’t set up this business to fail, it just wasn’t an option,” de la Garza said.

The shop, which provides a range of sweets such as cupcakes, cookies, tarts, biscottis and their famous cheesecakes (available exclusively on Wednesdays) was packed with customers and members of the Greater Mission Chamber of Commerce who were there to commemorate the occasion as the smell of freshly baked desserts wafted from the kitchen.

“It’s important to celebrate this occasion whenever a local small business finds success,” CJ Sanchez, vice president of the Greater Mission Chamber of Commerce. “It’s a Mission-based business run by someone from Mission and we’re highlighting them for all the sacrifices and success they’ve had in the last year to show the community how they’ve prospered.”

Before becoming a baker, De la Garza worked as a teacher at Agape Christian School and left her job after five years there due to mental health issues. She spent her first year after that on a missionary trip in Romania and volunteering at the bookstore in her father’s church, Mission’s Iglesia del Pueblo.

“Part of that work included bringing in sweets and I’d always order out but I liked the fact that baking and eating sweets always brings people together,” de la Garza recalled. “Everyone in the area gets around with sweet bread and coffee and talked. It reminded me of how growing up in the church, fellowship was important for us. Every time we were together we would come in with bunuelos and other sweets and we’d do it every week. It was our church’s way of providing an environment to bring people together and I wanted to recreate that.”

This led to de la Garza taking baking classes at South Texas College and practice her baking and decorating skills on the side and selling her sweets, de la Garza’s father, Juan, said.

“Eventually, every table at home was filled with different cakes and people would be knocking on our door because they wanted to try and buy them,” Juan recalled. “We knew something special was happening, her vision was coming true.”

After three years of selling from home, de la Garza opened up her shop with the help of her family. Juan and his wife, Rosie who dabble in carpentry and interior decorating, respectively, helped decorate the shop while a cousin created the logo for the bakery and de la Garza’s sisters and cousins work the front and help her in the kitchen.

“Baking helps with the anxiety, it’s a creative outlet for me,” de la Garza said. “I thought owning a shop would be stressful but actually being in the kitchen and baking ended up being such a stress reliever because I’m on my feet concentrating on something and surrounded by my family. It’s exciting to have this ceremony. It’s a lot of work and thankfully I had a support system to make it happen. I feel thankful for them and much closer as a family. I hope customers who come in here feel that closeness with us.”