Three veteran firefighters are working to ensure their new endeavor is right on target.

Kickin Axes RGV, set to open their doors tomorrow (Sat. Dec. 14), is an indoor axe throwing facility located at 1017 Shasta Ave. in McAllen. Owners Mark Koite, Aaron Vera and Jeremy Jensen, who all served in the U.S. military and as firefighters for the McAllen Fire Department, saw an opportunity to bring the activity to the Valley. 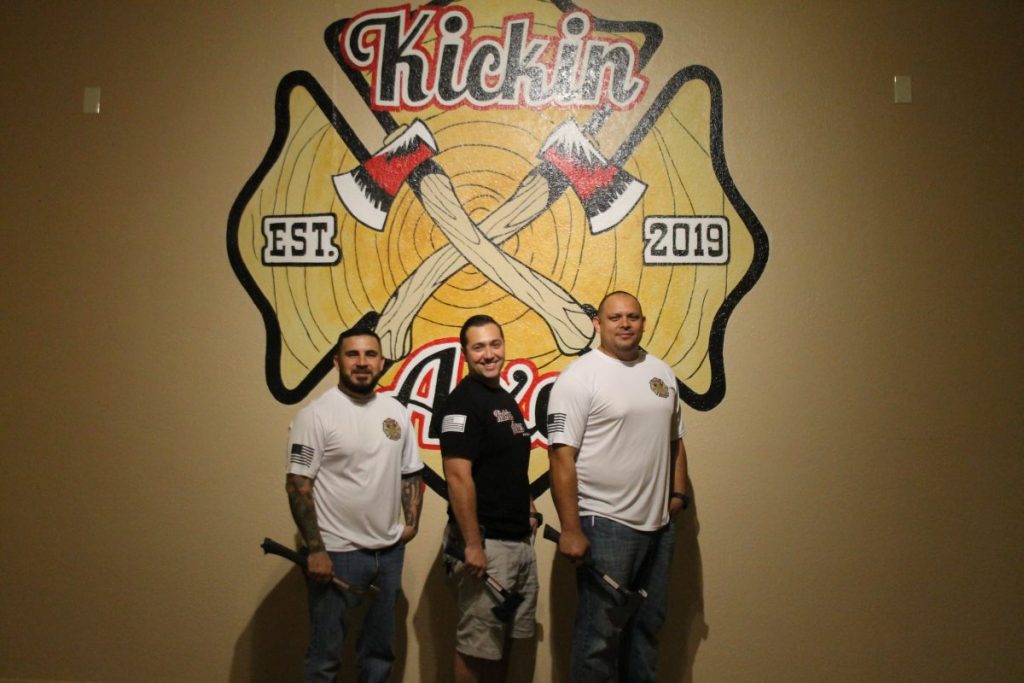 “There was some pushback,” Koite said as the three sat in the space, getting the final touches ready for this weekend. “I got people saying ‘you’re crazy,’ ‘that won’t work here, it’s the Valley.’ So I found people who believed in it like I do.”

Axe throwing works somewhat like darts – a person aims a medium-sized axe at a large wooden target and hurls it overhand (above the shoulder, with one or two hands). It can be done for leisure, but the existence of the World Axe Throwing League and the National Axe Throwing Federation has led to it becoming a legitimate sport.

Patrons at Kickin Axes RGV can rent a lane for $20 per hour (per person), and all three men noted that once a person finds their sweet spot, it’s hard to miss.

For beginners, Kickin Axe coaches will be available to give a brief lesson on the basic techniques of throwing. Patrons will be asked to sign a waiver upon entry.

“There are house rules and there are lane rules,” Koite said. “It’s not just a free-for-all. For the most part it won’t be chaperoned, we’re not going to sit down with you and watch every move you make.”

Koite, Vera and Jensen all want to show that veterans can be counted on to run their business with the same ideals instilled in the military.

“I hold the Army values close to my heart: integrity, loyalty, respect and things like that,” Koite said. “You can count on us to deliver something. We’re trying to put out something we are proud of.”

For Koite, axe throwing has been a constructive way of dealing with Post Traumatic Stress Disorder. A veteran of the Army Reserve out of Brownsville who served for eight years (including a tour of Iraq in 2010), Koite first experienced axe throwing earlier this year.

“My sister-in-law had told me about it; they had gone with some other veterans up in San Antonio, and the vets loved it to get their aggression out and release stress,” Koite said, explaining that they made the trip to try it out themselves. “I went, and I loved it. Like, ‘wow.’”

His experience in San Antonio, along with several other facilities all over the country, inspired Koite to bring the activity to the RGV. When he showed the idea and stats to Jenson and Vera, they were happy to join.

“It just got me thinking, ‘man, there’s nothing like this around here’ [the RGV],” Koite said. “And there’s a lot of vets and first responders who go through PTSD, and they also look for outlets.”

Jensen, a veteran of the Army National Guard out of Weslaco from 2009 to 2017, was glad to see this project come to fruition.

“In the military, you learn about the band of brothers – we’re brothers,” Jensen said. “You hear ‘hey, I’m a veteran,’ and it’s like ‘oh man,’ you have that one thing in common already. It’s important to specify not only for us, but to all our fellow brothers and sisters that have served, they already have that bond with us.”

Vera, a veteran of the Air Force from 1999 to 2007, said that highlighting their veteran background was important.

Koite said that gun ranges are already popular, but it is an expensive hobby that not everyone is interested in.

“I thought this would do well down here,” Koite said. “I came up with a number, found my brothers who I could bear to be around – because they have to bear with me.”

Vera added that their experience as firefighters has also cultivated their camaraderie and ability to work together.

“We lived together,” Vera said. “And it says a lot when we haven’t killed each other yet – if we can live together we can work together.”

Veterans, first responders and nurses will receive a discount, and charged a hero’s rate of $17 per hour (per person).

Patrons of Kickin Axes can bring in their own food and beer. According to Koite this is a pretty standard operating procedure for axe throwing facilities.

Because adult patrons may drink beer, Kickin Axes will have specific hours of operation for families. Wednesdays through Saturdays will be reserved for those 21 and over, and Sundays will be a family day where anyone 13 and older can participate. They will operate on Wed. and Thurs. from 3 to 10 p.m., Fri. and Sat. from 3 p.m. to 12 a.m. and Sun. from 1 to 8 p.m.

“All kinds of people are going to these axe ranges to check it out and they like it,” Koite said, noting that his 10-year-old son already enjoys throwing at their target at home. “It’s for anybody.”

A private room in Kickin Axes will also be available with its own throwing lanes, which can be rented for special occasions and corporate events. The owners are confident residents will find a new avenue for entertainment at the local level in axe throwing, and are excited for tomorrow’s opening.

“We wanted something different,” Koite said, citing the local success of Topgolf, Main Event and Dave and Buster’s. “The Valley was known for good food, and everybody would leave for entertainment. There’s entertainment here now, and [people] want more. It’s fun and it gets you moving.”