Christmas was celebrated last weekend in a trio of events by three cities in western Hidalgo County.

Palmhurst, La Joya and Alton held their annual Christmas celebrations that highlighted, among other things, the spirit of the season in the community. 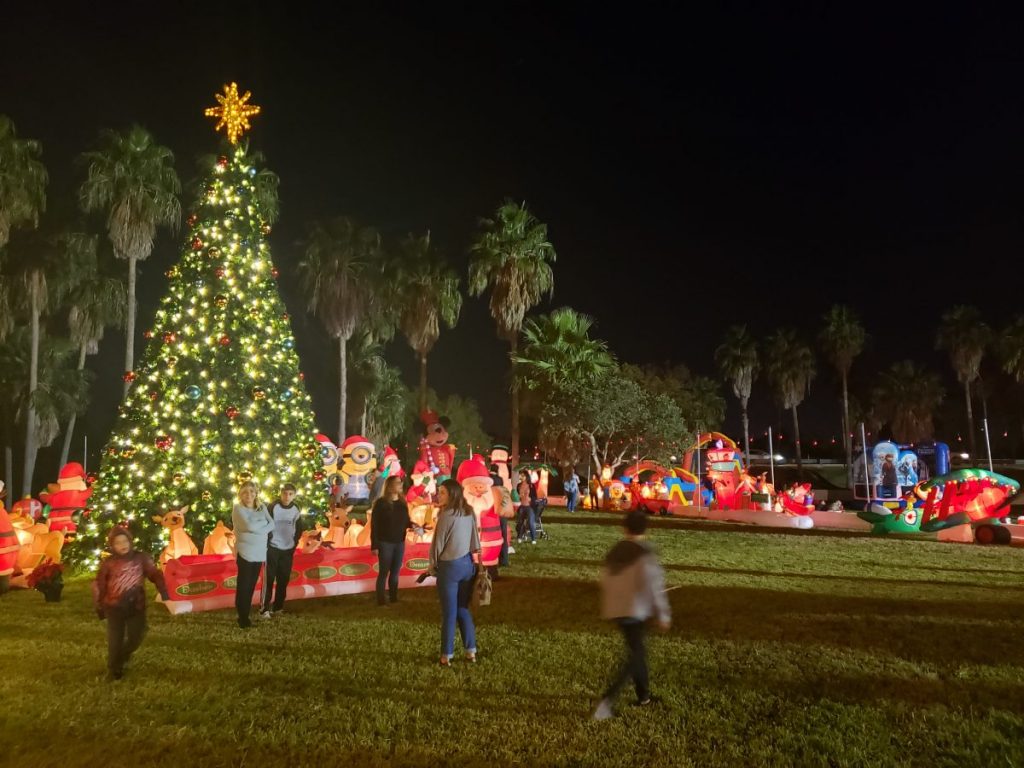 Held Friday, Dec. 13, the event invited the public to attend the lighting of the city’s 30-foot tall Christmas tree housed in the city’s Shary Municipal Park at 4900 N. Shary Road. Attendees enjoyed attractions, food, and a screening of the movie “Jingle all the Way.”

The park, which is only used for city events, was promoted at the event as the city has been slowly expanding and renovating it since 2017 with the hope of making it a must-see attraction in the Valley.

“This is our first park and we’re trying to show the community that we’re giving back to them-this is their park.” Palmhurst Mayor Pro Tem Robert A. Salinas said. “Since we don’t have property taxes we’re trying to put as much money into the park as we can.”

“Everything in the park should cost a total of $300,000 and will be completed within five years,” the mayor said. “This park offers an intimacy that the citizens can enjoy and events like this are why we want the part to be renovated, so it can be open to the public and they can enjoy this. Celebrating Christmas here creates a feeling of togetherness we want residents to continuously enjoy.”

Salinas added that the Christmas celebration is meant to honor residents in the community.

“Christmas is a family affair and these people have been here in Palmhurst for many years,” Salinas said. “We’ve seen how tree lightings are popular in other cities so we decided to do this here for the community.”

Among those in attendance of the event was Maritza R. Luebbers, a McAllen resident who positively compared the event to McAllen’s Annual Holiday Parade.

“It’s beautiful and it’s my first time visiting this park which I didn’t even know was for the public,” Luebbers said. “It’s a nice community and an event like this feels much more intimate and special than you’d expect.” 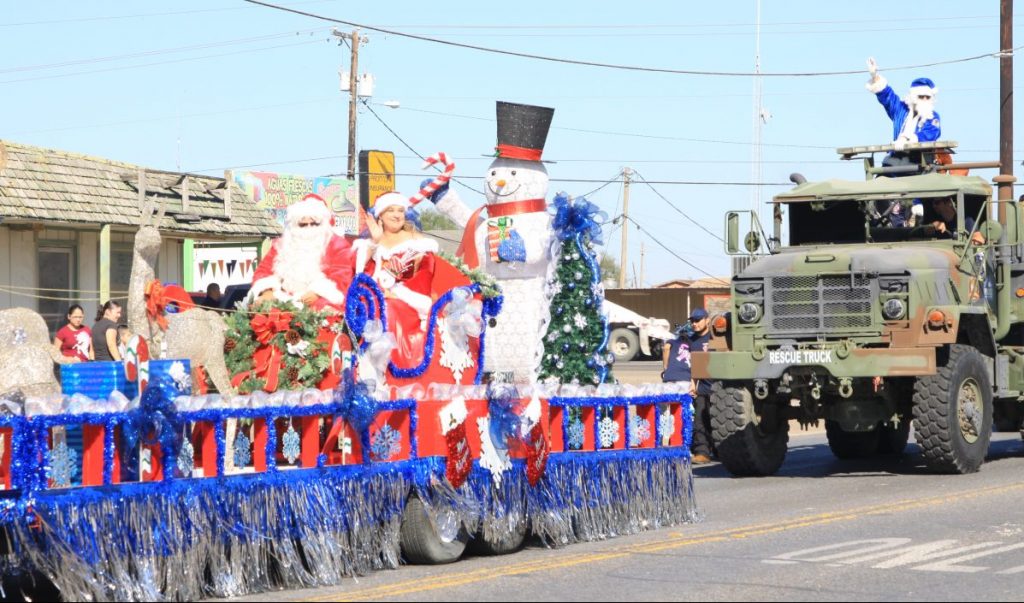 The city of La Joya held its 14th annual Winter Wonderland Christmas Parade on the morning of Saturday, Dec. 14.

The parade had more than 70 entries driving down south Leo Avenue, spreading Christmas cheer to citizens watching the parade.

“It’s historical here in La Joya, something the public looks forward to every year and this year, it was splendid and it was very beautiful, “city Administrator Jacqueline Bazan said. “We had some unique floats which was very nice and we had excellent attendance.”

Bazan was part of the parade as Mrs. Claus in the final float of the procession.

“This parade has become a tradition for us, we want to keep up traditions the community loves and we want them to know that we are providing them with Christmas spirit and celebration through the parade,” Bazan said.

Among those in attendance of the parade were Jessica and George Ortiz. The husband and wife attended the parade to watch their daughter perform as part of the Palmview High School rubies dance group.

“It’s our first time watching this parade and watching our daughter be in it is why we like it,” George said. “We feel proud of her for belonging to a community that she is involved in and lets her participate in this way. It feels like we have each other’s backs and are there for each other. Having an event like this here in the city is fun and I like seeing how it involves students this way.” 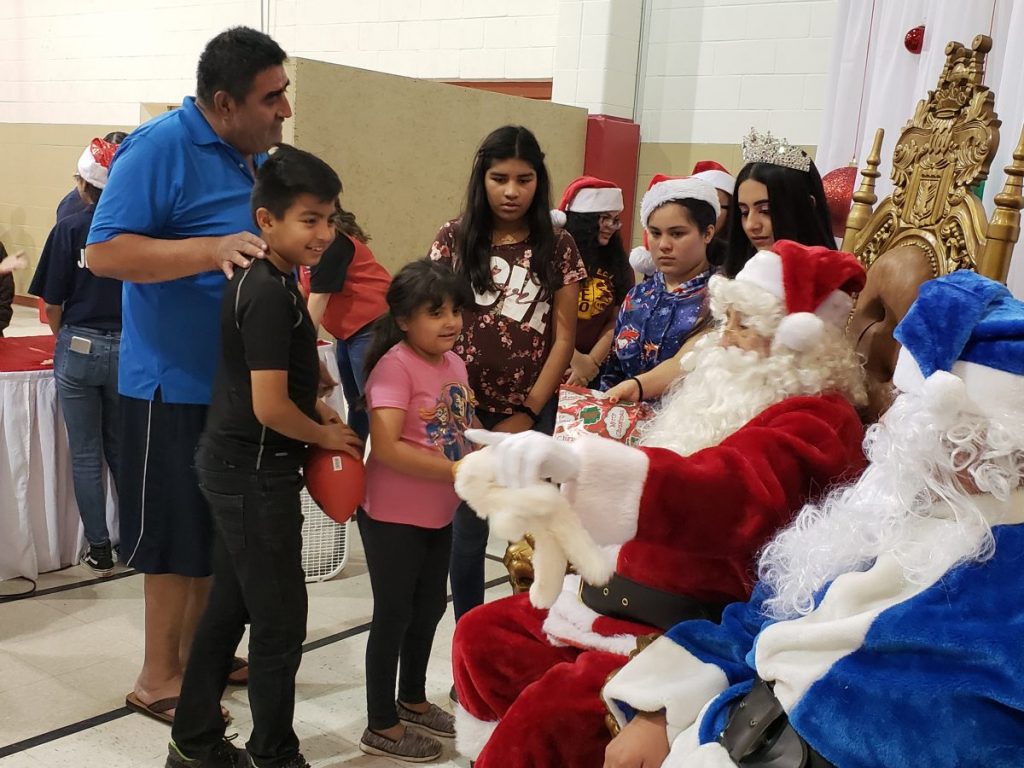 On that same day, the city of Alton held its annual Christmas Parade and Festival.

The parade started on the morning of Saturday, Dec. 14 and continued with the festival that evening. The festival included a toy giveaway, food and live music.

“The parade and festival used to run at the same time but three years ago we split them up,” city Parks and Recreation Director Samm Mercado said. “In the past we’ve had as many as 800 waiting at the Parks and Recreation Center where the parade was at so they can participate in the toy giveaway, and no one was attending the parade.”

With the break between both events, Alton Mayor Salvador Vela said residents can attend both events with a break in between.

“We’re having people from other cities coming to celebrate Christmas with us with these both events and it’s for a simple reason: It’s a hometown parade,” Vela said. “It’s not a big parade with floats from sponsors or big corporations where no one knows each other. It’s an event for the community by the community.”

“Our police department coordinated an extensive toy drive with nearly 1,000 toys being donated from people and local businesses,” Mercado said. “Even the musical acts participating are volunteering for us at no cost. It’s truly an event where we can all come together and just enjoy.”