It was the Battle of Conway baseball style. The Mission Veterans Patriots took the short bus ride to Leo Najo Field Monday night to take on the Mission Eagles in their annual Duel on the Diamond. And while this game does not have anywhere near the hype, or the fan turnout, that the gridiron Battle of Conway does, for the players on the field, it’s as big a non-district game as any they’ll play this season.

With both teams coming off disappointing seasons in which they were left on the outside looking in on post-season play, defeating their cross-town rival could go a long ways towards putting last season behind them and getting their 2020 season off on the right foot. 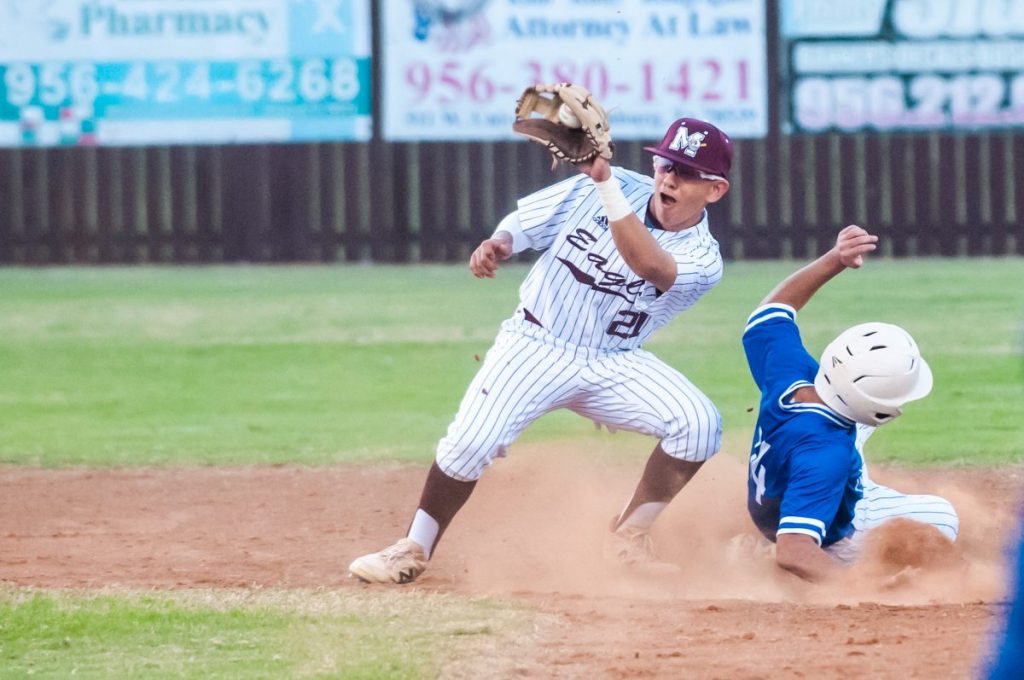 Mission Veterans pinch runner Eric Ramos slides safely into second base as Mission second baseman Lucky Aguilar takes the throw from his catcher during the first inning of the Patriots’ 10-5 victory over the Eagles Monday, Feb. 24, 2020. Progress Times photo by Luciano Guerra.

So which team emerged victorious Monday night? Was it the Mission Eagles that gave their home faithful reason to celebrate or the Mission Veterans Patriots that had a happy, albeit short, bus trip home? By a score of 10-5, it was the Patriots who earned this year’s bragging rights by emerging victorious.

While neither team stayed with their starting pitcher very long, Patriots’ head coach Ben Gonzalez had his starter, Ethan Garza, on a short leash due to the fact that Monday night’s game was one of his first starts ever on the varsity level.

“Ethan is one of our freshmen,” Gonzalez said. “He’s a really good kid but he’s got a lot of things to learn as he’s coming through the ranks as a freshman. He does a good job in doing what we ask him to do. He’s young and he’s going to take his lumps. But he did very well his first two innings.”

In those first two innings, the Eagles only managed to put one run on the scoreboard while five Patriots crossed home plate for a 5-1 lead. Then in the third inning, it was starting to look as if the 10-run rule might come into play as the Patriots put five more runs on the scoreboard to take a 10-1 lead heading into the bottom of the third inning.

“In our scrimmages we struggled with innings in which we gave up big runs early in the game but then we’d shut them down only to not be able to do anything offensively,” Gonzalez said. “Tonight we got going in the second and third innings which gave us a big lead. As a result, all we had to do was to hold on to it.”

While the Eagles did outscore the Patriots 4-0 from the bottom of the third on, it was too little too late as Mission Veterans’ junior pitcher Jaythan Barrera closed out the game and earned the victory in relief.

When asked how he felt going into the game, Barrera said, “I felt great. Since the start of the day when I woke up this morning I had the game already in mind. And as the game progressed I just started getting my mind into the game. All day I was thinking about this game and how I wanted it to go down. And it went down exactly as I wanted it to.”

While Barrera did get some time on the mound last year, it was only during scrimmages. He was then returned to his primary position of shortstop. This year however, he is most likely going to split his playing time between pitching and shortstop. So which of these positions does he prefer?

With two of last year’s final eight teams in the state, the Pioneer Diamondbacks and the Sharyland Rattlers, in their district, you won’t find too many people that will give any other team a shot at claiming the District 31-5A title. However, Barrera is not about to let what others think or say keep him from believing that the Patriots have what it takes to catch everybody by surprise.

“I believe that we can actually compete for a district title.” Barrera said. “It’s definitely possible for us. They (Pioneer and Sharyland High) have great teams, don’t get me wrong. But we have the potential as a team to make the playoffs and even get that district trophy.”

Patriots’ junior third baseman Angel Cienfuegos shared his feelings about what defeating the Mission Eagles meant to him when he said, “It’s the Battle of Conway and it’s been going on for years. We want to keep it going. To take the W against them feels good.”

As the starter in Monday night’s game, Ethan Garza had to overcome the nerves he was feeling on the mound in his first non-scrimmage start on the varsity squad.

“I’ve pitched in two scrimmages and I did pretty good,” Garza said. “But tonight was nerve wracking because it counts against our overall record. Also, it was the Battle of Conway and there were a lot of fans out there. That’s what made it nerve wracking for me.”

As for the Eagles, long time head coach Rick Lozano is having to deal with the fact that he lost the majority of last year’s starters to graduation.

“We’re very, very young and inexperienced and it showed tonight early on,” Lozano said. “It was pretty disappointing but Veterans did a hell of a job hitting the ball the other way. I take my hat off to those guys and to Coach Gonzalez. They did a hell of a job.”

Lozano started sophomore Jeremy Duran and brought in senior Steve Villarreal in relief against the Patriots.

“Jeremy looked very good in the scrimmages,” Lozano said. “But tonight he just didn’t have it. As for Steve, his first inning was kind of slow but he threw four good innings in which he didn’t give up any runs.”