Weeks after surviving a fire in his enclosure, Spike, the National Butterfly Center’s resident tortoise, remains in the animal hospital in serious condition.

Spike, the center’s 17-year-old African Spurred Tortoise, was injured after a fire in late March burned down his home. 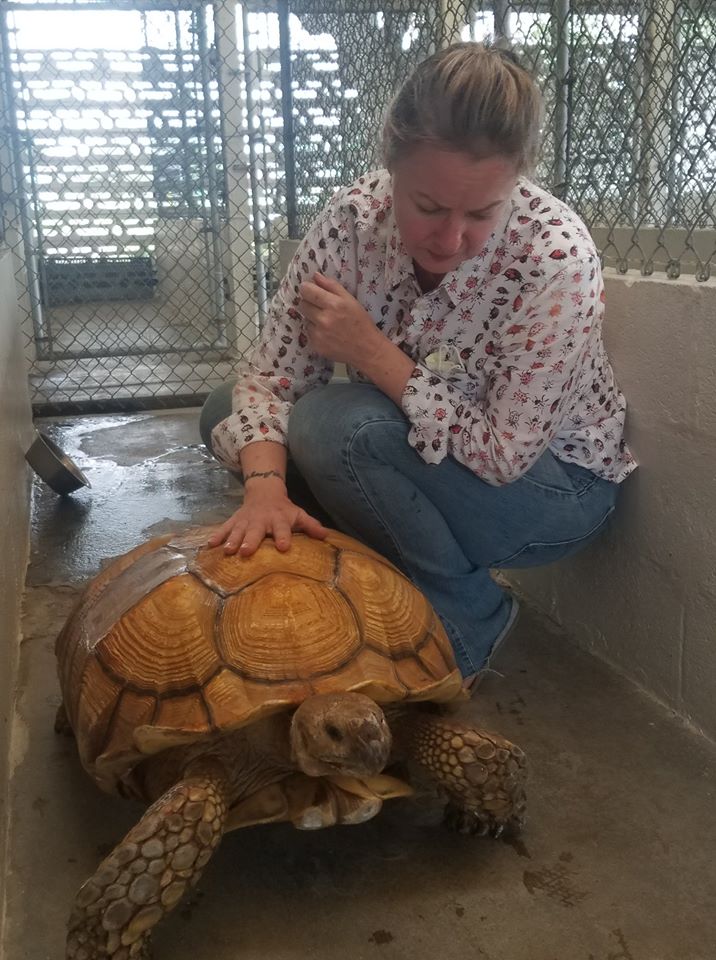 “His hay, bedding, house, tree, leaves, everything was in flames,” Marianna Treviño-Wright, executive director of the center, recalled. “We could tell Spike was traumatized by the fire. He got into his swimming pool for protection so that had to have been his instinct kicking in, but we could see his feet, shell and face were singed and we were worried that there was an issue from him inhaling the hot air or smoke that could result in his lungs, throat and sinuses being damaged.”

The cause of the fire has yet to be determined but foul play is not suspected, Treviño-Wright said.

The Mission Fire Department and a U.S. Customs and Border Protection medic responded to the fire and assisted the center in extinguishing it. Spike was then taken to the Pharr Animal Hospital where he remained there for a few days while he was treated.

“He was given antibiotics, medications for his wounds and evaluated,” Treviño-Wright said. “We brought him back to the center after three days with instructions on how to care for him.”

Spike’s condition, however, did not improve and after a few days he was sent back to the animal hospital where Treviño-Wright says he may end up through the end of next week.

“His scales that were burned the worst are peeling off from his shell, his feet and face remain singed and he continues to have respiratory issues,” Treviño-Wright said. “He can’t smell, he’s blowing snot bubbles and is not eating so we couldn’t give him his antibiotics.  In the wild, the injuries he suffered would’ve been fatal.”

Spike first came to the center six years ago after he kept escaping from his owner’s backyard.

“He was 100 pounds at the time and kept knocking down the wooden fence and walking along 495 in Mission and animal control kept picking him up and taking him back to his owners, Treviño-Wright said. “The third time it happened, the family refused to take him back because they obviously couldn’t take care of him and then animal control asked us to take him in because they couldn’t take care of him either.”

Spike has become a very large part of the center’s youth education and wildlife conservation program. As part of this program, children get to know the difference between a tortoise and a turtle to help preserve the endangered Texas Tortoises. They are also introduced to concepts such as native and non-native species, ecosystems and stewardship, in order to prevent the release of exotic animals from the pet trade into habitats where they do not belong, Treviño-Wright said.

“He’s got a huge fan base because everyone loves him, he’s one of our biggest attractions,” Treviño-Wright said.

Treviño-Wright and her staff visit Spike as often as they can to ensure he doesn’t feel abandoned.

“He recognizes me and immediately comes to me when he sees me,” Treviño-Wright said. “We have to take him out and let him walk around the clinic so he can get some sun and keep his metabolism in check since tortoises have slow metabolisms and as a result, are slow to heal. It’s good for Spike’s spirits, we’re not going to try to bring him home again until he’s done with his antibiotics and is able to eat on his own.”

Keeping Spike at the animal hospital has become costly and bills are piling up, Treviño-Wright said, adding that the initial bill for his first three days of stay was $750.

The center remains closed due to the COVID-19 pandemic, meaning the center won’t see revenue coming in from schools taking field trips there. 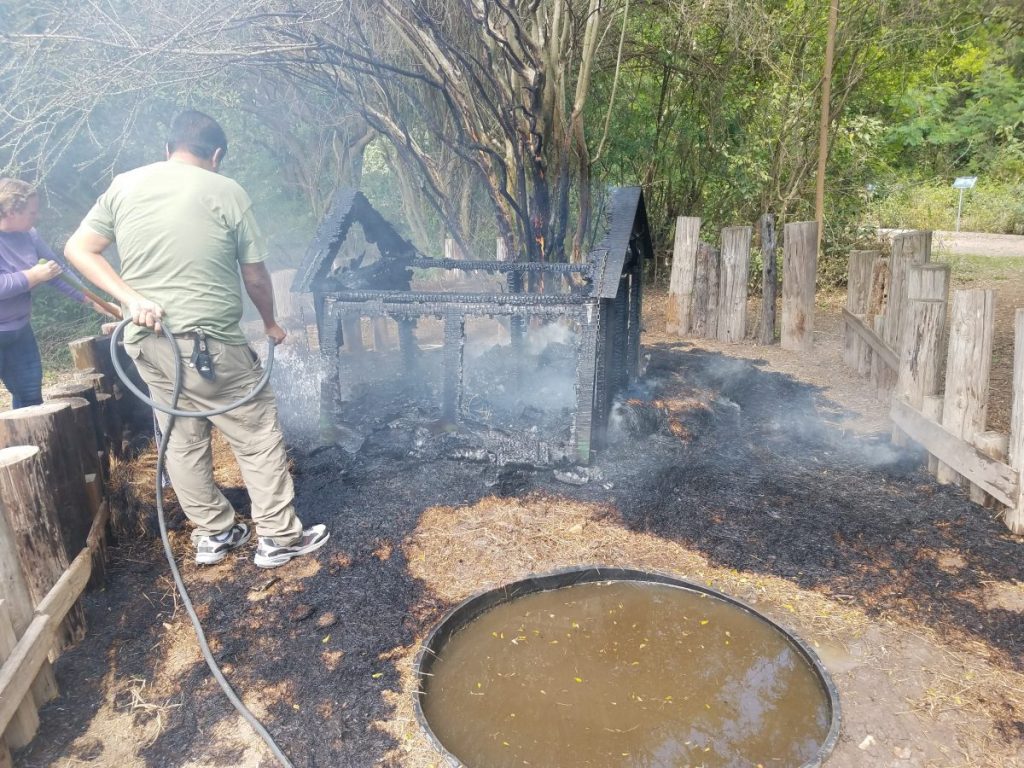 The remains of Spike’s enclosure after it was burned in a fire last month. Courtesy photo

“The money we make from field trips from the months of March through May make up 20 percent of our operation budget. We will not have that income and now we have this additional expense plus payroll and utilities,” Treviño-Wright said, adding that the center is still making payroll to ensure all its employees get paid while the center is closed.

The center has begun accepting donations to help pay for Spike’s medical bills through its website nationalbutterflycenter.org and through its Facebook page at facebook.com/NABAbutterfly/.

State Rep. Oscar Longoria has pledged to help pay for a new home for Spike once he returns to the center, Treviño-Wright said.

“These donations are critical, we absolutely need the expert help from the veterinarian,” she said. “None of us at the center have the skills or knowledge to see this through on our own for Spike.  We want him to recover as quickly as possible.”