Although tortoises carry their homes on their backs, the National Butterfly Center is ensuring its tortoise gets a new home.

Spike, the National Butterfly Center’s beloved 17-year-old, 110 lb. African Spurred Tortoise, was welcomed into a new enclosure Wednesday after his old house was destroyed in a fire that severely burned him last March. 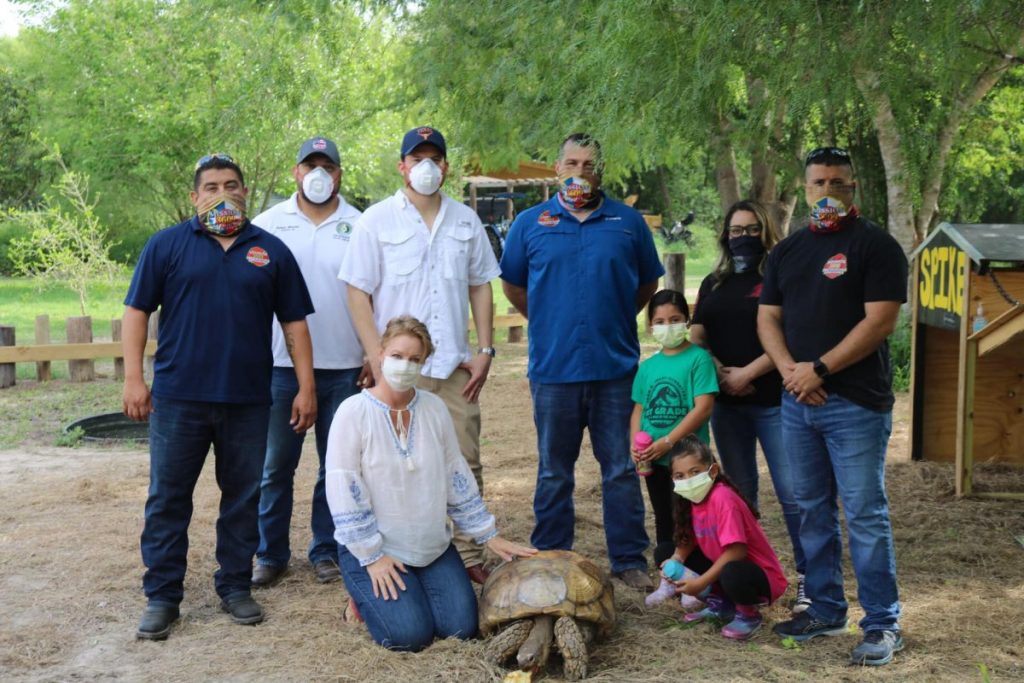 “His enclosure was on fire and Spike had to be pulled out by groundskeepers,” said Justin Longoria, a firefighter with the Mission Fire Department who responded to the fire. “He was in a smaller enclosure nearby, there were power tools and hay lying around and the tree nearby burned and it set his house on fire while he was there. Luckily the severity of his burns weren’t to the extent of him perishing but he did suffer some burns on his face and legs.”

The cause of the fire is still undetermined, Longoria said.

Spike’s injuries required medical attention and he was hospitalized at the Valley Animal Hospital in Pharr for nearly a month.

“His scales that were burned the worst were peeling off from his shell, his feet and face were singed and he had respiratory issues,” Marianna Treviño-Wright, executive director of the National Butterfly center recalled. “He couldn’t smell and was not eating so we couldn’t give him his antibiotics. In the wild, the injuries he suffered would’ve been fatal.”

Wednesday was a different story for Spike, now recovered and back home at the shelter during an opening ceremony for his new enclosure.

Spike, in between munches of apples and lettuce, walked around his enclosure as Treviño-Wright, Longoria and others met with state Rep. Oscar Longoria to view Spike’s new home, donated by McAllen pet store Exotic Tropical Pet World.

The new home for Spike will be painted to look like a fire station by the Mission Firefighter’s Association, of which Justin Longoria is vice president of.

“It’d be fitting since he’s a firefighter himself so he should live in a firehouse,” Justin Longoria said. “We are strong advocates of the National Butterfly Center, it is imperative to our community in getting people out of the house. Staples in the community are important to us.”

Treviño-Wright expressed gratitude for the multiple organizations who have teamed up to help the center with Spike’s recovery.

“We were afraid we were going to lose Spike and the outpouring of community support has been tremendous,” Treviño-Wright said. “The firefighters have basically adopted Spike and they will have a lifelong relationship with him. He can be not only our mascot but theirs as well.  They regularly call or text to check in on Spike and at one point volunteered to house him while we built him a new enclosure. It was heroic how they assisted during the fire.”

For Rep. Longoria, this was his first time visiting the center and seeing Spike. He donated $1,000 to go toward helping Spike recover.

“Him still being here shows how resilient he is and the center does so much for south Texas,” Rep. Longoria said. “It is unfortunate his house burned down and I wanted to support the center in some way. It’s a blessing to have this in south Texas.”

The money will help pay for Spike’s medical bills which have exceeded $3,500 and are still climbing as Spike’s vet is doing house calls every three days, Treviño-Wright said .

“He’s been home for almost three weeks and is continuing to lose his scales and scoots,” Treviño-Wright said. “He’s scheduled to receive antibiotics, have his sinuses flushed, and receive other medications during his house calls for at least another month. We’ve received around $2,500 in donations from the public and Rep. Longoria’s very generous donation will put us about where we need to be to hopefully complete his care.”

Unfortunately, the center will have to depend on donations and grants through next year due to the COVID-19 pandemic lessening tourism to the center, Treviño-Wright said, adding that the center is expected to lose up to 25 percent of revenues it usually makes on end of the year field trips from local schools that have been cancelled.

“We’re going to be dependent on grants until we have a blueprint of operating like normal under the pandemic,” Treviño-Wright said. “We don’t expect environmental field trips or anything like that anytime soon. Business has been slow since we reopened last month and this will be a very difficult year for us since school is not in session and field trips that make up a significant amount of our annual operating income aren’t happening.”

Rep. Longoria pledged to continue helping the center as the Texas Legislature will meet for their new session next January to set the biennium budget for the state.

“Unfortunately we’ll be in a financial pickle all over the country so it’ll remain to be seen how much money we’ll have to be able to spend and send to cities and non-profits in the area,” Rep. Longoria said. “If there’s anything the state of Texas can offer, we can help as much as we can.”