As drum majors for the Sharyland High School marching band, Jadon Geathers and Jorge Osvaldo Guerra Jr. were expected to set an example for their bandmates on and off the marching field as the faces of the organization.

During the previous marching band season last fall, Geathers and Guerra Jr. orchestrated the 200 marching band students and members of the color guard in their latest show. 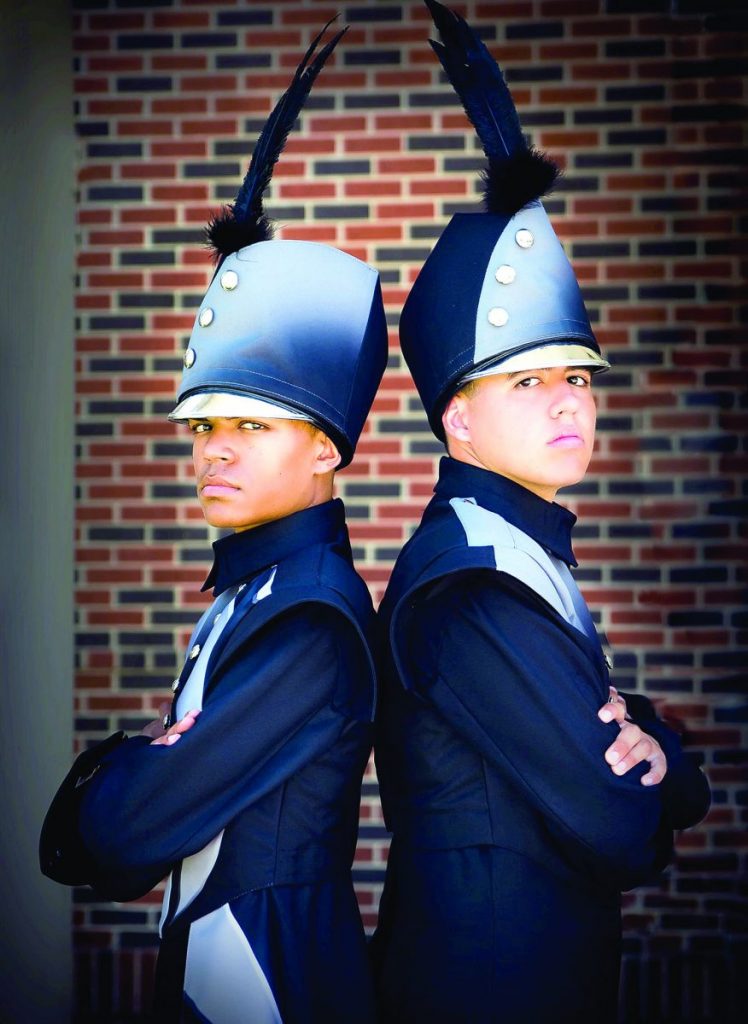 “It was one of my favorite things I’ve done in school,” Geathers recalled. “Playing an instrument requires a lot of patience and dedication and being in a band requires a lot of time management. It’s a really demanding program to be a part of, especially when you’re leading the marching band and often have to stay for hours after a long school day.”

Guerra Jr. agreed with his friend.

“Band is the organization that taught me the importance of leadership and how serving others made me happy,” Guerra Jr. said. “It teaches people to be responsible and not rely on others for your own actions. It helped and prepared us for going to university.”

This fall, Geathers and Guerra Jr. will continue their education in Ivy League schools and are in their graduating class’ Top 10.

Geathers, salutatorian for his class, will be attending Stanford University to study physics.

“It has such an amazingly diverse student population with people from all over the world and it has prestige in the STEM field I am interested in,” Geathers said. “It’s an environment where everyone motivates each other, do well and everyone helps each other succeed. That appeals to me. It’s an honor to be selected for these universities and it’s fulfilling to have your hard work pay off and have the opportunity to attend such a prestigious school.”

Geathers will be attending Stanford thanks to a $160,000 scholarship from the prestigious university that will cover his first two years of tuition.

“It’s an amazing experience to have this recognition,” Geathers said. “It helps me pay for school and I am so grateful to be selected; it’s very rewarding to know all the achievements I’ve had in school and all I did can get recognized like this. It shows that hard work and dedication will always pay off.”

Guerra Jr., who is ranked 4th in his class, will be attending Harvard University to study biology on a pre-med track to become a surgeon.

“There’s a depth of opportunity at Harvard that best fits my personality. I want to discover the person I am and the academic diversity at Harvard is a valuable thing to experience and I believe I can learn a lot from the people there,” Guerra Jr. said. “I was accepted to 14 other colleges but Harvard was set apart because of the image it has. I figured I’d be able to make and establish relationships with people there that will last a long time.”

Both students credited their roles as drum majors, and the band organization, for their academic success.

“Us going to Ivy League schools sets an example for people willing to dream of going there in the future,” Guerra Jr. said. “It says if you want to do something and work hard, you can achieve it no matter how far-fetched it seems. I am proud of how we turned out and set a good image for the organization and represented all the qualities and traits the band organization stands for.”

Geathers said the experience of serving as drum major has strengthened the friendship between him and Guerra Jr.

“As best friends and co-drum majors I’m happy both of us are able to continue our friendship and academic endeavors at Harvard and Stanford. It’s awesome,” Geathers said. [Guerra Jr.] is a really amazing and driven individual who has motivated me so much. It feels like we’ve been accepted into these schools on the basis of our leadership and as the face of the band so it’s really nice that we get to represent the bands by going to these institutions and it underlines the excellence expected of the band program and all the individuals in it.”

Geathers said band served as an outlet for him when he was stressed from all the 16 AP courses he took throughout high school and his other roles as a captain of the UIL Science team, a member of the UIL Advisory Board, National Honors Society, the Asian Club, the volunteer organization Operation Smile and the French Club.

“It was a lot of work and it could get overwhelming, but I overcame these challenges by learning when to say no and involving myself in activities I wanted to be in,” Geathers said. “Band felt like it was my own passion. I really loved music and learning and participating in it was something rewarding compared to something that might’ve overburdened me.”

As a drum major, Guerra Jr. similarly faced pressure from having to lead his fellow students but was able to push himself to continue.

“We always tried to make the best show possible for our audiences to enjoy. It wasn’t always easy, a lot of criticism comes at you as a leader but there were a lot of good memories and challenges that helped me grow as a person” Guerra Jr. said. “Being a drum major is about leaving an impact on the band and I wanted to be remembered and the band gave me some of the best four years of my life so I wanted to leave a mark for people to follow or surpass. Hopefully the next drum majors after me will be better at this than me because I inspired them, that’s the mark of an excellent organization.”

In the end, Guerra Jr. will always be proud of his time as a drum major and cherish his relationship with Geathers, he said.

“The whole experience has made us each other’s best friends,” Guerra Jr. said. “We’ll be going to different sides of the country for college and we’ve both faced difficulties in school but through it all we’ve been together with a strong bond and great communication. It felt great being side by side with someone who supported me as much as I supported him.”