By the time Sharyland school board trustee Ricardo “Ricky” Longoria arrived at the district’s administrative offices, it was still dark.

Longoria would soon be joined by district superintendent, Dr. Maria Vidaurri and other school board members early Sunday morning on the eve of the first day of school not to work, but to devote their morning for their community. 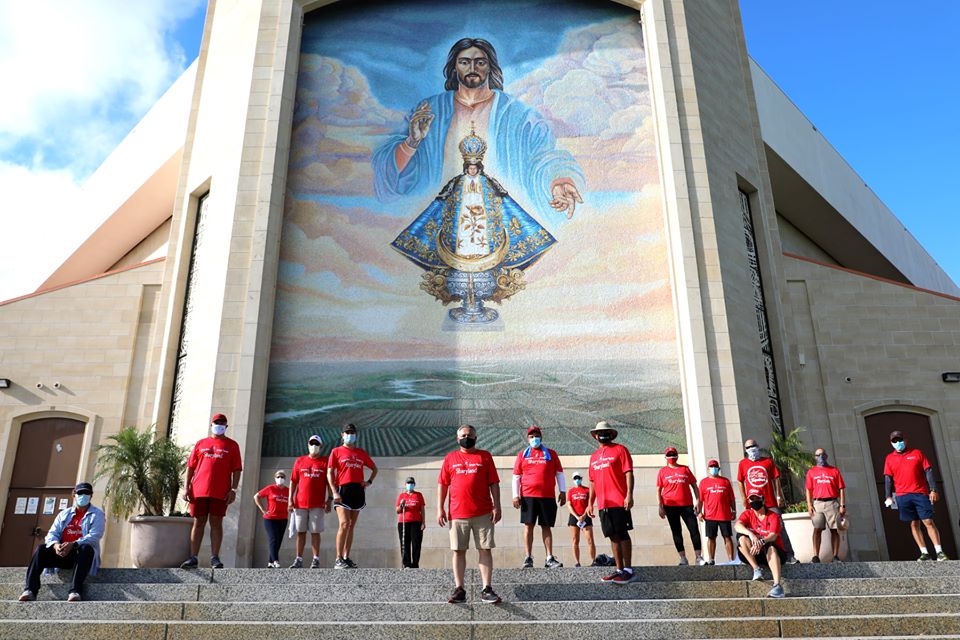 Officials with the Sharyland school district at the mural Basilica of the National Shrine of Our Lady of San Juan del Valle Sunday, Aug. 16, 2020. Courtesy photo.

The seven-member school board was joined by principals from the district and other district administrators to complete a nearly 9-mile long walk from the district offices in Mission to the Basilica of the National Shrine of Our Lady of San Juan del Valle.

“We’re about to start the most challenging school year we’ve ever had,” Longoria said at the end of the nearly three-hour trek. “I just thought it’d be a good idea to gather the school board members and leadership in the district and come together in prayer in addition to everything we’re doing. It’s an opportunity to give prayer for the benefit of students and the community.”

The Sharyland officials-totaling more than a dozen-gathered at the administrative offices at 5:45 a.m. and, after a group prayer, began their walk half an hour later. With school in their district set to begin the following day-albeit virtually due to a current county delaying the start on in-person learning-the group traveled down Business 83 and arrived at the basilica just as the church bells struck 9 a.m.

Officials, dressed in red shirts proudly proclaiming “Strong apart, stronger together,” reflected on the challenges the community would face in the coming year. Sharyland joins other school districts across the country going digital by preventing large gatherings that could potentially spread the COVID-19 disease that has killed 955 Hidalgo County residents as of Sunday.

“With the pandemic it has affected so many in our district and the way we are teaching, it’s totally new,” Longoria said of the coming school year. “It’ll certainly be a challenge but I know the community will face it together and I think this thing we’re doing will help with that process.”

The district has prepared for the incoming virtual semester by purchasing more than $1 million in Chromebooks to ensure every student in the district would have a Chromebook to access their online classrooms through September 28, when Sharyland will be allowed to allow students back on campus.

“We talked in the spring about the possibility of doing school like this and it’s unfortunate we’re where we are at but we wanted all our teachers and students to have all the tools they would need to be prepared,” Longoria said.  “They have the tools, and can now use them to educate the students.”

Longoria added that he knows from personal experience that even students are worried about the new school year.

“My youngest will be a senior at Sharyland Pioneer and I feel for him,” Longoria said. “Like other seniors, his senior year will not be what he or others had imagined it would be but I’m confident the school will still provide a fantastic educational experience, but they will have to do it from home.”

The walk ended with district officials going down the basilica’s Stations of the Cross walking trail to the mural depicting Jesus Christ outside the church.

“It will complete the sacrifice we’ve done today in one last prayer before resting for day one of school tomorrow,” Longoria said. “It was a spiritual, self-reflective time we all experienced.”

As he joined others in breakfast tacos on the basilica’s parking lot, he recounted how he was originally planning on doing the 9-mile trek by himself before deciding to tell his fellow school board members about it.

“They jumped in and the group grew to include key leaders in the district,” Longoria said, adding that they kept the group small to be able to social distance along the walk. “I thought there had to be something more we could do for the community and I noticed we haven’t given a little of ourselves for God in prayer. That’s why we’re here.”