Under normal circumstances, band directors such as Arnold Salinas from Sharyland Pioneer High School would be spending their last few weeks of summer overseeing his students out on the field as they prepare for their marching band season.

These last few months, however, have not been normal circumstances, as evidenced by how the Sharyland Pioneer High School marching band has been taking virtual classes through Google Meets during their summer band camp. 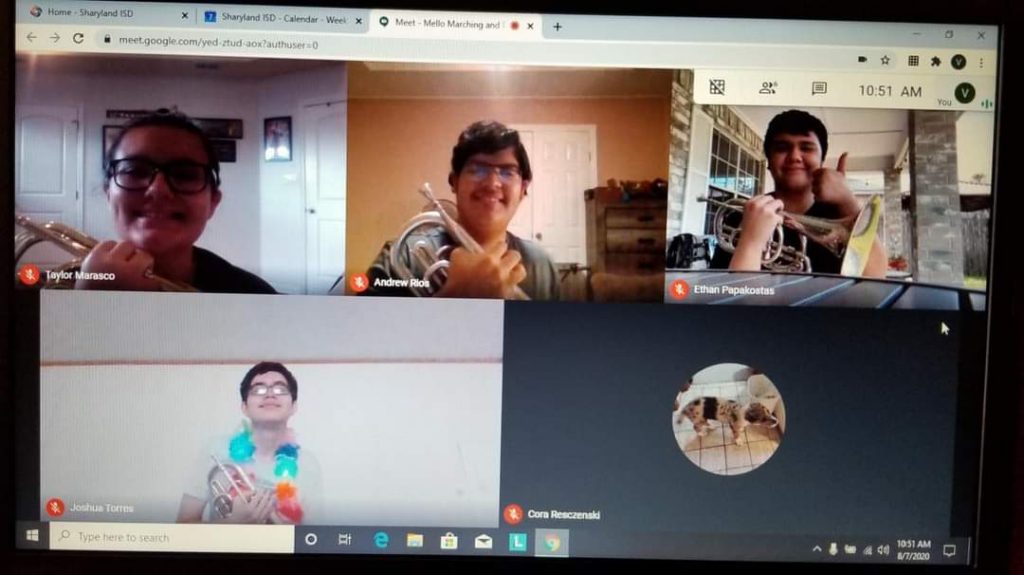 “We were wary of it but it’s been an absolute dream, everyone has shown great rehearsal etiquette,” Salinas said. “It started last month, we split the band by section, meet in hour and a half blocks and cover a visual block for marching techniques and a block for rehearsing music and other fundamentals.”

The Sharyland Pioneer High School marching band is meeting virtually due to the COVID-19 pandemic that caused the closure of schools last March to mitigate the spread of the contagious disease. Per a county order, Hidalgo County schools will be allowed to re-open late next month.

Until then, however, marching band students will continue to be taking their classes online. Whether or not they compete, however, is another story.

The Music For All organization announced last month that it’s Bands of America marching band contest has been cancelled for the 2020 fall season. In its place will be the UIL area competitions as the organization has released guidelines for conducting the marching band season under the pandemic.

“But the first UIL competition has been delayed until late November, usually it’s held in early October,” Ruben Adame, Region 15 UIL secretary said. “It will allow a little bit more time to see how this will unfold over the next few weeks.”

Some districts have opted out of participating in any marching contests, according to Adame.

5A and 6A Districts in the area committed to participating include the PSJA, McAllen, Mission and La Joya school districts.

According to Adame, the UIL Regions 14, 15 and 16 (which cover the Valley, Laredo and Corpus Christi) have around 30 to 35 schools participating in marching band contests per area. This year, each region has around six confirmed bands participating.

“Some of these schools are on the fence and waiting for direction from district administrators on how to proceed,” Adame said. “It’s a lot of obstacles, hurdles we need to climb over that’s making this year so different”.

Adame also serves as the fine arts director for the La Joya school district and said the high schools in his district are practicing for an “easy” marching band show consisting of just two songs and 10 visuals, or “drills” compared to the 100 visuals a regular marching band show features.

“It’ll be nice music the audiences can enjoy to provide some sort of comfort to our community and district and kids to give them the opportunity to get out on the field and perform,” Adame said. “Other districts will probably do something equally doable that’s not overwhelming to give the opportunity to kids to get on the kids and perform – if we’re allowed to do that.”

The Sharyland school district is currently on the fence as to whether or not to compete, Salinas has said. As a result, he couldn’t provide a preview of the show his students were working on.

“Marching band is up in the air, there’s no definite answer,” Salinas said. “We’re planning for the worst but hoping for the best. We have a few options and possibilities.”

Over the last two weeks, the school has been holding practice sessions with the whole band for the first time.

“It’s much harder to do that because we have so much to cover in that block. We encourage them to practice even when they’re not in their blocks,” Salinas said. “Having the entire band earlier in the summer together wasn’t going to work in our setting but it’s created more individual accountability to focus on individual students.”

Though he admitted to feeling disappointed that he’s not seeing his students in person, Salinas said he is checking in on each student.

“The very first day of our summer camp I made sure to visit every section to see them. There’s something about reaching out to them and checking in on them and seeing them respond back that makes up for the disappointment of not being able to see them in person,” Salinas said. “Student safety is the priority so even though this is different we’re still working. I miss my kids and our daily interactions but I understand why it’s like this. These are the cards we’ve been dealt with and I’m just happy we’re still making it work.”