Southern Fried, a restaurant based originally in McAllen, has arrived in Mission.

One of the charms of the establishment, which boasts a menu of fried fish filets, shrimp, chicken strips, wings and homestyle sandwiches, is that it is local, and family-owned and operated. Conveniently located just two minutes from the Progress Times office, Southern Fried has taken up residence at 1505 N. Conway Ave. 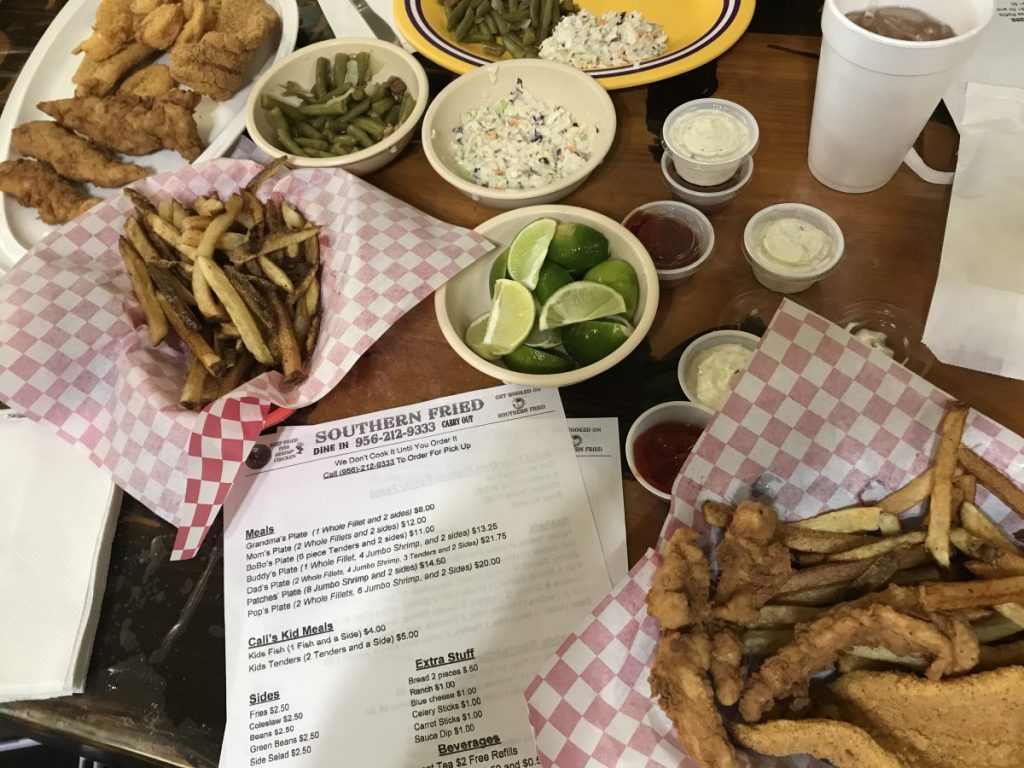 A couple of entrees at Southern Fried, located at 1505 N. Conway Ave. in Mission. Progress Times photo by Jamie Treviño.

The atmosphere at Southern Fried is homey and comfortable. Walking in we were greeted by a friendly waitress, who wore a mask properly and recommended everything on the menu.

The sweet tea was definitely sweet, and our food was served pretty promptly after we ordered. My boss and coworkers were impressed with the service, as well as the quality of the food.

The limited menu is a distinct advantage for local restaurants, because it ensures a consistent quality of menu items. Look at the popularity of Cane’s – a fast food chain that serves chicken and chicken only – with a few variations.

We were pleased to discover that everything apart from the ketchup – from the food, condiments like tartar sauce and cocktail sauce, is made fresh, in-house. Everything complimented the food, which was the highlight of the afternoon.

I ordered the Fish & Tenders Basket, which included one whole fish filet, two chicken tenders and a side of my choosing. I went with fries, naturally.

The batter used was tasty but light – and I mean light as in it was not greasy. Usually following a meal of fried foods one tends to feel a bit heavier, but this meal did no such thing.

The filet was perfectly crispy, and when drizzled in lime juice and dipped in the tartar sauce it felt authentic, like we were eating at the beach. The chicken tenders were truly tender – they fell apart in my mouth, in a good way, and rivaled the likes of other fried chicken that usually leaves an oil slick on my fingers.

When we arrived, there weren’t any other customers – but that changed as the lunch rush began and several groups began filing in to support the establishment. As we ate, the soundtrack of the restaurant was engaging, but not overwhelming.

The voices of David Bowie and Elton John were among the tunes played over speakers, which weren’t overly loud. My coworkers and I did enjoy the conversation, as well as the playlist.

The prices were reasonable considering how everything is made in-house, and it’s not so expensive one will break the bank dining there. The owner, originally from Georgia according to Yelp, greeted us at our table during the meal to see how we were enjoying the food.

She let us know that the brunt of the cooking is done by herself, her husband and their 23-year-old son: truly family operated, with love in every bite. Southern Fried has found a new home in Mission – it should be supported so we can keep it here.

At Southern Fried, they note that nothing is cooked until it is ordered. They are available for dine-in, and people can also order for pick up by calling (956) 212-9333.