While things have been difficult lately, the Catholic War Veterans Post 1065 still had the opportunity to celebrate Veterans Day with the city of Mission.

This past Saturday, November 9, the city of Mission held a barbecue drive-thru giveaway for veterans across the community. Vets could make a stop at the Mission Event Center and pick up a free plate to-go, in honor of their service, while still remaining socially-distant. 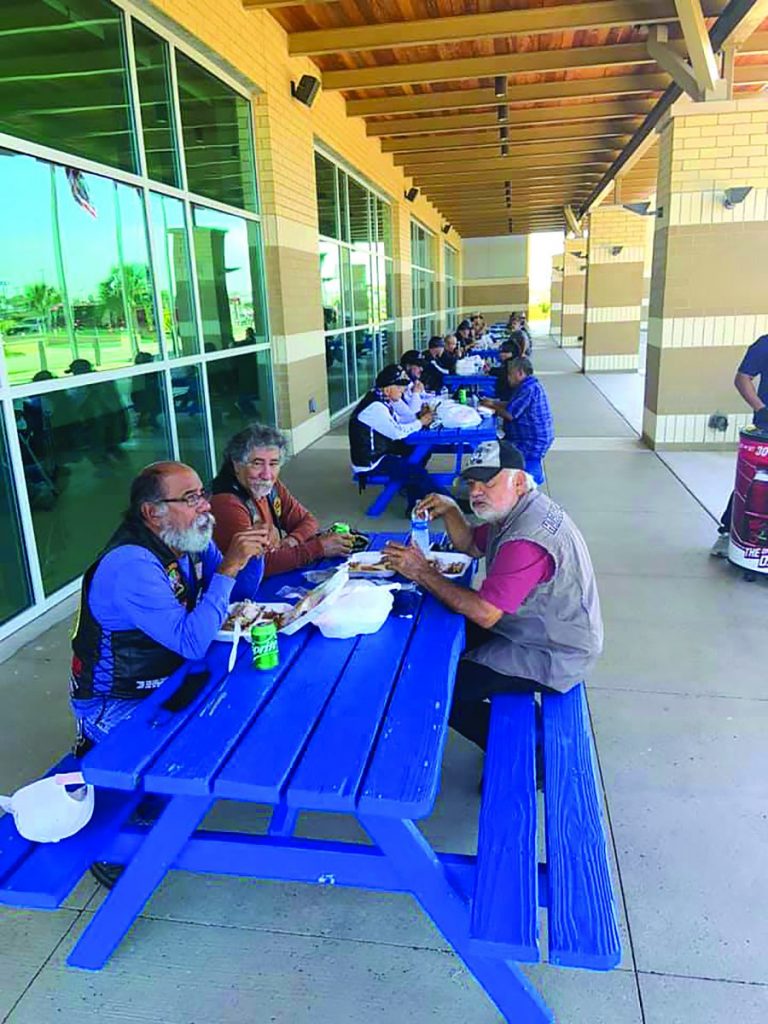 Local veterans enjoy barbecue plates outside the Mission Event Center after picking
up a free meal from the city. Photo courtesy of city of Mission Facebook.

“It was very well attended, the plates were nice and well served from what I understand,” Garza said. “I’m very appreciative, myself, for what the city of Mission has been doing lately.”

Garza is a veteran from the Vietnam era, having served in the United States Air Force from 1969 to 1973, giving air support to the Army and Marines on the ground in Thailand and Vietnam. He currently serves on the city of Mission’s Veterans Committee.

“This is the first time a Veterans Committee has been established,” Garza said, adding Mayor Armando O’caña facilitated its creation. “It’s something that us veterans appreciate, because we know having a committee on veterans issues will help the veterans within Mission and the surrounding area, Alton, La Joya.”

Veterans Day was celebrated Wed. Nov. 11, 2020. Garza noted it is important to keep the support going for veterans all year long, particularly in the face of the pandemic.

“The entire nation is suffering,” Garza said. “A lot of veterans are disabled, they cannot hold a job for whatever reason. With the pandemic, it just makes it even worse for veterans who are unemployed – some are homeless.”

Garza said they were able to serve the nation in every obstacle it has faced.

“Veterans appreciate, in turn, what the American public has done for us,” Garza said. “

Due to guidelines barring certain establishments from fully opening due to the pandemic, Garza said the CWV Post 1065 has seen a significant decrease in rentals and turnout at their event hall, The Lounge.

“Like all businesses who depend on selling beer, or renting out halls, it has created a problem that we are not open to the public,” Garza said. “We’re losing a lot of revenue.”

Garza said they are glad and thankful for the city’s help during these trying times, and were grateful they have expressed their support at every turn in recent years.

“They came through a couple of months ago, giving establishments $500 to help out with utility bills – it doesn’t go far enough, but it is a help,” Garza said.

According to Garza, thanking veterans, particularly elderly veterans, for their service, goes a long way.

“It means a lot, and I speak for most veterans when I say that when a civilian thanks us for our service, it brings a little joy to our hearts that someone still appreciates veterans,” Garza said.

The Mission drive thru event served 1,000 plates in 27 minutes, highlighting the widespread presence of former service members living in the community.