Business owners Maribel Diaz and Esmeralda H. Solis became the directors of Agua SUD Districts 1 and 3 after being sworn in last week to the Agua SUD board. Since the creation of the utility district in 2005, no woman has served on the seven-member board. 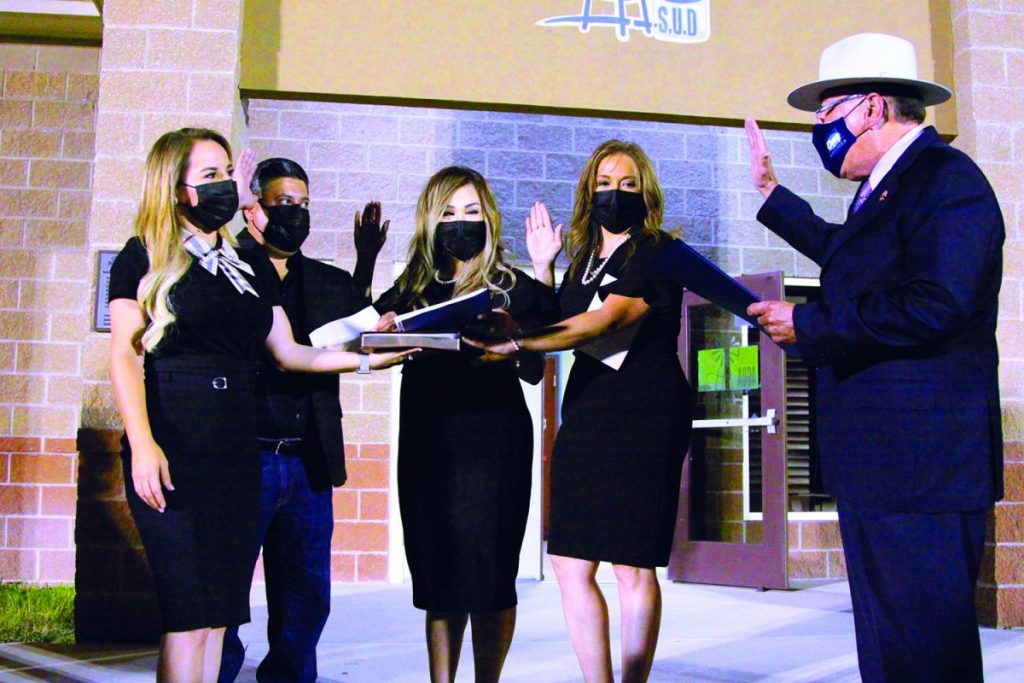 “And now there’s two women serving on it,” Solis said during a swearing in ceremony held Thursday, Nov. 12. “It feels incredible, 2020 has been a year of women in power with Kamala Harris becoming the first female vice president and now we’re seeing women directors on a local level.”

Diaz and Solis beat out incumbents Esequiel “Zeke” Ortiz Jr. and Franco Lopez during the Nov. 3 general election with 51% and 68% of the votes, respectively. They were sworn in by state Sen. Juan “Chuy” Hinojosa who remarked on the historic occasion.

“Isn’t it great seeing women get involved?” Hinojosa said to the crowd who had gathered at the Agua SUD parking lot to watch the ceremony.

Board Director Homer Tijerina, who was elected for a new term, was also sworn in to the ceremony that was attended by local figures such as Congressman Henry Cuellar, Hidalgo County Precinct 3 Commissioner-elect Everardo “Ever” Villarreal, La Joya School board Trustee Alex Cantu and his wife, South Texas College Trustee Victoria “Vicky” Cantu.

“It was a hard race and we gotta work together for the betterment of Agua SUD and give it back to the customers. That’s one thing we can make happen.” Tijerina said.

The November 2020 election marked a new era for the utility district as it was postponed from its original May date due to the COVID-19 pandemic. It was also the first election for the district since board members voted last December to switch from city- and county-based seats to single-member districts.

Last year, the board also approved a five-year plan to gradually increase base rates — the monthly minimum customers pay for water and sewer service — and per-gallon rates. As part of their campaign, Tijerina, Solis and Diaz said they would look into lowering the rates despite a recent audit finding that the new rates contributed to a $500,000 increase in revenue last year.

“We’ll reevaluate the budget to see how we can lower the rates, improve customer service and Esmer and Maribel’s districts,” Tijerina said. “We’ll all work together to get this done.”

As directors for Districts 1, Diaz will represent Palmview, which is the site of the multimillion-dollar sewer and wastewater project. As District 3 director, represents an unincorporated area of land.

“We’re trying to get water to more areas that don’t have access, we need to work together to work diligently to ensure all these projects get done,” Solis said. “And we all have one common goal: to help the customers as much as we can and we hope together, we can do that.”

After the swearing-in ceremony, the board was rearranged. Tijerina was elected to replace President Lloyd Loya, Director Ivan Sandoval will replace Vice President Cesar Rodriguez Jr., Diaz was selected to replace Director Adolfo Arriaga as the board’s new secretary and Solis is now the Agua SUD treasurer, a position that was previously vacant.

“We’re here to help everybody and give back to the community,” Solis said. “With the help of Ivan, Esmer, Homer and the rest of the directors, we will make this better again.”