Sharyland school board trustees said goodbye to one of their own as they swore in a new board member during their Monday meeting.

Criminal investigator Alejandro Rodriguez was sworn into the board after beating incumbent Julio Cerda during the November 3 general election. Rodriguez, who previously ran for the board in 2014, received nearly 56% of the votes. 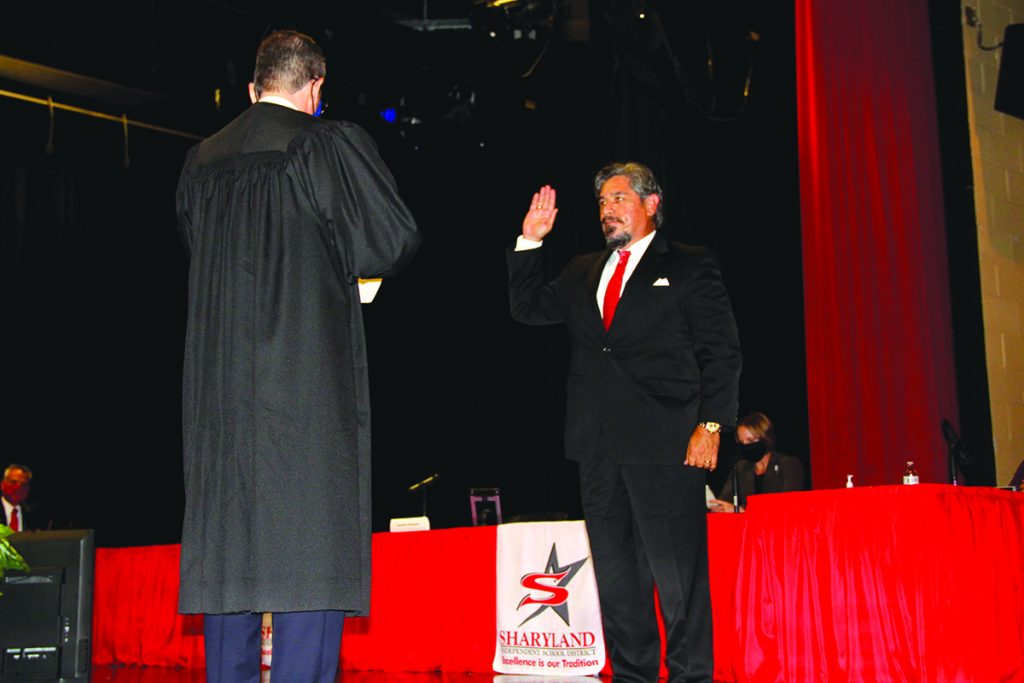 Alejandro Rodriguez at his swearing in ceremony for the Sharyland School board of Trustees Monday, Nov. 16, 2020. Courtesy photos.

After his swearing in, Rodriguez thanked his family for their support during his campaign.

“Since day one we decided that because of certain things we did not approve of , I was going to run, they were 100% behind me and continue to do that,” Rodriguez said. “I’m a man of my word who lives his life with compassion and common sense. This position I am taking doesn’t belong to me, it’s the community’s. I’m here to serve them and not for any special interests or to raise my clout.”

Cerda, who had been on the board since 2014, was recognized for his achievements on the board. The engineer spoke for nearly 20 minutes during the meeting and praised his fellow trustees.

“One of the best places I’ve ever been is here in Sharyland,” Cerda said. “Sharyland is a community of friends and people that love each other. I just wanted to provide my background as a city manager and engineer to the board and I loved it so much. It’ll be the most awesome experience you will ever have Alejandro. There’s nothing like it.”

Certified Public Accountant Ricardo “Ricky” Longoria, who has served on the board since 2008, was also sworn-in to the board during the Monday meeting after winning the majority 45% of the votes during the November election where he faced three other challengers.

“I’ve been fortunate enough to serve on the board for 12 years and look forward to serving an additional three years,” Longoria said. “I am excited to be working with my colleagues as we try to address the uncertain times we are in and educate our kids.”

The board also restructured to fill in a vacancy.

Keith Padilla, who was named president of the board last May, retains his position while Julio Cerda, the previous vice president, is stepping down from his position following his campaign loss. Dr. Noe Oliveira will now serve as vice president and Trustee Jose “Pepe” Garcia will serve as assistant secretary.