After two hard fought home victories in the opening round of the UIL state football playoffs last week both Mission High and Sharyland Pioneer will be on the road for their respective area round contests tonight.

The Eagles (5 – 1) are scheduled to take on the Laredo United South Panthers (4 – 3) at the Bill Johnson Student Activity Center in Laredo. The game is part of the Class 6A Div. I postseason tournament. Kickoff is set for 7 pm. Pioneer (6 – 0) will be in San Antonio to face the Marble Falls Mustangs (7 – 2) in a Class 5A Div. II game at Heroes Stadium in a contest scheduled to start at 7:30 pm. 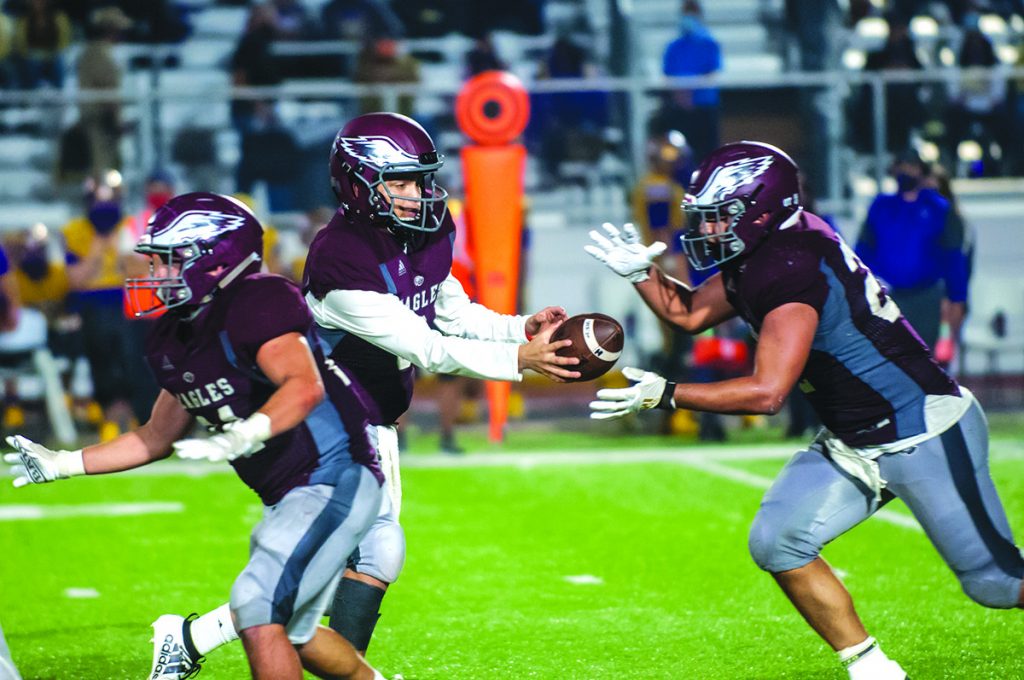 Mission quarterback Jeremy Duran hands the ball off to running back Damian Cortez during the fourth quarter of the Eagles 27-18 playoff game victory over the San Benito Greyhounds Friday, Dec. 11, 2020. Progress Times photo by Luciano Guerra

The last time the Eagles were in the second round was 2009 but they are back thanks to their 27 – 18 win over San Benito last week at Tom Landry Hall of Fame Stadium. It also marked the first playoff victory for Eagles’ head coach Koy Detmer.

The Eagles recorded four short rushing touchdowns, three from quarterback Jeremy Duran and another from running back Andrew Maldonado, to account for their scoring. Mission’s defense, which has been stingy all year in terms of both points and yards, kept the visiting Greyhounds out of the end zone until the fourth quarter.

Detmer was pleased with how his team responded from their only loss of the season (to Edinburg Vela) the previous week and the effort they made in the victory over the Greyhounds. “It was good to see, in the second half; the defense stepping up, getting a stop, and then the offense being able to get a first down and close out the game . . . that’s important, especially this time of year.”

The Panthers, the fourth place team from District 30-6A, advanced to tonight’s game by virtue of a forfeit. Their first round opponent, San Antonio Harlan, was unable to play due to concerns over coronavirus cases. They defeated Laredo LBJ 52 – 0 in their last regular season game of the year to secure their district’s final playoff spot. This year marks the sixth straight year United South has made the post season. Their last area round appearance came in 2016.
The Panthers, led by running back Brian Benavides, put up five games of 20 points or more in the regular season. Their three losses were to the district’s other playoff qualifiers. The teams’ three wins (other than last weeks’) were by 15 points or more. 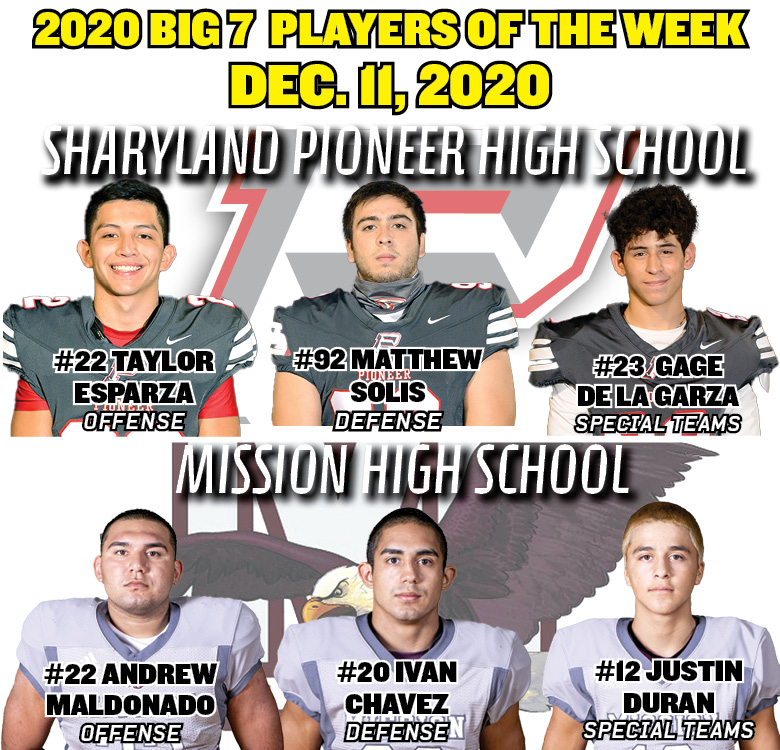 Detmer described the Panthers as a “big, physical team” with experienced seniors. “It’s a playoff game against a very good, well-coached quality team,” said Detmer. “It’s going to take a great effort by our guys to go get it done.”

Detmer feels good about his team as well. “The kids are excited. Obviously, coming off a win and getting the chance to continue on; excited for another opportunity. Things are moving forward and everybody seems fired up for another week.”

Sharyland Pioneer is making their second straight area round appearance under head coach Tom Lee. The Diamondbacks defeated Pflugerville Weiss 28 – 21 in the second round last year. The team overcame a slow start in last weeks’ 42 – 23 victory over Medina Valley at Richard Thompson Stadium to reach tonight’s area round contest.

Against Medina Valley, Pioneer trailed 7 – 0 after the first; but three second quarter touchdowns helped put the Diamondbacks up at the half and two big defensive stops in the third quarter allowed them to gain control of the contest. Quarterback Eddie Lee Marburger threw for two scores and ran for two more. Running back Tristan Castillo recorded two rushing scores as well. Taylor Esparza caught the first of Marburger’s scoring throws and the second, to Joseph Graham Jr., put Marburger in the record books for the most career touchdowns passes (88) in Rio Grande Valley history.

Coach Lee was complimentary of his team’s play after halftime and the way his team overcame a tough opponent. “I thought we played pretty good the second half,” said Lee. “That was when we got some big stops and obviously our offense turned it on in the second half as well. It wasn’t the best game we played this year, but in the playoffs, you know, everyone is going to be better. . . Medina Valley was a good football team.”

Tonight’s opponent is a good football team as well. The Mustangs, the third place team from District 14-5A Div. II, advanced to tonight’s game by defeating Brenham 27 – 24 on a last second field goal last Friday night in their opening round game. It was the team’s first playoff appearance and first postseason victory since 2010. The Mustangs enter tonight’s game on a four game winning streak, having won their last three regular season games by a combined score of 153 -0.

Much like United South, the Mustangs rely on a strong ground game. In last week’s win over Brenham they amassed over 300 yards rushing on 57 attempts; passing the ball only three times. Hayden Hoover was the team’s leading rusher in the victory.

Still, Lee likes what he sees from his own squad. “We’re continuing to get better. This is really week six for us, so every week is a little bit of a new challenge but I think we get better each week as we play.”