Last week, representatives from the Agua Special Utility District and the city of Palmview met to break bread, literally. 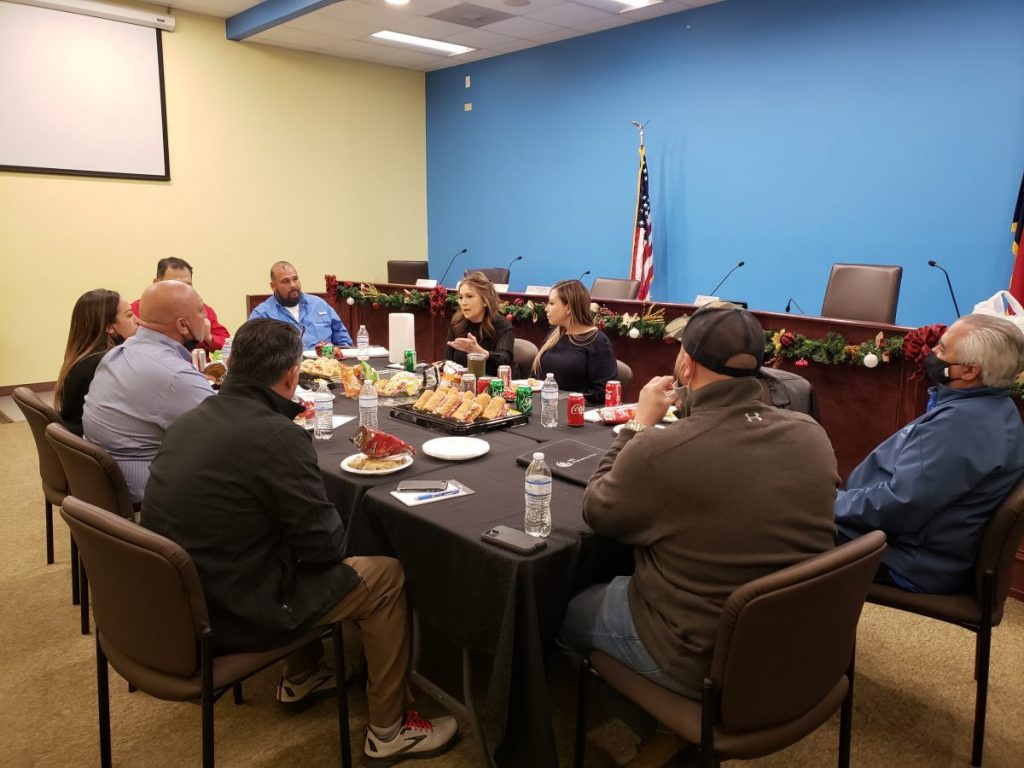 Members of a joint committee for Agua SUD and the city of Palmview meet in an informal workshop at the Agua SUD headquarters Friday, Jan. 29, 2021. Progress Times photo by Jose De Leon III.

The members, joined by Agua SUD Engineer Emigdio “Milo” Salinas and Palmview city Manager Michael Leo and city Planning Director Rudy Flores, made up a joint committee between both entities to keep each other updated on the status of the wastewater project and other projects going on in the city.

Diaz, who is the director of the committee as she represents Palmview on the Agua SUD board, said the meeting was a chance for new members such as her, Solis, and Flores to familiarize themselves with the project that first broke ground in 2017.

“We’re trying to get the project done and follow up on what each of us have and gain new information from each other,” Diaz said. “It’s been very challenging, there’s a lot of information we keep going back to, but we want to complete it. Since this is in my area it’ll be the ratepayers in my district who are mostly affected by this.”

During a Tuesday Palmview city council meeting, Leo noted that the committee had been formed in February 2019 but had not met for a while.

“It was a very positive meeting,” Perez said during the city council meeting. “We realized all they’re doing to get people connected and the issues they’re facing especially on the south side but there’s been little problems popping up that they’ve been fixing even if that wasn’t what they were originally going to do.”

When the project first broke ground, over 1,500 Palmview residents and hundreds of businesses were to have sewer lines connected to the Mission Water Plant. As part of the project, 20 miles worth of streets in the city were dug up by crews contracted by the Agua Special Utility District to lay down sewer lines all over the city.

At first, the project proved to be contentious.

In 2018, the city started building their own sewer system without permission from the utility district to spur commercial development along Expressway 83.

When the utility district complained about the project, Palmview filed a lawsuit. The lawsuit was ultimately dropped, and the committee was originally formed.

“The relationship in Palmview is great, we have the same goal so that’s why we’re working together to make this happen,” Agua Board President Homer Tijerina said, adding that the committee will begin to meet at the end of every month.

The status of the completion date for the sewer project, however, remains up in the air.

In November 2019, Agua SUD fired OG Construction – one of two contractors hired to build the Palmview sewer system – which temporarily delayed the project.

In a statement, Agua SUD stated that their contract with OG Construction was terminated due to several uncorrected deficiencies that made the project fall behind schedule.

Last year, Agua SUD directors approved a takeover agreement with SureTec, OG’s bond company, to take over OG’s duties. OG was responsible for Phase two of the project which would’ve hooked up homes in Palmview’s north east side to the sewer system.

Phase one of the project, which hooks up homes on Palmview’s west side, is already completed, Tijerina said.

“But every week we meet with SureTec and keep asking them the same thing, ‘what’s the status of the project?’” Tijerina said, “We don’t have a finalized completion date for this project because we’re still waiting for SureTec to provide us with one.”

Palmview commissioner Alexandra Flores noted that with the committee being active, residents will have more information on the wastewater project. During her campaign for city commissioner, she ran on a platform of more transparency regarding the project.

“I really felt we were working together to support one another, moving forward this will only be a positive for both entities,” Flores said. “We will collaborate more to make sure we relay information more effectively to constituents to be more effective leaders for them.”