With the girls’ basketball playoffs kicking off next week, this is the week that we would normally be publishing a story featuring the Big 7 teams that had either already clinched playoff berths or that were still in playoff contention. Of the seven teams from the Mission, Sharyland and La Joya school districts that we cover, we usually have at least three or four that would fit into one of these two categories. Unfortunately, that is not the case this year.

That’s because the Pioneer Lady Diamondbacks could very well be the only Big 7 girls’ basketball team to qualify for the playoffs this year. How is this possible? The fact that the Big 7’s three 6-A teams, Mission, La Joya and Juarez Lincoln have compiled records of 8-8, 4-12 and 0-14 respectively through Monday night’s games has resulted in all three being eliminated from playoff contention. 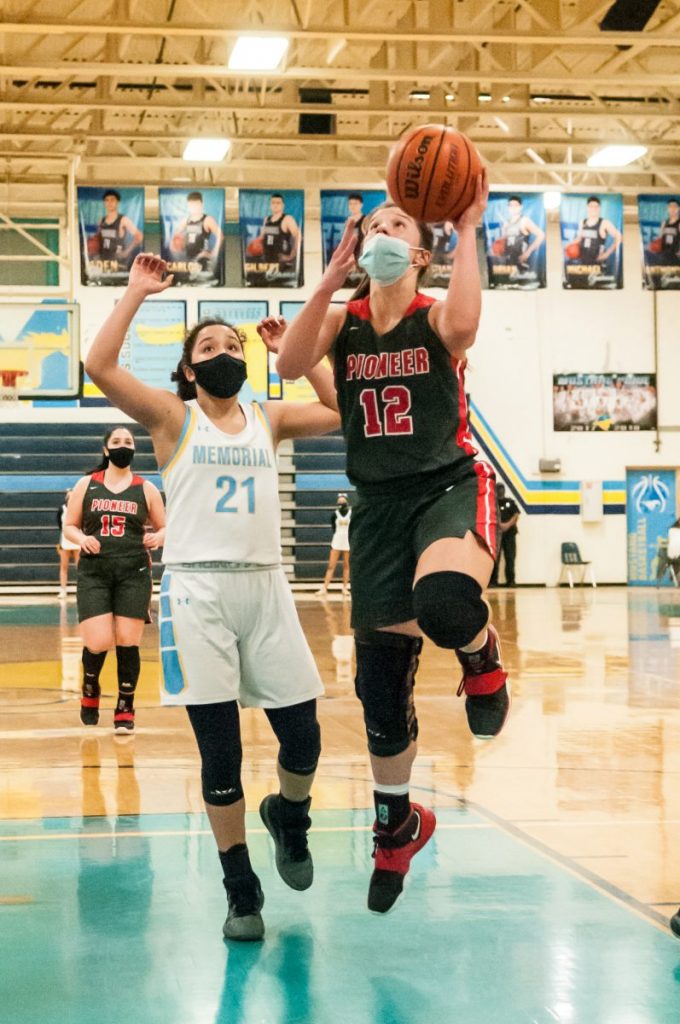 Pioneer’s Audry Hornaday goes in for a lay-up during
the third quarter of the Lady Diamondbacks’ 46-39
win over the McAllen Memorial Lady Mustangs Monday, Feb. 8, 2021. Progress Times photo by Luciano Guerra.

As for the Big 7’s 5-A teams other than Pioneer, Mission Veterans, Sharyland and Palmview, they’ve compiled records of 3-6, 1-8 and 0-8 respectively through Monday night’s games. As a result, the Lady Rattlers and the Lady Lobos have also been eliminated from the playoffs. As for the Lady Patriots, their only chance to qualify for postseason play is to tie Laredo Cigarroa for fourth place by beating them tonight and then defeating the Lady Toros again in a play-in tiebreaker game.

Having as many as five, or possibly even six, Big 7 teams not qualify for the playoffs is the famine. So what is the feast? It’s the Pioneer Lady Diamondbacks.

Through Monday night’s game the Lady Diamondbacks have compiled a perfect 11-0 District 31-5A record. As a result they have already clinched a playoff berth and are on the verge of claiming their third district championship in a row.

That is why we have decided to feature Coach Nicole Villarreal’s Lady Diamondbacks team here this week. And we will be doing so by focusing on her guard combination of senior Audry Hornaday and junior Jordan Bravo; a Dynamic Duo that Villarreal herself credits with being, “…a huge aspect in our successes.”

“They’re definitely a blessing,” Villarreal said about Hornaday and Bravo. “They open up a lot of things for our entire game because it’s not just one person that they (Pioneer’s opponents) can focus on. We’re very blessed to be able to have them. Not only playing at the forward position as well. They allow us to have Carly (Hornaday) coming in and other people rotating in which gives us much more of a team concept.”

Having Hornaday on the court is something that Villarreal is especially grateful for. That’s because she remembers all too well what it’s like not to be able to put her into the lineup. That’s what Villarreal went through last year as Hornaday had to sit out the entire 2020 season due to an injury.

“I tore my ACL in the beginning of my junior season,” Hornaday said. “It was very deflating. But I was very privileged to have a great team, great coaches and a great supporting staff to help me. My outside coaches helped me tremendously. I give all the credit for what I’m doing this year to my teammates and my coaches.”

The fact that Hornaday was named the district MVP in 2018-2019 is a very good indicator of what kind of a season she had as a sophomore and how much she was missed last year. But as hard as it was for Villarreal and her girls to not have her on the court, it was even harder for Hornaday to not be able to do any more than call plays and cheer her teammates on from the bench.

“It was very heartbreaking,” Hornaday said. “But it was satisfying to see my teammates have so much fun and to see the joy in their faces. I don’t think I would’ve been able to get through it alone but just watching them really helped me push through.”

While this is the final week of district play, the Lady Diamondbacks are having to make up games they had to postpone earlier in the season due to COVID protocol. As a result, they played two games this past Saturday, and are in the process of playing four games this week.

When asked how she thinks playing six games within a week just before the playoffs start will affect her team, Hornaday said, “I think we’re just looking to bounce back either way. Of course being in quarantine can set a team back, but even through those circumstances we continued to work out; even if it was online, or finding a park or even a street and working out.”

As the elder of the Lady Diamondbacks’ Dynamic Duo, Hornaday is as grateful to have Bravo as her partner as Batman was to have Robin.

“She (Bravo) makes everything so much easier,” Hornaday said. “She’s such a great player. She deserves so much credit for everything she’s done. I’ve seen her put in countless hours and it’s really paying off for her.”

“It’s a lot much easier to have her back on the team because she’s really what makes our offense go,” Bravo said about Hornaday. “She knows what’s open, when to pass the ball and whomever is open.”

The Lady Diamondbacks are on the verge of claiming their third district title in as many years. When asked what doing so would mean to her, Bravo said, “It would mean a lot because we’re really underestimated down here. When other teams play us it’s like, ‘It’s just Pioneer.’ But I think that winning a third district championship will get us recognized more.”

While the Lady Diamondbacks have had much success against district opponents the past two seasons, they have fallen a bit short once they’ve reached the playoffs. Two years ago they lost to Brownsville Pace in the bi-district round of the playoffs while last year they lost to Corpus Christi Veteran Memorial in the area round. So what goals have they set for postseason play this year?

“We’re trying to get past round two and past round three this year,” Bravo said. “We just want to keep going as far as we can.”