What a difference a year makes. The 2019–2020 Mission Veterans Lady Patriots soccer team was 1 – 5 after six games in District 31–5A before winning five of their last eight to garner a playoff spot. This year’s squad is taking a different route.

The team’s 5–0 victory over Roma this past Tuesday kept them on top of the 2020–2021 District 30–5A standings with a perfect 6–0 record. It was the team’s second win of the week and their third in the span of five days. The Lady Patriots are 10–0–2 for the season and ranked 17th in the state in Class 5A in the most recent poll put out by the Texas Girls Coaches Association; the second highest ranked 5A team in the Valley below the 4th ranked McAllen High (McHi) Lady Bulldogs. 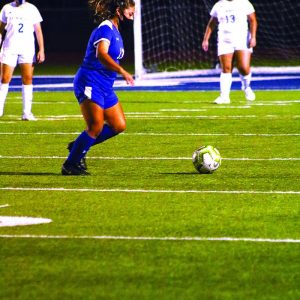 Most of the team’s players from last season are back this year and, according to head coach Kenan Nunez, they’re showing a better understanding of the game. “The good thing is that last year, we were young. I had a bunch of freshmen out there literally just running around. This past year they have improved their level and now we see like a lot of soccer being played.”

Nunez credited much of the teams’ current success to midfield players like Zarahy Campos and Mia Sanchez who have done a good job controlling possession and to players like Tara Madrid and Aliyah Pelayo who put pressure on opposing defenses with their speed and endless energy chasing down balls delivered to them by the likes of Campos and Sanchez. “They (Madrid and Pelayo) tire defenses out by just their runs. It’s only a matter of time that they break them down.”

Nunez said he has challenged his team this year to get ahead early and in his words, “decide the game before the (first) half is over.” Nunez says he puts pressure on his starters to score goals. “If you (the starters) score goals you’re happy; if you’re happy the bench becomes happy because we all get to play.”

The team’s match-up last Friday afternoon at home against La Joya Palmview was a good example of how everything has been going right for the team this year as the Lady Patriots used a flurry of early goals en route to a 7–0 win over the Lady Lobos. Veterans scored four times in the first 20 minutes of the game and twice more before the half to effectively decide the outcome. Sanchez opened the scoring with an “Olympic goal”, a term used to describe a goal scored directly by a player from a corner kick without any contact from another player. It was 2–0 after Pelayo headed in another corner kick from Sanchez a short time later. Campos scored twice in the first half while Madrid and Gabrielle Longoria each added one. Alex Luna scored the final goal of the game late in the second half.

The Lady Patriots have four district games left and if Coach Nunez has any say in the matter they will win them all. “Our goal is to get out of here (district) undefeated and leave our mark.” Nunez, who took over the program four years ago and helped bring it to this point, also knows it will take the whole team to keep things moving in the right direction. “It’s been a gradual process but we’re up there now. Now it’s up to us to maintain that high level of play.”

Veterans, who plays host to Laredo Martin tonight on the campus of Veterans High School in a game scheduled to kick-off off at 6:30 pm, will be finishing out their district schedule with three games next week. 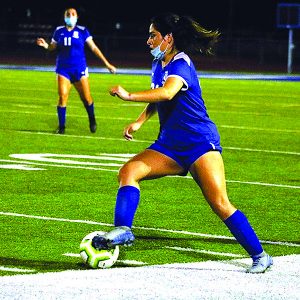 The loss to Veterans dropped Palmview to 1–2 in district play but the team rebounded with a 5-0 win over Rio Grande City this past Tuesday to even out their district record at 2–2 with six games left. That includes one this past Wednesday (result not available by deadline), another tonight in Laredo against Cigarroa High and a home game tomorrow afternoon (2 pm) against Laredo Martin.

The two girls’ squads from Sharyland ISD, both of whom are regulars in the post season, each find themselves battling to be a part of the top four in a reconfigured District 31 – 5A as the season nears the halfway point.

The Lady Rattlers from Sharyland High were the district champs last year, having just edged out the Lady Diamondbacks from Pioneer High for the title. The addition of the three McAllen schools into the district has altered the landscape of the district over previous years, especially the presence of McHi, a perennial power from Class 6A.

The Lady Rattlers only loss this season came at the hands of  McHi, the current district leader,   a few weeks ago but the team has kept pace since then including a hard fought 1–0 victory over McAllen Rowe this past Monday night at Richard Thompson Stadium in Mission. The win improved the Lady Rattlers to 6–1 in district play and 11–1 overall.  A late goal from Anacecilia Pena was the difference maker for the Lady Rattlers, who will get a rematch with McHi next Friday to see if they can be part of another district title. The team had scheduled match-ups this past Wednesday and Thursday night (results not available by deadline) and travels to PSJA Southwest tonight. The team also plays Pioneer next Monday.

Speaking of Pioneer, the Lady Diamondbacks stayed in the hunt for a playoff spot with a 2–0 win over Valley View on Monday night. The win improved the squad’s district record to 4–3. Last Saturday morning the team gave McHi everything they could handle in a 4–1 loss at Pioneer High School. The game was tied 1–1 at the half, and the Lady Diamondbacks only trailed by one with under 10 minutes to play in the contest. Abby Martinez scored the team’s lone goal.  Pioneer plays host to McAllen Rowe tonight at Pioneer High School in a game scheduled to kick off at 6:30 pm.

With so many games on the schedule this past week and the high number that are scheduled both for this weekend and into Monday, the girls 5A playoff picture should be much clearer by this time next week.