Sharyland ISD presented their special called board meeting on Monday evening and said a bittersweet goodbye to one of their beloved coaches. 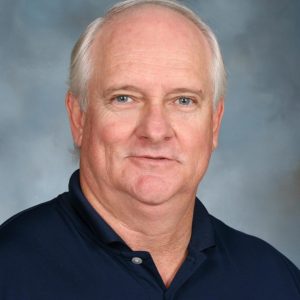 “When you put kids always first, you never lose,” Thompson said at the board meeting. “That’s what I found out a long time ago when I got into this business. And I wanted to get into this business because I wanted to make a positive difference in young peoples’ lives. And if you don’t have that kind of heart, then don’t get into coaching.”
Thompson has been with Sharyland ISD for over 40 years, recounting how he started working for the district and what made him stay and coach for as long as he did.

“I was born and raised in Mission,” Thompson said. “And when I graduated from Baylor [University], I told my wife we’d probably go back up to Central Texas. We’ll make our way back up here. And we never did because I was at the best school, so why should I move on?” 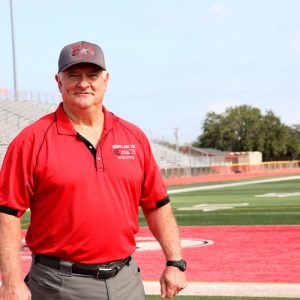 “When you have administration or school boards like we have, that’s all one team,” Thompson said. “And I think I’ve stressed that through the years. Our principals have been very supportive. I can’t think of one principal that’s not supportive of athletics. Because they see the value that it has in the overall educational process.”
Coach Ron Adame was named as the new athletic director with football head coach Thomas Lee as the new assistant athletic director.
“It’s going to be tough not having Coach Thompson around on a day-to-day basis,” Adame said. “There’s a big part of me that does not want to see him leave; the selfish part of me. But at the same time, this gentleman has provided so many years of service to the students of this school district and the administration and he deserves to enjoy his retirement.”
Adame has been coaching football at Sharyland ISD for over 25 years.
“I’ve poured my heart and soul into the students of this school district and I am going to continue doing this and I just want to thank you for this opportunity that I’ve been given,” Adame said. “And we’re expecting and hoping for continued leadership in our athletic department.”
Coach Thomas Lee started with Sharyland I.S.D in 1994 and has served as the head football coach and athletic coordinator at Sharyland Pioneer High School since 2018. 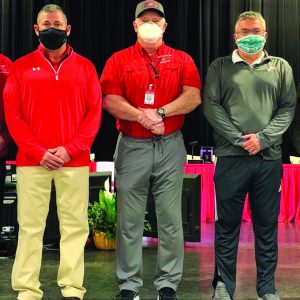 “We’re going to lean on each other for the strengths that we have, and we’re also going to lean on Coach Thompson,” Lee said. “He may be retired, but, we’ll be calling him for a lot of advice and to make sure that we’re still doing the things that we want to do in Sharyland ISD and our athletic programs.”

“I’ve been in this district for 20 years. I took time where I stepped away and got some great experience where I was at. I’ve loved the last three years coaching football at Sharyland Pioneer, and we’re excited to be able and take what we’ve gotten from Coach Thompson and put our own little stamp on it and continue the success that we’ve had,” Lee said.
Sharyland ISD superintendent Maria Vidaurri was overcome with emotion as she explained that they felt Coach Thompson’s presence within Adame and Lee as they interviewed for their new positions.
“As an educator, those times come up every so often when you feel it all at one time, and in one place,” Vidaurri said. “That’s what we felt in those interviews. I want to thank you for everything that you have taught us as leaders in this district, not just in the athletic program.”
“They’ve always been loyal and they come back to what Sharyland ISD is all about,” Thompson said of Adame and Lee.