With construction on the La Joya bypass about halfway complete, the city of Peñitas is preparing for growth.
Officially called the “U.S. 83 Relief Route,” the project will extend Interstate 2 from Palmview to Sullivan City.

“The U.S. 83 Relief Route project will extend Interstate 2 from Palmview to the east side of Sullivan City. Map courtesy of the Texas Department of Transportation.”

“We’re excited about it, especially because we’re going to have two exit lanes, one on Liberty and one on Tom Gill, so we’re expecting a lot of the traffic to get off here,” said Peñitas Mayor Rodrigo “Rigo” Lopez. “We’re not going to be one of those cities that gets left behind.” 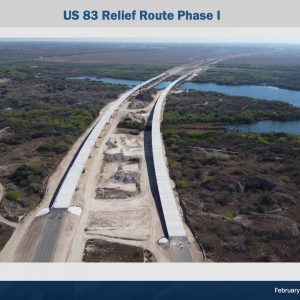 Construction on Phase I of the project, which connects the east side of Sullivan City to Jara Chinas Road, is about 63% complete, according to information provided by the Texas Department of Transportation.

Along with the highway and frontage roads, Phase I involved the construction of a bridge over La Joya Lake. 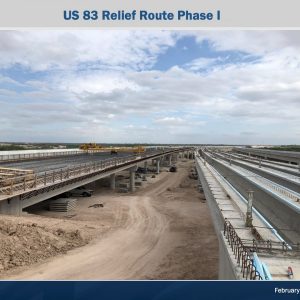 Anderson Columbia, a construction company based in Lake City, Florida, is scheduled to finish Phase I by February 2022.
Construction on Phase II of the project, which connects Jara Chinas Road to Interstate 2 near Showers Road, is about 47% complete, according to information provided by the Department of Transportation.

Phase II also involved drainage work, which is more than 90% complete.
Pulice Construction — a subsidiary of Dragados, a Spanish construction conglomerate — is scheduled to finish Phase II by May 2023.
Phase I and Phase II cost about $183 million, according to information provided by the Department of Transportation. When completed, the project will extend Interstate 2 by about 9 miles.
The new highway will allow motorists to avoid U.S. 83 between Sullivan City and Palmview, which is prone to congestion during rush hour.
Planning for the project started more than a decade ago. Peñitas worked closely with the Rio Grande Valley Metropolitan Planning Organization and the Department of Transportation throughout the process.

“We’ve been talking about it for several years now and it’s finally here,” Lopez said. “We’re going to be able to see this come to fruition.”
Exits on Liberty Road and Tom Gill Road will position the city of Peñitas for commercial development, Lopez said, adding that about 500 acres of undeveloped land is ready for new businesses.
“We’re looking to attract maybe your franchise, sit-down restaurants and maybe some hotels and stuff of that nature,” Lopez said.
The city is working to market Peñitas to hotels, restaurants and big-box retailers.
“Anything in particular, I wouldn’t want to mention because of the competition that surrounds these types of things,” Lopez said.
Reducing the travel time between Peñitas and McAllen will also position the city for residential growth.
“You can get on the expressway here in Peñitas and be in central McAllen at the same time as if you live on Trenton and drove down Second and got to central McAllen,” said Peñitas City Manager Omar Romero.

More rooftops and retail development will boost tax revenue, allowing Peñitas to expand city services.
“We’re looking forward to it,” Romero said. “And we think that the growth for the city is going to be tremendous after it.”