When a police officer with a checkered past asked him for a job, La Grulla police Chief Desi Olivarez weighed his options.

Heriberto “Eddie” Sanchez, 46, of Mission had resigned from the Hidalgo County Sheriff’s Office in 2016 after being accused of sexual harassment. Another complaint against Sanchez had surfaced in 2019, when he worked for the Alton Police Department.

Sanchez, however, had a reputation for working hard. Former coworkers spoke highly of him. And he denied the sexual harassment allegations.

“The decision was made to give him a second chance,” Olivarez said. “And to monitor him closely.” 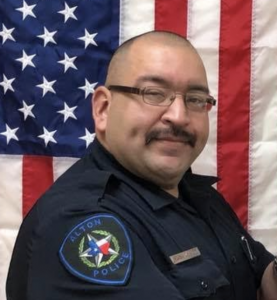 While he conducted a background check and knew about the sexual harassment allegations, Olivarez said neither the Sheriff’s Office nor Alton provided him with their internal affairs investigations.

“I don’t know whether they’re true,” Olivarez said. “I can tell you that he’s done a good job here. He’s done an outstanding job here so far. He’s got a great attitude and his performance is exemplary.”

Sanchez started his law enforcement career at the Sheriff’s Office, where he worked as a jailer in the 1990s, according to Commission on Law Enforcement records. He left for the Hidalgo Police Department in 2004.

Nine years later, Sanchez returned to the Sheriff’s Office. He received a promotion from deputy to investigator and worked several off-duty security jobs.

His career ended abruptly in 2016, when a female deputy accused Sanchez of making “unwelcome sexual advances,” according to documents released under the Texas Public Information Act. She filed a complaint after Sanchez grabbed her hand and “placed it over his crotch” at work.

Sanchez confirmed her story, but he denied making any unwelcome sexual advances, according to an affidavit he submitted during the internal investigation. Sanchez said he actually had a relationship with the female deputy.

In a follow-up interview, the female deputy admitted to sending a photo of herself wearing a “see-through shirt” to Sanchez, according to a summary of the internal investigation. The female deputy said she “had completely forgotten about the photo and the messages.”

Sanchez resigned before the Sheriff’s Office finished the internal investigation.

“I resigned to avoid all the crap — the back-and-forth,” Sanchez said.

“He’s a professional. This wasn’t an unfortunate incident. I would venture to say that it’s an isolated incident,” Flores said in a May 2018 interview. “It’s something that was outside of his normal character.”

In 2019, though, another woman accused Sanchez of sexual harassment.

The woman had been arrested on suspicion of driving while intoxicated. Sanchez transported her to the county jail.

On the way, Sanchez asked the woman for her phone number. He started to call and text the woman after she was released from jail.

“At one point he mentioned he would get her charges dismissed if she would answer his calls,” according to the internal investigation. “He mentioned that he had friends that were Judges and that he could help her get into a program.”

The woman felt uncomfortable and filed a complaint against him.

Sanchez denied the allegations. He was never charged with any crime.

“It didn’t happen. I know where it came from, as to who told her to say that because she wanted the DWI case dismissed. I don’t know any judges to take care of cases like that. I didn’t tell her that,” Sanchez said. “But yet a woman cries wolf and everybody runs to her help. And because of the incident from the Sheriff’s Office, it’s more believable.”

Sanchez said he didn’t do anything wrong and felt unfairly targeted.

“The way I see it is: I know that other officers have done bad things or worse things, yet nobody seems to end up on newspapers except me,” Sanchez said. “Is there a reason for that?”

After driving trucks and working for a construction materials company, Sanchez applied for a job in La Grulla.

The police department, which struggles to find qualified applicants, had been on the brink of cutting a shift when Sanchez applied.

“So I told him: ‘Anything that we see that is inappropriate — one call — and I’m not going to tolerate any of these things that have been brought up,’” Olivarez said. “But I need to cover the city.”