City Commissioner Javier Villalobos won 51% of the vote during the mayoral runoff election — and defeated City Commissioner Veronica Vela Whitacre by just 206 votes, according to results announced by the City Secretary’s Office on Saturday night.

“It was a tight one, so I congratulate my opponent,” Villalobos said. “It was a very well run campaign. But we’re very glad and fortunate that we prevailed.”

Villalobos held a victory party at his law office on North 23rd Street, where he thanked supporters and posed for dozens of photos. 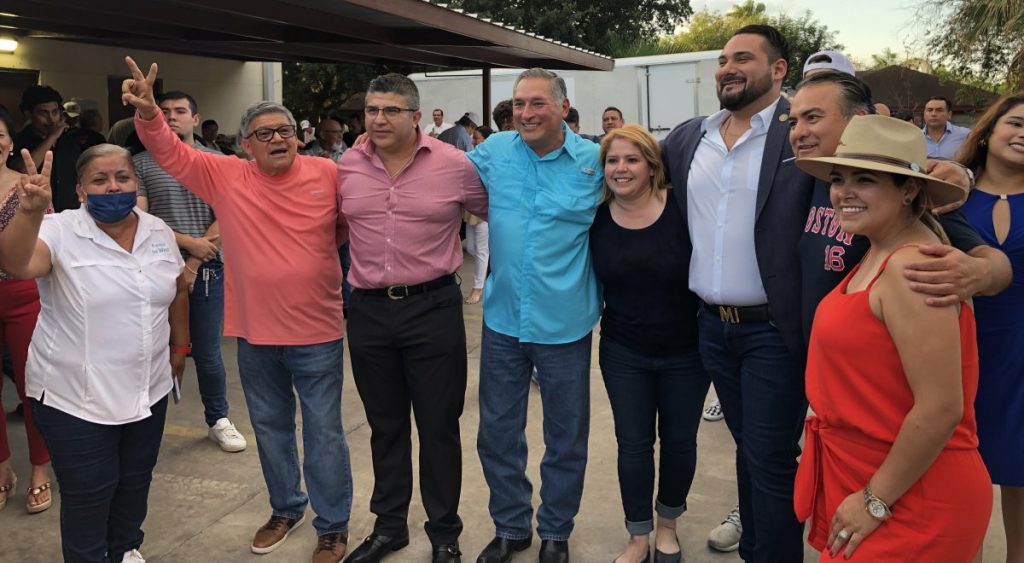 Javier Villalobos, center in the blue shirt, posed for photos with supporters, including City Commissioner Tania Ramirez, at far right, on Saturday night in McAllen. (Photo by Dave Hendricks / The Progress Times.)

Vela Whitacre couldn’t immediately be reached for comment after the polls closed.

All results will remain preliminary until canvassed by the City Commission, which plans to meet on June 14.

The mayoral campaign started in 2020, when Mayor Jim Darling said he wouldn’t run for re-election.

Villalobos and Vela Whitacre announced they would run for mayor. They were joined by businessman Michael Fallek, Dr. Shahid Rashid and Othal E. Brand Jr., the son of former Mayor Othal Brand Sr.

The five-way campaign brought more than 10,000 people to the polls in May.

None of the candidates received a majority of the vote, which sent Villalobos and Vela Whitacre to a runoff.

He served as chairman of the Hidalgo County GOP, provided legal advice to local governments and mounted an unsuccessful campaign for McAllen City Commission in 2015.

Villalobos tried again in 2018, when he won a special election to replace City Commissioner Richard F. Cortez, who resigned to run for county judge.

During his mayoral campaign, Villalobos emphasized his experience in local government.

“I ask that you make your choice based on experience and qualifications, not on friendships or acquaintances,” Villalobos wrote in a mailer sent to voters in May. “We must vote wisely.”

Vela Whitacre, 62, also campaigned on her experience, touting her decades of volunteer work and eight years on the City Commission.

Before she joined the City Commission in 2013, Vela Whitacre served on the boards of several civic organizations, including the McAllen Boys and Girls Club and the International Museum of Art & Science.

Vela Whitacre emphasized her deep roots in McAllen, where the Vela family is an integral part of the community.

“My family roots in the RGV stem back over 200 years in ranching, agriculture, and business,” according to her campaign biography. “For over seventy years, my family has worked in education, governmental civic leadership positions, and as prominent business owners who helped shape the McAllen economy.”

In the runoff, Vela Whitacre sent out a mailer that noted Villalobos wasn’t born in McAllen.

“Villalobos is NOT a McAllen native,” according to the mailer. “Villalobos has made millions representing cities other than McAllen; he is NOT EXCLUSIVE to McAllen.”

The attack on Villalobos — who grew up in Crystal City and moved to the Rio Grande Valley after graduating from law school — didn’t appear to make a difference.

Aguirre won nearly 58% of the vote during the runoff election, according to preliminary results announced by the City Secretary’s Office.

Quintanilla won 62% of the vote during the runoff election, according to preliminary results announced by the City Secretary’s Office.

Cabeza de Vaca won nearly 56% of the vote during the runoff election, according to preliminary results announced by the City Secretary’s Office.