The U.S. Department of Homeland Security Office of Inspector General arrested a U.S. Border Patrol agent Friday after conducting a sting operation at the Falfurrias checkpoint.

Border Patrol Agent Oberlin Cortez Peña Jr., 22, of La Joya told an informant how to trick drug-sniffing dogs and hide cocaine, according to the criminal complaint against him. In exchange, the informant provided Peña with cash.

“When my father was 22 he was a grown, grown man,” said attorney Rick Salinas of Mission, who represents Peña. “Now it’s taking young people longer to mature.”

Salinas said he was struck by how much responsibility Peña had been handed at such a young age.

“He’s a young guy,” Salinas said. “Almost too young to be an agent.” 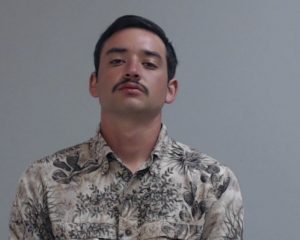 Peña attended Jimmy Carter Early College High School in La Joya. After graduation, he joined the Border Patrol and was assigned to the Falfurrias Station.

In March, the Alamo Police Department arrested Peña on a drunken driving charge. Salinas represented him.

“He comes from a very good family. You can’t really blame the family,” Salinas said. “His father’s always been a doting dad.”

When a federal prosecutor called him about the drug trafficking charge, Salinas said he was stunned.

“When I got told that he was there, I was shocked,” Salinas said, adding later: “I didn’t see anything in him that led me to believe he was engaged in this behavior.”

The investigation started in mid-June, when the Office of Inspector General received “debriefing intelligence” that a Border Patrol agent was involved in human smuggling, according to the criminal complaint. Agents set up a sting operation.

A week later, agents had an informant contact Peña. In exchange for $500, he agreed to provide the informant with advice.

“PENA, a U.S. Border Patrol Agent (BPA), said he would drive ahead on his way to work and communicate which checkpoint lane to smuggle the IA through,” according to the criminal complaint, which described the person being smuggled through the checkpoint as an IA — an illegal alien. “PENA provided detailed instruction on when the smuggling had a highest rate of success, and instructions on how to conceal the IA.”

The next day, Peña met the informant at La Plaza Mall in McAllen.

The informant told Peña he needed to transport 5 kilograms of cocaine through the checkpoint. Peña said he would check the Border Patrol schedule to find out when “rookie agents” would be working.

“PENA recommended to the cooperator the best places to hide narcotics in a motor vehicle and some tactics to distract the USBP canine work dog (K9),” according to the criminal complaint. “PENA told the cooperator to relay what type of compartment the cocaine would be in and the license plates to the load vehicle so that he may check the plates for any alerts.”

During follow-up conversations, the informant sent Peña a photo of a Magellan Outdoors backpack cooler where he planned to hide the cocaine.

“PENA advised to conceal the cocaine inside the walls of the cooler with the insulation,” according to the criminal complaint. “PENA later said that he checked the USBP schedule and that the BPAs working were good. PENA suggested moving the smuggling to Monday, June 28, 2021, because the team (BPAs) sucks and that the BPAs are all rookies.”

After the cocaine passed through the checkpoint, the informant met Peña at the Whataburger in La Joya and paid him $1,000.

They coordinated another cocaine shipment on Friday.

Peña agreed to check the Border Patrol schedule, conduct surveillance and find out if the vehicle’s license plate had been flagged.

After the cocaine passed through the checkpoint, Peña met the informant at the Pilot gas station in Falfurrias. The informant paid him $1,000, according to the criminal complaint.

Agents with the Office of Inspector General and the U.S. Customs and Border Protection Office of Professional Responsibility arrested Peña when he returned to work.

Peña is charged with attempting to aid and abet possession with intent to distribute 5 or more kilograms of cocaine. He appeared before U.S. Magistrate Judge Nadia S. Medrano by videoconference on Monday morning.

Wearing an orange jail uniform and blue surgical mask, Peña said he understood the charge against him.

Medrano scheduled a preliminary examination and detention hearing for Thursday afternoon, when she may set bond.

If convicted, Peña faces 10 years to life in federal prison.