Hidalgo County Judge Richard F. Cortez met with mayors and police chiefs Wednesday at La Joya City Hall, where they discussed how to handle the large number of migrants being released by Border Patrol.

“It’s very obvious that this issue, the immigration issue, has escalated to a level that, simply, we cannot manage,” Cortez said. 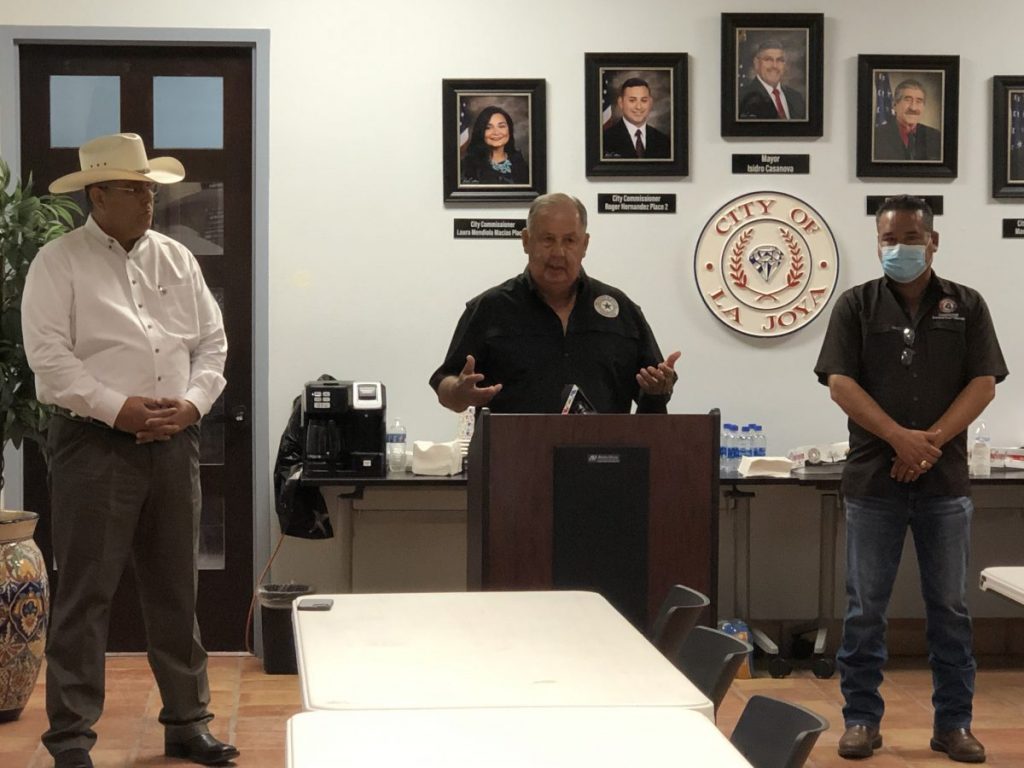 U.S. Border Patrol agents in the Rio Grande Valley Sector apprehended more than 59,000 people in June, according to data published by U.S. Customs and Border Protection, more than 10 times the number apprehended in June 2020.

The situation made national news on Monday when a woman called the La Joya Police Department about migrants at the local Whataburger.

“The citizen explained to the Officer that she had observed a family group who were not being observant of proper health guidelines,” according to a Facebook post by the police department, which quickly went viral. “She stated that the family was coughing and sneezing without covering their mouths and were not wearing face masks.”

Asked on Wednesday morning, La Joya police Sgt. Manuel Casas said he didn’t know the name of the officer who handled the call.

“The Officer approached the family and was told by them that they had been apprehended by Border Patrol days prior and were released because they were sick with Covid-19,” according to the Facebook post.

During the conversation, members of the family said they were staying at the Texas Inn Hotel on U.S. 83.

Casanova said neither Border Patrol nor Catholic Charities of the Rio Grande Valley had informed the city that migrants with COVID-19 would be quarantined at the Texas Inn.

“We just want to make sure that everybody’s safe,” Casanova said. “That’s what it’s all about.”

Border Patrol didn’t respond to a request for comment. Sister Norma Pimentel, the executive director of Catholic Charities, released a statement on Thursday.

“The La Joya incident is an isolated case, in a new location we had just begun to use. This one incident has caused a great deal of misinformation and unfortunately serious consequences that threaten our community with catastrophic outcomes if we can’t continue to isolate and care for the families,” Pimentel said in the statement. “My hope is that we do the right thing to keep our communities safe by supporting efforts that are in place to keep COVID positive families in isolation with the care they need. Together we can protect and make our community safe while also treating our guests who need our care with dignity and respect.”

Casanova discussed the situation with Texas Gov. Greg Abbott on Tuesday. Following the phone call, Abbott signed an executive order that prohibits anyone other than law enforcement officials from providing ground transportation to groups of migrants.

“The dramatic rise in unlawful border crossings has also led to a dramatic rise in COVID-19 cases among unlawful migrants who have made their way into our state, and we must do more to protect Texans from this virus and reduce the burden on our communities,” Abbott said in a statement. “This Executive Order will reduce the risk of COVID-19 exposure in our communities.”

Ultimately, though, only the federal government can fix the problem.

“We have called our congressmen. We’ve tried to reach out to Washington to change the policy, to stop this flow,” Cortez said. “We’ve had no success in doing that.”

Hidalgo County is also concerned about migrants infected with COVID-19 being released into the community.

“And we know, statistically, so far the best number, the best estimate, we have is about 8.3% of those immigrants that are coming by are testing positive for COVID,” Cortez said. “That’s a pretty high number.”

They discussed both short-term and long-term solutions, Cortez said, adding that he may hold a follow-up meeting with cities and school districts from across Hidalgo County.

“We want to stress to our federal elected representatives that they need to make some kind of policy change,” Guerra said.

This story was updated on Thursday, July 29, with a statement from Catholic Charities of the Rio Grande Valley.