Guerra pleaded guilty to conspiracy to possess with intent to distribute more than 2,200 pounds of marijuana. As part of the plea agreement, prosecutors dropped a gun charge against him and recommended 10 years in prison.

“I do accept my responsibility, your honor,” Guerra said.

The case brought together Homeland Security Investigations, which is part of U.S. Immigration and Customs Enforcement; the U.S. Bureau of Alcohol, Tobacco, Firearms and Explosives; and the Criminal Investigations Division of the Texas Department of Public Safety.

They identified more than 70 people affiliated with the Texas Chicano Brotherhood.

“The McAllen investigation revealed that Ricardo GARCIA, Rafael DIAZ, and Hector GUERRA were ranking members within the Starr County faction of the TxCB organization,” according to a summary of the case against Guerra filed by federal prosecutors. “These ranking members thus became targets of an electronic surveillance (wiretap) investigation.”

The Gulf Cartel paid members of the Texas Chicano Brotherhood to transport marijuana throughout the Rio Grande Valley, according to federal court records. The gang also robbed stash houses and sold the stolen marijuana to other smugglers.

Guerra and other members of the gang moved about 330 pounds of marijuana a week, according to information provided to the government by an informant. The gang also participated in kidnappings and murders.

After a grand jury indicted Guerra, agents tracked him to a trailer home in La Rosita. A regional SWAT team from San Juan ripped off the door with a battering ram, set off two stun grenades and arrested him on Nov. 21, 2018.

“And that is how the SWAT team in San Juan knocks on the door,” said Bill Weir, the host of a short-lived television show called “Border Live,” which filmed the arrest. Weir said agents had both a federal arrest warrant and a search warrant.

The search warrant had been written by Arturo David Ibarra Jr., an investigator with the Starr County District Attorney’s Office.

Ibarra told a judge that investigators believed Guerra was an “enforcer” in the Texas Chicano Brotherhood.

Ibarra requested a no-knock warrant based on information provided by an informant.

“During the investigation Investigator Ibarra learned that the suspected party attended a Texas Chicano Brotherhood meeting on November 18, 2018 and the suspected party was in the possession of a AK-47 and a handgun,” read the affidavit, according to federal court records.

When agents searched the trailer, they didn’t find an AK-47. They did, however, find a pistol hidden in an air-conditioning vent.

Information about a months-old marijuana bust simply wasn’t enough to justify a search, Hatley argued in a motion to suppress. The warrant also failed to include any information that linked the marijuana bust to Guerra’s house.

Statements that Guerra made after his arrest should be suppressed too, Hatley argued, because a federal agent questioned Guerra after he invoked his right to remain silent. 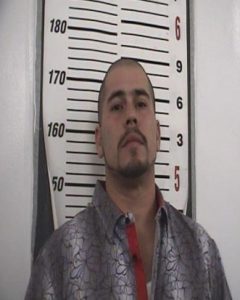 Hector Guerra, 41, of La Rosita was a “ranking member” of the Texas Chicano Brotherhood. (Photo courtesy of the Starr County Sheriff’s Office.)

“The Court finds that the search warrant was not supported by probable cause and that the good-faith exception to the exclusionary rule does not apply,” Rainey wrote in an opinion filed in February. “The search of Defendant’s home after the initial protective sweep incident to his arrest therefore violated his Fourth Amendment rights.”

Rainey also suppressed all statements Guerra made to agents.

“There is no question Defendant explicitly invoked his right to remain silent. Under Miranda and its progeny, the agents should have immediately terminated the interrogation at that point,” Rainey wrote. “Instead of ensuring that Defendant’s right to remain silent was ‘scrupulously honored,’ they continued, in the Government’s own words, ‘trying to encourage him to cooperate with the government.’”

The Texas Chicano Brotherhood “green-lighted” Guerra after his arrest, according to a transcript of a court hearing in August 2020. Concerned about his safety, the U.S. Marshals Service kept Guerra in solitary confinement and transferred him at least three times.

Guerra agreed to plead guilty in May.

“We made the deal for 120 months, your honor,” said Assistant U.S. Attorney Patricia Hubert Booth, who prosecuted the case.

Guerra said he wanted to take classes in prison and become a different person.

“The first few times you came into this court, that wasn’t your attitude,” Rainey said.