“What troubles me about this situation is the Disaster Act is intended to keep the citizens of our state safe,” Soifer said. “And, in this particular case, the governor’s order — GA-38 — is not imposing a requirement that will make people safer, it is prohibiting a requirement that the schools and the local authorities and the people who, generally, Texas relies on to make decisions for its citizens, think are necessary. And so that’s what troubles me.”

A coalition of Rio Grande Valley school districts sued the governor and requested the restraining order Thursday afternoon. During a hearing on Friday, they were joined by Harris County and individual parents from Travis County.

The school districts challenged an executive order Abbott signed in May, which prevented them from requiring students and teachers to wear masks.

The executive order directly conflicted with recommendations from the U.S. Centers for Disease Control and Prevention.

“CDC recommends universal indoor masking for all teachers, staff, students, and visitors to schools, regardless of vaccination status,” according to an update posted by the CDC on July 27. 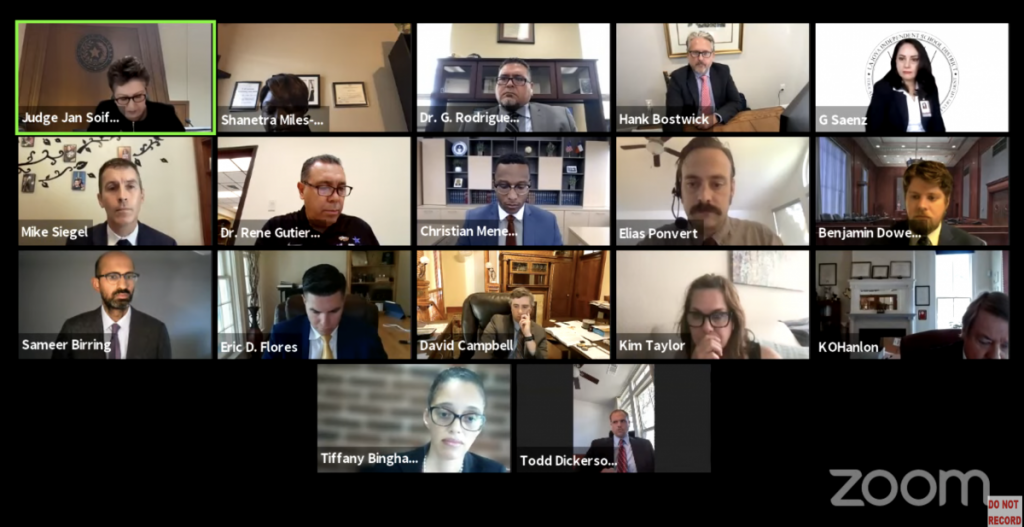 “This is an odd situation that we find ourselves in as a state and, certainly, as school districts,” Campbell said. “As Mr. O’Hanlon has said to me, it’s odd that we have the governor using emergency powers under a disaster act to essentially prevent school districts from responding to a disaster.”

The school districts want to bring students back to campus safety, Campbell said, and minimize the risks posed by COVID-19.

“If school districts in Texas are going to be able to provide safe, in-person classroom instruction, the ability to impose masking mandates when it’s appropriate in those communities is of paramount importance,” Campbell said.

“One thing that’s, I think, been lost in this debate is that GA-38 does not prohibit people from wearing masks,” said Benjamin Dower, a lawyer with the Attorney General’s Office.

As a government employee himself, Dower said he wears a mask whenever he wants to.

“And, in fact, not only does it not prohibit masks, but individuals are encouraged to wear masks,” Dower said. “What it does is give individuals the right to choose, make decisions about their own health and safety, and their own bodily comfort.”

Attorney Mike Siegel, who represented parents from Travis County, pushed back against that argument.

“Mr. Dower assured my clients that, well, if they send their kids to school with masks, they’ll be protected,” Siegel said. “And it reflects a fundamental misunderstanding of why we wear masks. When I wear a mask, I’m protecting other people, because I’m catching my spittle and preventing it from going into the air. And so, if other children are not wearing masks, our students, our children, are not protected.”

Soifer said her decision was influenced by the impending start of the school year and Texas being “at a really difficult time in the pandemic.”

The restraining orders will remain in effect for at least a week.