“This article appeared in the October 8 issue of the Progress Times.”

A former Sharyland ISD student created an Instagram account compiling stories of sexual assault incidents that allegedly occurred within the district. The account, with the user handle @rgvtestimonies, features video footage and photos of written statements by alleged victims.

While giving a public comment at the Sept. 27 school board meeting, the 2017 Sharyland High School graduate Dante Flores-Demarchi told the SISD board of trustees that he created the account.

“I recently started compiling and organizing a lot of public statements that have been made. And also private [direct messages] that people have asked me to make publicly, both anonymously and non anonymously,” Flores-Demarchi said at the meeting. “Look it up on Instagram. See for yourselves.”

Trustee Jose “Pepe” Garcia and former trustee Melissa Smith filed a lawsuit against the SHS alum earlier this year, accusing him of defamation. According to the case files, the plaintiffs claim Flores-Demarchi runs the political Facebook page Voters Against Sexual Assault. Posts on the page claim the two board members support sexual assault. Flores-Demarchi maintains he is not responsible for the Facebook account. 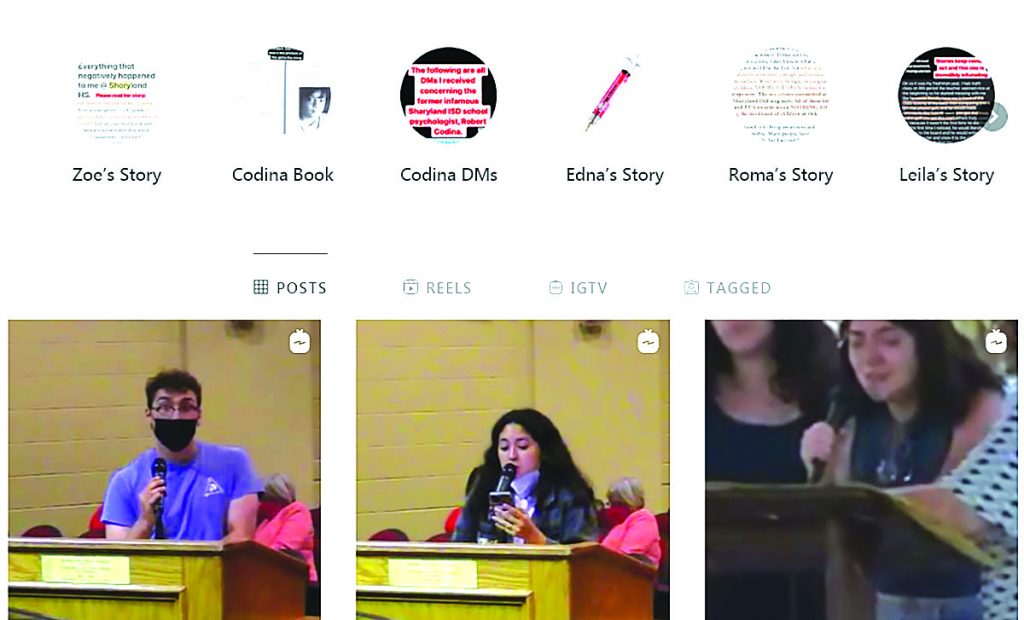 The former student declined to give a statement for this article and requested all communication go through his lawyer Lane Haygood. Haygood is a member of the First Amendment Lawyers Association and specializes in first amendment law.

The attorney — who is head of the Odessa-based law office Bailey & Gaylen — filed a motion to dismiss the case under the Texas Citizens Participation Act, following an Aug. 19 hearing. After 30 days, Judge Rose Guerra Reyna (206th District Court) denied the dismissal, resulting in Haygood filing for an appeal, which will go to the 13th Court of Appeals. Haygood and his client are waiting for the records to be sent to the court of appeals to begin the next step in the process.

“Then we will write briefs; I will write the one for Mr. Flores-Demarchi, and then the other side will have a chance to read my brief and respond,” Haygood said. “Then the 13th Court of Appeals will issue a written decision, at some point in the future, either agreeing with what the trial court did in denying the motion to dismiss or agreeing with me that the motion to dismiss should have been granted, and sending it back down to Judge Reyna with instructions for how to rule.”

But the timeframe for the entire process is undetermined.

Garcia, who did not attend the Sept. 27 meeting, said via text message he is not aware of the statements Flores-Demarchi made during his public comment. The trustee did not speak on the matter any further. Smith could not be reached for an interview before this article went to press.

Posts on the RGV Testimonies account feature videos of Sharyland ISD board meetings and footage from a protest dubbed the Voices for Survivors March in February 2020. The written testimonies on the page detail alleged incidents of mistreatment and sexual assault by SISD employees and students throughout the years.

Zitlalit Melgarejo, the sister of a Sharyland student that has spoken out about alleged assault from a now-retired SISD employee, also spoke at the Sept. 27 school board meeting and is featured on RGV Testimonies. Melgarejo, a 2018 SHS graduate, said it has been four years since the alleged assault occurred and was reported to the district.

“I stand before you as a reminder that the fight to get justice and to protect children from sexual assault is continuing,” Melgarejo said in her public comment.

She continued, “There has been no action, no statement, no justice. You could have put out a statement that said that sexual assault will not be tolerated in your schools and chose not to, but your silence speaks volumes.”

Melgarejo named Trustee Alejandro Rodriguez in her statement. She cited that he ran his election campaign on a platform of being on the side of children, but has not spoken on the alleged sexual assaults.

“The safety of our children at Sharyland ISD is paramount,” Rodriguez said in an interview with Progress Times. “The incident that the young lady addressed when she mentioned me by name happened way before I took office and my limited understanding of the situation is that it was investigated by law enforcement entities. However, if another similar incident may ever occur again, and God-willing I hope it does not, I will stand for the children’s safety and well-being.”

Reports of other alleged sexual assaults came to the fore in January 2020, after an underclassman accused former Pioneer High School student Trevor Heath of sexual abuse while in Corpus Christi for a swim meet during the fall of 2019. Heath, who was 18 at the time of the accusation, is also the son of former PHS principal James Heath. The former principal retired at the end of the 2019-2020 school year.

The Corpus Christi Police Department took on the case because the alleged incident transpired in Corpus. Progress Times submitted a police records request for an update on the investigation.

Flores-Demarchi and Melgarejo organized the Voices for Survivors protest in 2020 in response to the allegations against Trevor Heath.

Upon being asked to comment on the remarks made at the Sept. 27 school board meeting, Sharyland ISD released a statement.

“The safety of our students, staff and entire community will always be the highest priority for Sharyland ISD,” the statement released by Public Relations Director Nancy Barboza said. “All allegations and reports are taken seriously, due diligence is followed, as well as a thorough investigation. If required by law, Sharyland ISD has always reported allegations to appropriate authorities. Furthermore, authorities have always received full cooperation from Sharyland ISD when tasked with conducting an investigation.”