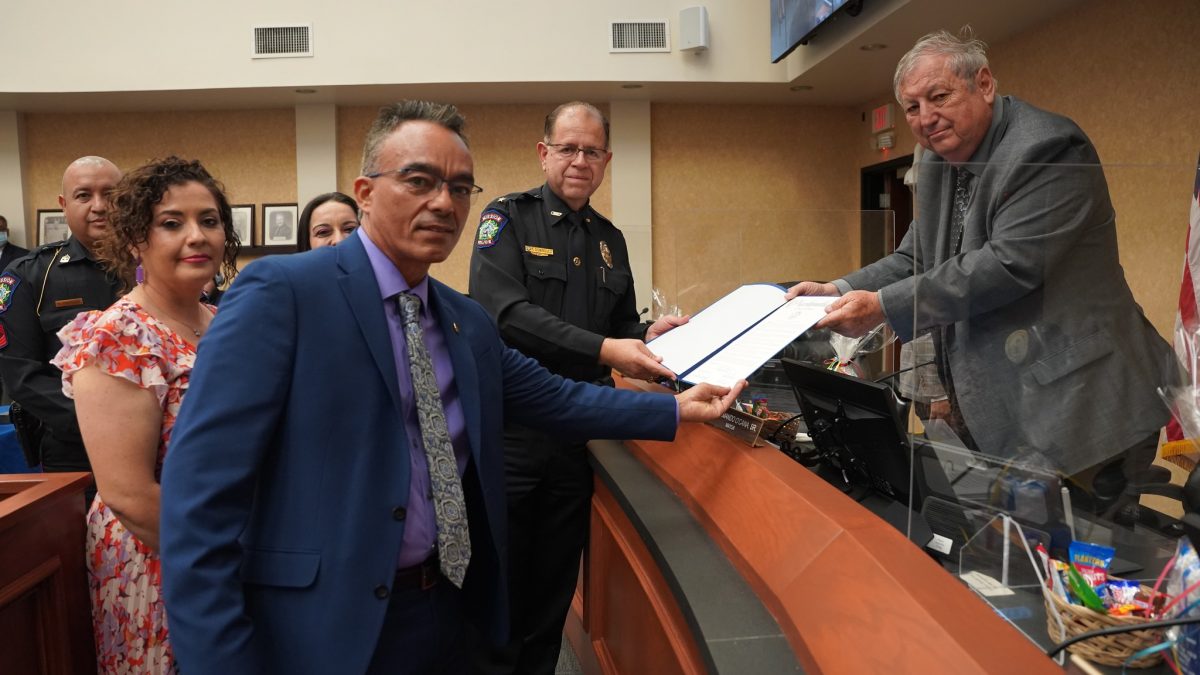 The Mission City Council confirmed the appointment of police Chief Cesar Torres on Monday, clearing the way for him to take over the Mission Police Department on May 1.

During a meeting on Monday afternoon, the city manager recommended Cesar E. Torres, 54, of McAllen for the job. The City Council voted 5-0 to confirm him.

“Mayor and City Council, thank you very much,” Torres said. “I’m excited. I can’t wait to get started. We’re going to lead this agency to an area that we’ve never seen before.”

Torres will replace police Chief Robert Dominguez, who retires on Saturday after 35 years with the Mission Police Department.

“It’s been a beautiful journey,” Dominguez said. “And I thank all of you for always supporting me.”

Torres graduated from Pharr-San Juan-Alamo High School in 1986 and started his law enforcement career in Mission.

“That was something that he highlighted,” Perez said. “That he started here and Mission gave him an opportunity.”

Torres resigned from the Mission Police Department in 1997 to join the Texas Department of Public Safety.

During his two-decade career, Torres worked for both the Texas Highway Patrol and the Driver License Division. Along with commendations for making significant drug busts, Torres received thank-you letters from the public for providing courteous service.

In May 2018, however, the Department of Public Safety demoted Torres from lieutenant to sergeant after the Office of the Inspector General concluded he “coerced a recruit applicant into signing a department recruiting bonus form,” according to documents released under the Texas Public Information Act. The Department of Public Safety also suspended Torres for 15 days without pay and transferred him from Weslaco to Austin.

“In life, sometimes we’re not all treated fairly,” Torres said. “So people don’t know the facts.”

Torres retired from the Department of Public Safety and became the Edinburg police chief in January 2019.

It was a turbulent time in Edinburg. Torres created additional controversy.

Torres clashed with the Edinburg United Police Officers Association, which accused him of making arbitrary personnel decisions and destroying morale. The association took Edinburg to arbitration — and won.

“The testimony by over a dozen officers was specific. It included officers at all levels, from Lieutenants, to Sergeants, to Police Officers,” Garza wrote to Torres in a termination memo. “The testimony was incredibly forthright at times, with officers testifying under oath about lacking respect for the decisions you have made, lacking trust in you, and the belief that the morale of the department is at its lowest point in some time.”

Torres responded with a lawsuit, which alleged that Edinburg fired him after he reported “criminal misconduct” to FBI agents. The case remains pending in federal court.

“My focus is to move forward with the city of Mission, and to work for the best city,” Torres said. “And push the city forward in areas that we’ve never seen before.”

“I looked at the advantages and disadvantages, his positives and his negatives, and balanced the need for the city,” O’caña said. “And he became a very viable candidate as a result of that.”