A businessman accused of tampering with a witness in the western Hidalgo County corruption case pleaded not guilty Wednesday.

“The weight of the evidence is very strong, from what I can see,” U.S. Magistrate Judge Nadia S. Medrano said after reviewing what she described as “lengthy excerpts” of conversations between Jorge O’Caña Jr. and other people.

The case against Jorge O’Caña Jr. is part of a federal investigation that uncovered widespread corruption in western Hidalgo County. 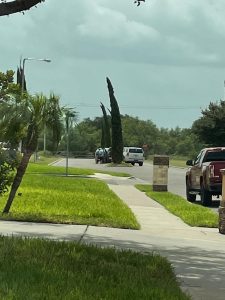 Documents filed in the cases against them detail a conspiracy to steer contracts to Performance Services Inc., an Indiana-based company that specializes in energy savings projects. Public officials who supported the contracts received bribes, kickbacks and government positions.

A grand jury indicted Jorge O’Caña Jr. and two other people, including the mayor of Peñitas, on June 1.

According to the indictment against him, Jorge O’Caña Jr. is accused of attempting to “influence, delay, and prevent” Weslaco businessman Antonio Gonzalez III from testifying.

Gonzalez pleaded guilty in April, when he confessed to participating in a conspiracy to bribe a member of the Mission school board.

“As part of the scheme, the defendant communicated with Person B, Person C and a Mission consolidated school board member, and reached an agreement to pay a bribe through Person B and Person C that would be utilized for the member’s political campaign,” Lopez said on April 18, when he read the factual basis for the plea in court. “In exchange for said board member’s official votes and support in the awarding of an energy savings contract to Performance Services Inc.”

Lopez didn’t identify Person B, Person C or the school board trustee by name. The government also removed other names and information from court documents to avoid identifying people involved.

The conspiracy took place in 2018, when the Mission Consolidated Independent School District considered a contract with Performance Services Inc.

An exhibit filed in the case included excerpts of WhatsApp messages between Gonzalez, Person B and Person C.

“Any intel from ur sis on how the lunch with [MCISD Board Member D] went?” Gonzalez messaged Person B on Feb. 13, 2018. Person B responded: “I’m waiting for her response.”

The messages also included conversations about paying for a political campaign.

“Hey, Tony! I wanted to talk to you about the amount that we were given for the deal we had originally made. It was my understanding that the amount was going to be $30, upon approval. $10 from each of you. That’s what [Person B] had told me when we started,” Person C messaged Gonzalez on March 2, 2018. “However, we were only given $25. ($6, then $19). As we get to the end of early voting and election day on Tuesday, obviously – we have to settle up all our workers and bills. Those $5 would come in handy.”

Gonzalez made the payments, but the school board rejected the Performance Services Inc. contract.

Jorge O’Caña Jr. attempted to “influence, delay, and prevent” Gonzalez from testifying, according to the indictment against him, which doesn’t provide any details. Whatever he did occurred between April 1 and April 5, 2022, about two weeks before Gonzalez pleaded guilty.

The indictment was unsealed Tuesday, when the FBI arrested him. Jorge O’Caña Jr. appeared in court Wednesday wearing blue shorts, a blue-and-white checkered shirt and a blue surgical mask.

Jorge O’Caña Jr. must either post a $5,000 cash deposit or find a co-surety willing to sign for him.

The judge also required Jorge O’Caña Jr. to surrender his passport, submit to GPS monitoring and remain on home detention.

If convicted on the witness tampering charge, Jorge O’Caña Jr. faces a maximum of 20 years in federal prison.