The Peñitas City Council appointed a new mayor on Monday. 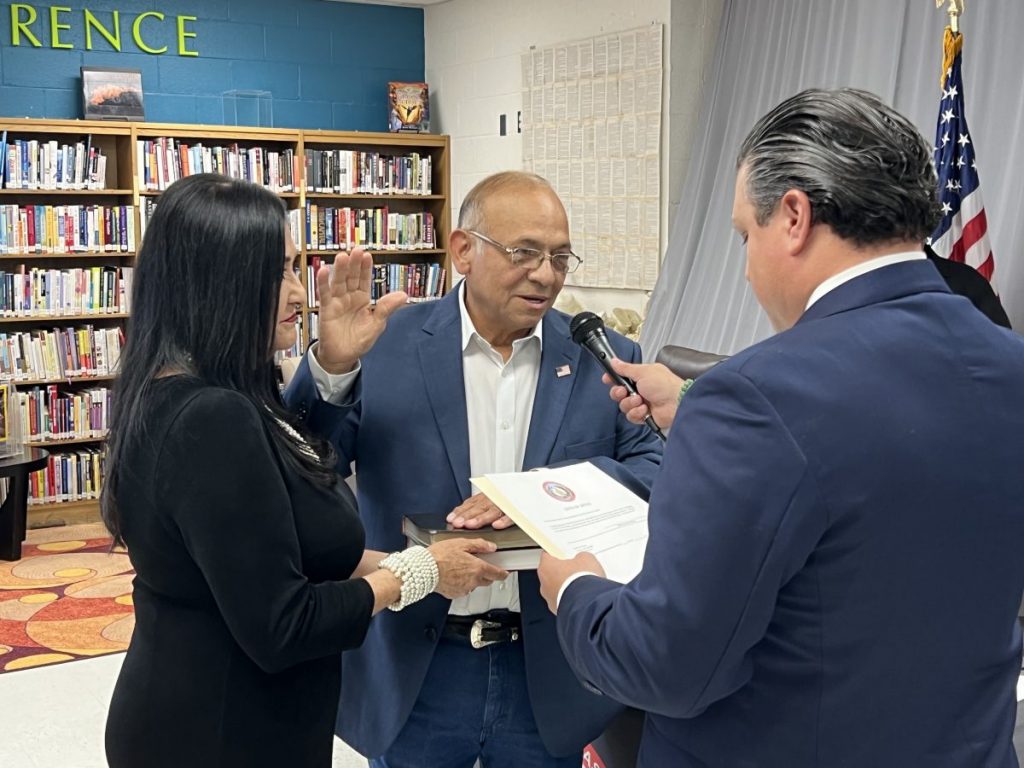 “It’s truly an honor to be the mayor of Peñitas, the city that I love so much,” said Loya, 72, a custodial services manager for the La Joya Independent School District.

Loya graduated from La Joya High School in 1968 and spent about 25 years with the Valley Coca-Cola Bottling Company, where he became a district sales manager.

In 2004, a few years after he left the bottling company, Loya accepted a job with La Joya ISD.

Loya and his wife, Mary, are part of a family with deep roots in Peñitas.

His son Ramiro Jr. works for La Joya ISD. His son Lloyd serves on the Agua Special Utility District board. And his son Lee served as chief of staff for state Rep. Ismael “Kino” Flores and state Rep. Oscar Longoria before leaving government and becoming a lobbyist.

“I want to say some words — repeat some words — from the late John F. Kennedy. And I quote: ‘Leadership is not a position. It is action and example,’” Loya said. “That is what’s going to happen here. We have a strong foundation of leaders. And we’re going to take Peñitas forward.”

Loya accepted the position at a pivotal time for Peñitas.

With the long-awaited La Joya bypass nearly completed, Peñitas is poised for explosive growth. The frontage road in Peñitas, where the highway meets U.S. 83, may become the hottest commercial property in western Hidalgo County.

To capitalize on that opportunity, though, Peñitas must partner with Hidalgo County on road projects, expand the city sewer plant and improve drainage infrastructure.

Peñitas is also contending with the fallout from a major public corruption case.

Four city administrators and two members of the City Council pleaded guilty to bribery, money laundering and extortion charges in the past nine months.

“My plan here in Peñitas, together with the City Council, is to take the city forward,” Loya said. “Keep our heads up high and always focus on the growth of the city.”

Lopez resigned on Aug. 11, when he pleaded guilty to theft. As part of his plea, Lopez confessed to defrauding La Joya ISD during a business deal in 2018.

“Knowing that the city will remain in good hands under your leadership, I hereby tender my resignation as Mayor,” Lopez wrote in a letter addressed to the City Council and community. “I thank the community and residents of Peñitas for their support over the years, and I thank each of you as well. It has been a sincere honor to serve this great community, and I wish you all the best.”

The City Council accepted Lopez’s resignation without any discussion. After consulting with attorneys, the City Council unanimously voted to make Loya the mayor.

Loya will serve the last eight months of Lopez’s term, which ends in May 2023.

Whether or not the City Council actually holds the power to appoint a mayor remains unclear.

That part of the Texas Constitution explains how cities, towns and villages where officials serve terms longer than two years must fill a vacancy.

“Any vacancy or vacancies occurring on such governing body shall not be filled by appointment but must be filled by majority vote of the qualified voters at a special election called for such purpose within one hundred and twenty (120) days after such vacancy or vacancies occur,” according to Article 11, Section 11, “except that the municipality may provide by charter or charter amendment the procedure for filling a vacancy occurring on its governing body for an unexpired term of 12 months or less.”

The city charter, however, doesn’t provide any procedure for filling a vacancy.

“I recommend that the City Council amend their charter to provide for procedures to remove” officials who plead guilty to felony charges, Hinojosa wrote to Loya on Aug. 12, and “fill vacancies for future situations like this one.”

Ric Gonzalez of Edinburg, who served as city attorney for nearly 20 years, said the charter allows the City Council to fill a vacancy when 12 months or less remained on an official’s term.

“In my opinion, it doesn’t violate the Texas Constitution,” Gonzalez said.

Gonzalez advised Peñitas in 2014, when Mayor Marcos Ochoa resigned to become a justice of the peace.

The City Council appointed Antonio “Tony” Flores Jr. to replace Ochoa in October 2014. Tony Flores served until May 2015, when the city held a mayoral election.

Attorney Frank Garza, who represents Peñitas, said the city had received a legal opinion from Gonzalez in 2014.

“And that opinion still holds today,” Garza said, adding that Peñitas had cleared the opinion with the Texas Attorney General’s Office and the Texas Municipal League.

As mayor, Loya will preside over meetings, nominate people for city positions and handle a wide range of ceremonial responsibilities.

“I’ve seen him work, so I know his heart is into it,” J.R. Flores said. “And he will do the best that he can, given the circumstances that we’re facing.”