Mission City Attorney Gus Martinez resigned in mid-September after the City Council agreed to pay him more than $74,000.

Martinez resigned on Sept. 16 after the City Council met privately — in what is called “executive session” — to discuss his evaluation.

“We wish Gus the best,” said City Councilman Ruben Plata. “It was time for us to move in a different direction.”

In exchange for his resignation, the City Council agreed to provide Martinez with a severance package equivalent to six months salary and insurance benefits. He summarized the agreement in a brief resignation letter.

“Inn (sic) acceptance of the six (6) months wage and insurance severance package, I hereby tender my Letter of Resignation as City Attorney for the City of Mission effective immediately,” Martinez wrote.

Martinez earned $148,526.04 annually, according to salary data Mission released in January, which means a six-month severance package would be worth more than $74,000. 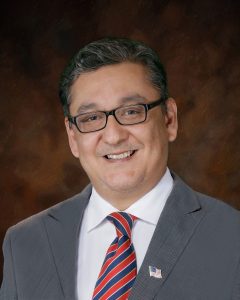 The City Council voted 4-1 to accept Martinez’s resignation and authorize the severance package.

“I know it was the best thing for the city. We wish Gus well,” Plata said. “The city’s growing and we need someone with more experience in municipal law.”

City Councilman Abiel Flores, who served as city attorney from 2015 to 2018, cast the only dissenting vote.

“It’s my opinion that any government employee that does not have a contract should not be given a severance at the time of their departure from the city,” Flores said.

Martinez had no employment contract, Flores said, and taxpayers had no obligation to provide him with a severance package.

Plata and Flores said they couldn’t explain why the City Council decided to approve the severance package because the discussion happened during executive session.

“At the end of the day, he resigned and there was a vote to pay him a severance for his departure,” Flores said. “I really can’t get into details about how that transpired. But that’s ultimately what the council decided.”

Martinez won a seat on the City Council in June 2018. Less than a year later, when Mission needed a city attorney, Martinez applied for the job.

The City Council, apparently unimpressed with the other applicants, hired Martinez. In an instant, his colleagues became his bosses.

“Under the charter, I work for the council,” Martinez said. “The council has the absolute right to choose their own counsel. And I accept that.”