This article originally ran in the March 18 issue of the Progress Times.

A project that has been 12 years in the making is “finally coming to fruition,” Engineer Ramon Navarro said at the March 14 Mission City Council meeting. The Hidalgo County Regional Mobility Authority began turning dirt on the 365 Tollway project this week.

The 12.2-mile stretch of highway will run east to west, about three miles away from the Texas-Mexico border, and it will go from the Anzalduas Port of Entry to the Pharr/Reynosa International Bridge.

“This is a large project. A project of this magnitude hasn’t been seen in this area since they built [Expressway 83],” Navarro, the chief construction engineer, said. “It’ll be a major thoroughfare, and it is an overweight corridor. And it will be tolled.” 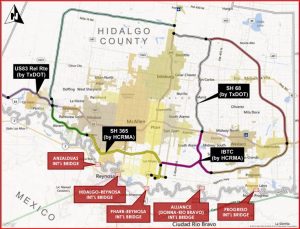 Since 2010, the local transportation authority has been working toward building a new state highway in Hidalgo County specifically for heavy commercial vehicles — the 365 Tollway. When they began planning, they were looking to the future of mobility in Hidalgo County. Last year the Texas Department of Transportation released a report stating the number of northbound commercial vehicles on the Texas-Mexico border is forecasted to grow from about 5.6 million trucks in 2019 to about 14.9 million trucks in 2050. Building the 365 Toll road gets ahead of the problems that additional traffic would cause.

Although the HCRMA designed the tollway to keep commercial traffic separate from regular traffic, locals do have the option to use the new state highway too. Navarro said using the 365 would save 12.2 to 15 minutes of travel time.

“With the commercial businesses, time is money, and it’s imperative that they save as much as they can,” he said. “And getting them through the county is essential because of the fact of all the havoc they’re causing on the local roadways with the overweight etc., and we’re trying to avoid any of that mitigation.”

The HC Regional Mobile Authority financed the project through a combination of local monies, bonds and grants. Representatives from the transportation authority have said the $100 million in bonds will be paid over 30 years in toll fee collections. And last summer, the HCRMA secured $27 million in federal grants to cover the final costs needed for construction to begin.

Pulice Construction is the contractor working on the project, Navarro said. HCRMA awarded the bid for about $295.9 million, which was 14 percent over the engineer’s estimate. Through value engineering — a cost-saving method that examines functions of products and services — they were able to bring the price down to about $281.7 million, making the project financeable.

The contractor has 1264 days to finish the project, making the substantial completion date Sept. 25, 2025.

“That sounds like a long time, but it’ll be here before you know it,” the project engineer said. “And we are confident the contractor can accomplish this task. This is a calendar day project which means snow, rain, sleet, hail — we work on this 12.2-mile section. And if they can’t complete it, liquidated damages will be charged $16,500 a day. So that’s a substantial amount for a contractor to pay, and of course, nobody wants to lose their pocket change.” 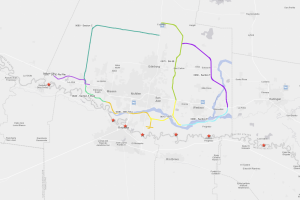 The tollway will be structured similarly to Expressway 83 — there will be two lanes in each direction, complete with frontage roads. There will be a combination of 24 overpasses and underpasses, which equals 12 intersections — two bridge structures at each one.

Navarro said there will be minimal impact on existing traffic because the 365 Tollway is a greenfield project, meaning there is no construction on existing infrastructure. But locals will be most affected by the project at the 12 proposed intersections, including an underpass at Glasscock Road and an overpass at Shary Road.

Before construction began, the HCRMA and Pulice held meetings with law enforcement and first responders in each of the cities they will traverse, as well as the transportation facilities of each school district. But during his presentation to Mission City Council, Navarro assured them they will have proper signage on-site and barricade accordingly.

“We’ve been crying wolf for some time, and of course, all the sheep and the lamb never believed us,” he said. “We’ve been doing this for the last three and a half years, and we finally came about and got a contractor on board, got the bonds secured; we are for real this time.”