The Mission Police Department arrested a former IDEA Public Schools teacher Thursday after she was accused of having sex with a student.

Officers arrested Karen Bereniz Sosa, 27, of Mission on Thursday, according to Det. Art Flores, a spokesman for the police department. Sosa worked at IDEA Mission, which is located on Schuerbach Road. 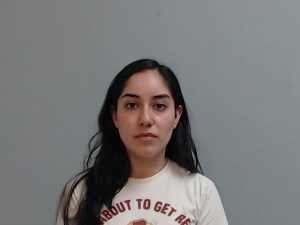 The investigation started on Jan. 11, Flores said, when officers interviewed a male student about his relationship with Sosa.

“He admitted to having sexual contact, sexual intercourse, with the teacher,” Flores said.

Officers determined the sexual activity between Sosa and the student happened at a park during winter break, Flores said, not on campus.

Sosa also used Instagram to send the student nude photos, Flores said, and communicated with him by text message.

IDEA released a statement about the allegations on Thursday.

“At IDEA Public Schools, the safety of our students and staff is our top priority. IDEA Mission is aware of allegations of an inappropriate relationship involving a staff member. IDEA officials have launched a thorough investigation and are fully cooperating with local law enforcement,” according to the statement. “The staff member is no longer employed at IDEA Public Schools. As this is an ongoing investigation, all further questions should be directed to the appropriate law enforcement agency.”

The statement didn’t specify when Sosa stopped working for IDEA.

Officers charged Sosa with improper relationship between educator and student, a second-degree felony. If convicted, she faces 2 to 20 years in state prison.

Sosa remained at the Hidalgo County jail on Thursday night and couldn’t be reached for comment.