When they filed the lawsuit, however, attorneys for the city inadvertently made the sexual harassment complaint public.

The complaint revealed that Wylie was accused of sexual harassment in September 2021, when he served as interim city manager. A widely respected female employee with nearly two decades of experience in her field said Wylie had sexually harassed her for years.

“He has asked me to hug and kiss him (because I have greeted a commissioner that I have known for many years in that manner), he has asked me to send him bikini photos. He has asked me if my legs are ‘soft or hard’. He has also made comments about the way my clothing fits, such as ‘who painted those pants on you?’ He has also sent messages telling me I have a nice body. He has admitted he is attracted to me, but claimed he would not act on it,” according to the complaint, which is dated Sept. 28, 2021. “Other times, he has found opportunities to place his hand on my shoulder and squeeze-particularly when I’m sitting at my desk, he has also placed his hands on my back as I’m walking out of a room. Other times, he has reached to squeeze my elbow.”

Wylie created a hostile work environment at City Hall, according to the complaint, and managed the city through a system of “fear and intimidation.”

“I also learned that during interviews for his own Executive Administrative Assistant, one of the applicants indicated she was leaving her employment due to sexual harassment,” according to the complaint, which continued: “he made the comment ‘I guess we can’t hire her.’ I know I am not the only one who has been sexually harassed by Edward Wylie.” 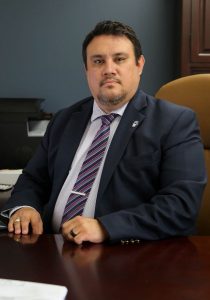 Edward M. Wylie (Photo courtesy of the city of Pharr.)

The Progress Times decided not to identify the employee by name because people who report sexual harassment frequently experience retaliation.

The employee, who still works for the city, said that she believes there should be more training and education about sexual harassment in the workplace.

“I think people need to be trained,” the employee said Tuesday in an interview with the Progress Times. “And need to understand it’s not OK.”

On Sept. 2, 2021, about four weeks before she filed the complaint, the employee sat down with Wylie to share her concerns. They were joined by an assistant city manager and the director of human resources.

“I get it,” Wylie said, according to a memo prepared by the city Human Resources department, which summarized the meeting.

Wylie said he jokingly made comments because “we all get along that way,” according to the memo, but acknowledged “they should have kept it professional.”

The employee sent a formal complaint to Mayor Ambrosio “Amos” Hernandez on Sept. 29, 2021.

“Most recently, after my fourth attempt to address his inappropriate and unprofessional behavior with him, he has completely left me out of important meetings and conversations with staff and administration,” according to the complaint. “He will not respond to my emails-to at a minimum confirm he received them. I have gone from daily communication and in person meetings with staff and administration to being completely left in the dark and being excluded from meetings and having no communication with Edward Wylie.”

The employee also provided the city with screenshots of text messages, which showed Wylie had sent her inappropriate memes.

One image, described as a “bowling alley ad,” included the caption: “It’s amazing what you can do with two fingers and a thumb.” Another showed a woman lifting her skirt so a fan could blow air between her legs.

The employee asked the City Commission to conduct an investigation.

“His actions towards me are clearly retaliation. Other employees have been either suspended or terminated for less than what Edward Wylie has done,” according to the complaint. “It is time to address this elephant in the room.”

Whether or not Pharr actually conducted an investigation remains unclear.

Documents released by the city don’t show any disciplinary action against Wylie, who remained the interim city manager until April 2022.

According to the city, Wylie returned to his old job, deputy city manager, because he didn’t want to move to Pharr.

“The City of Pharr’s City Charter requires that the city manager live within city limits — Mr. Wylie does not reside within the city,” according to a statement Pharr released when Wylie stepped down.

Pharr kept the complaint, text messages and other documents confidential for more than a year.

The Progress Times became aware of the sexual harassment complaint in September 2022 and filed a public information request for the documents.

Pharr hired a Harlingen-based law firm, which asked the Attorney General’s Office to review the request.

The law firm, Denton Navarro Rocha Bernal & Zech, argued that disclosure of the documents “would not serve any public interest.” The Attorney General’s Office disagreed and directed the city to release the documents with redactions designed to keep the employee anonymous.

Pharr responded by filing a lawsuit against the Attorney General’s Office on Jan. 18, attempting to prevent the documents from being released.

The law firm attached the sexual harassment complaint, text messages and other documents to the lawsuit. The Travis County District Clerk released the lawsuit and attachments, which were not filed under seal, in response to a request for court records.