With members all over the state, a local chapter of a motorcycle club recognized by the Texas House of Representatives is gearing up for a new year.

The Calaveras Motorcycle Club has a diverse membership that includes doctors, lawyers, firefighters, teachers, mechanics and retired military personnel. The club regularly sponsors barbecues and raffles for charitable causes, including initiatives that support children and adults suffering from life-threatening diseases. During the holidays, the club sponsors toy drives at Wal-Mart locations and hand-delivers presents to boys and girls who are economically disadvantaged or residing in foster homes or hospitals. 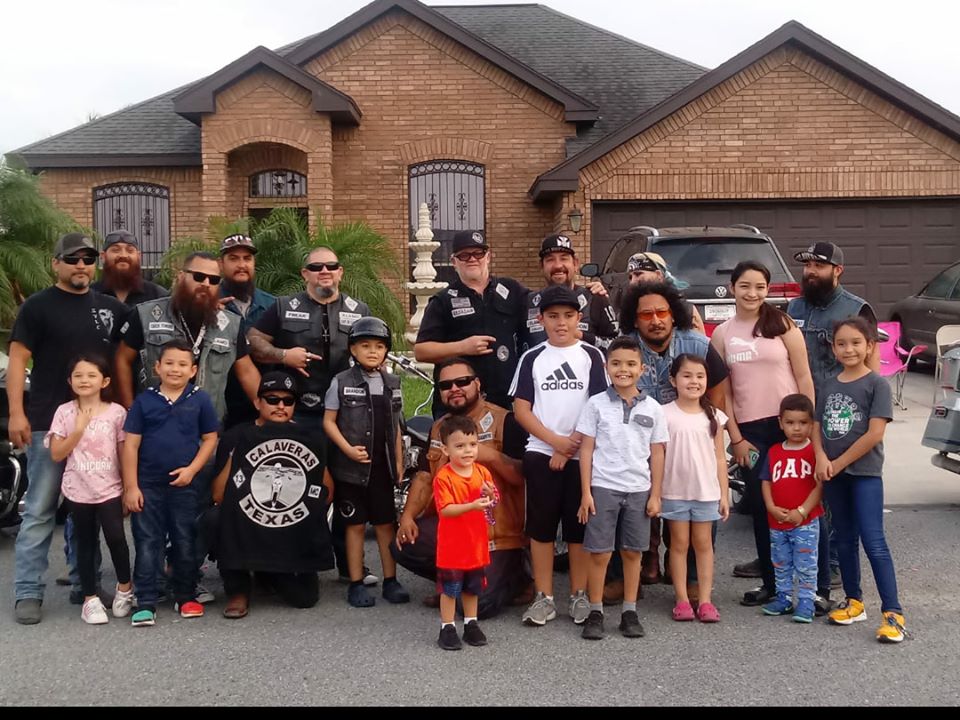 Members of the Calaveras Motorcycle Club with Brandon Tadeo Alvarez (center)
at an April 2019 benefit supporting him. Courtesy photo

“We’re a family club, we try to do everything we can to help our community and people in need,” David “Deadbeat” Carrera, an officer with the Las Milpas chapter of Calaveras MC explained. “Our thing is family comes first and family is part of the community, they go hand in hand. It’s why we do everything we can to help as many as we can. If you’re a family member, we try what we can do to help you, we jump in, no questions asked.”

Carrera, who joined the chapter last year, said there are 150 members across the Valley after it was originally established in 1968.

Last December, local members participated in multiple toy drives all over the Valley and across the border to distribute more than 2,000 toys that were donated to them. Toys were donated to the Edinburg children’s hospital, the Mission Housing Authority, colonias in Donna and San Juan and at San Benito’s Live Now Ministries.

That month, Carrera said, Calaveras MC also donated toys to children in Nuevo Progreso, a town in the Mexican state of Tamaulipas. The toy drive was made in conjunction with Taquilero MC, a club out in Progresso, Carrera said.

“We gave out 600 toys in Nuevo Progreso, it was the first time we rode our bikes across the border for a benefit like this and it was an eye-opening experience,” Carrera said. “You see so many kids out whose faces just light up over something as small as a teddy bear and everyone is so thankful because for many of them, this is the only gift they’ll be able to afford.”

With this emphasis on being involved with the community, Carrera says that it helps clear up a misconception about bikers.

“The misconception of bikers is that we’re out causing trouble-that’s never the case; we’re out wanting to help.” Carrera said. “It’s something very nice, good for the soul. We know it’s not something that gets done very often and we’re trying to break barriers.  We want to help those on either side of the border and give back. It’s one of the most beautiful things I’ve done in my entire existence. I’m very happy I’ve made this decision. I’m glad I’m part of Calaveras because of everything we’re able to do and the influence we try to lay on this community.”

Last April, the Calaveras MC gained a bigger following on social media after participating in a benefit in honor of Alton resident Brandon Tadeo Alvarez, a 9-year-old boy diagnosed with liver cancer. Calaveras MC held a fundraiser for Alvarez and even made him a member of the club and gifted him his own riding vest before passing away the following month.

“He was very sick that day, but was extremely excited about it,” Carrera recalled. “We wanted to do something for him that showed that he and his family could count on us to be there for him so we made him a brother because that’s how we thought of him.”

The actions of Calaveras MC led the organization to be recognized by the state in a resolution signed last May by the Texas House of Representatives after it was sponsored by State Rep. Sergio Munoz Jr.

“Staying true to their motto, ‘I’m My Brother’s Keeper,’ the members of the Calaveras Motorcycle Club have demonstrated a strong commitment to helping others, and their willingness to give of their time and energy sets an outstanding example of civic engagement,” the resolution states. “Now, therefore, be it resolved that the House of Representatives of the 86th Texas Legislature hereby commend the Calaveras Motorcycle Club for its exceptional record of community service and extend to its members sincere best wishes for success with their philanthropic endeavors”

Though Calaveras MC isn’t currently working on any benefits, Carrera said the organization is keeping an eye out on social media for any people in need that they will reach out to offer support.

“It’s a brotherhood, when we’re not helping, we’re riding and going out and supporting each other,” Carrera said. “It’s extremely good to help, it shows there are people every day who will support them. The helping never stops.”

This article originally appeared in the Friday Jan. 10, 2020 issue of the Progress Times