Moriah Dixon and Rachel Davis were both shocked and in awe of the pink flamingos at Gladys Porter Zoo.

Last Friday Faith Christian Academy, located at 4301 N. Shary Road in Palmhurst, took the entire student body – from kindergarten to high school – to Gladys Porter Zoo in Brownsville. The weather didn’t stop the kids from experiencing everything the zoo had to offer. 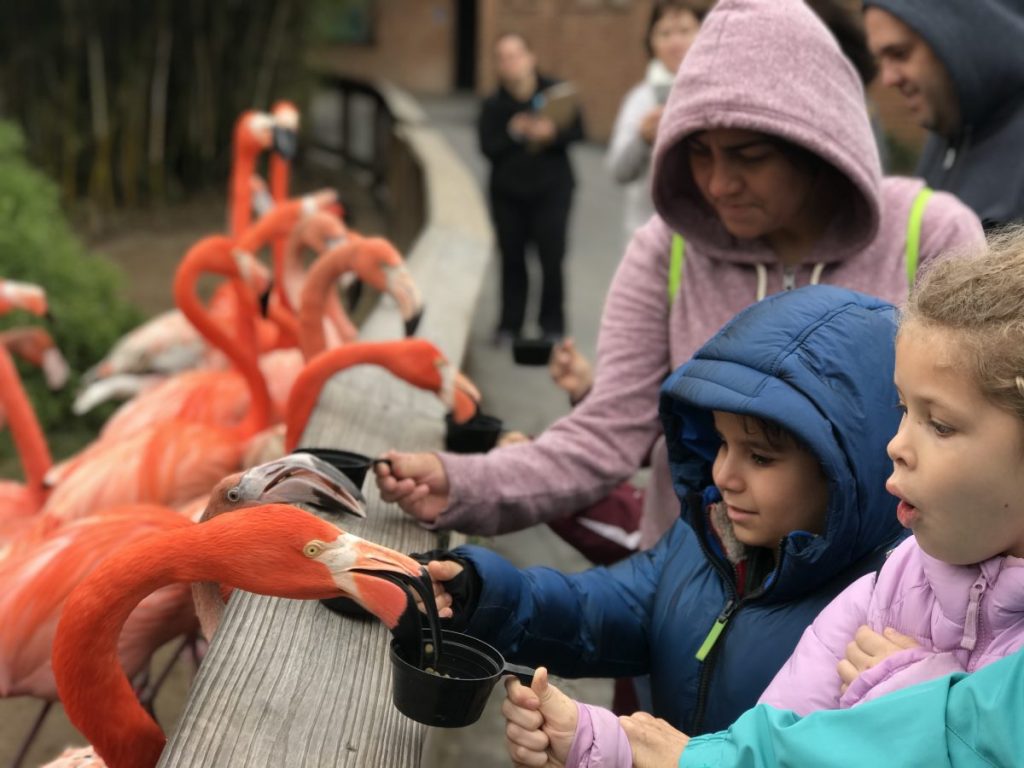 Thanks to an anonymous donor, Faith Christian Academy was able to experience some behind-the-scenes features at the Gladys Porter Zoo – giving the students an opportunity to get up close to exotic animals, feed them and in some cases even touch them.

In the morning, students were split into groups based on their ages – elementary, middle school and high schoolers all got personalized educational lessons on animals and how they are categorized. From there, they had a schedule to follow.

The elementary students started with a lesson on animal groups by Kathryn Cardenas. Cardenas led the little ones through the exhibits, allowing the students to stop and peer at some of the featured creatures.

The schedule varied from group to group, with the older students taking on different creatures they would be able to handle. For the kindergarten through second grade kids, their first stop was at the kangaroo exhibit. David Aguirre, a zookeeper at Gladys Porter Zoo, led the way and showed them how to feed the curious marsupials.

From there, Cardenas led them to the flamingos, whose bright pink plumage stood out amidst the gray morning. There the students were allowed to feed the birds, which squawked and cawed in anticipation of a meal.

Hesitant at first, then blown away at how close they got to the flock, the children clenched black cups with feed in their fists and watched the flamingos shaking heads peck at their offering. Moriah Dixon, whose father works at Faith Christian Academy, found the flamingos to be her favorite part of the morning.

“I liked when they were like [pecking],” Dixon said, moving her face back and forth like the flamingos behind her. “I don’t like the tall, grown ones, because they got so close to my hands. The little ones are so gentle.”

Rachel Davis, a first grader who carried her own teal camera around like a badge of honor, documented her field trip every chance she got. Davis wasn’t as excited about the flamingos, but she fed them just the same.

“I just don’t like when they walk so close,” Davis said. “It felt like the big ones were coming after me – the feathers were nice.”

After feeding the flamingos, the kids were taken by the racoons, lions, giraffes, tigers, birds of various species, bats and porcupines, amongst other residents at the zoo.

Cindy Saenz, a K-4 and K-5 teacher at Faith Christian Academy, was excited to see all the students participating in the trip.

“They’re still learning,” Saenz said, noting the benefits of taking education outside the regular classroom setting. “They thought this was going to just be a fun trip, but they don’t realize that they’re learning.”

The teachers at Faith Christian Academy will be reinforcing some of the lessons when they get back to the school.

“They still remember a lot,” Saenz said. “There’s so much information, and the exposure is crucial.”

Saenz noted that the school incorporates God and the study of the bible in every subject, and the field trip would be no exception. Students filled out learning packets as they made their way through, which also contained a list of animals they could find that were also featured in the holy book.

“Next time we come across an animal in the bible, they will be able to relate to it – ‘Oh, that’s the animal we saw at the zoo,’” Saenz said. “And that’s what our goal is: for them to see God’s creations.”

After lunch, students were split into new groups, consisting of high school, middle school and elementary students mixed together. Some groups took a tram tour around the zoo grounds, led by Jaime Zepeda.

Others were taken to feed the massive giraffes living in the zoo. The giraffes, with long blue tongues and an interesting gait, leaned over fencing to accept leafy snacks from the hands of nearly every student.

As Perez taught the Faith Christian Academy students, he allowed them to see the animals for what they are when handled correctly: docile and relatively harmless. As he spoke, he took this multi-legged, or in some cases, slithering, friends around the room, allowing the creatures to be gently touched and seen before the kids’ very eyes.

The field trip also included a devotion, which encouraged students to reflect on their day and the gifts they were blessed with. Filing out of Gladys Porter, the kids from Faith Christian Academy were abuzz with chatter, ready for the journey home so they could recount their trip to their parents.

The students documented all the people who served them during the visit, and their post-trip assignment was to write thank-you letters to everyone who helped educate them at Gladys Porter Zoo and make the excursion possible in the first place.