Ashley Rodriguez has been working hard academically and athletically to continue her journey at the collegiate level.

Last Fri. March 6, Rodriguez, a senior at Juarez-Lincoln High School, signed a letter of intent to play soccer for Western Texas College. Her mother and aunt, along with her coaches, administration and peers, were there to cheer her on as she made her next step forward. 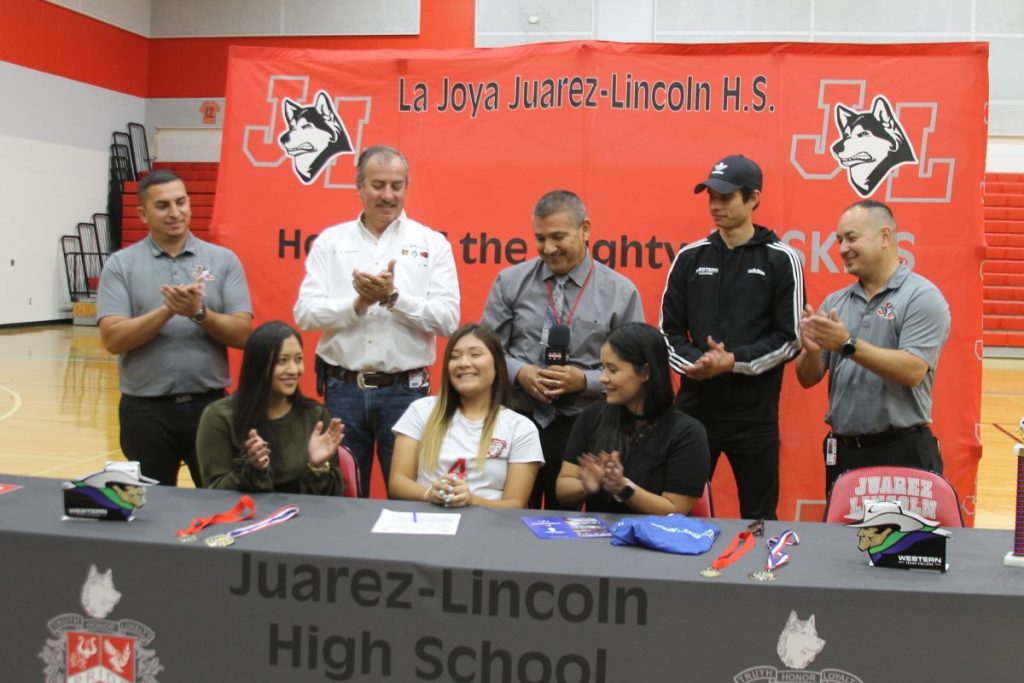 Ashley Rodriguez will be competing as a Westerner next fall once she graduates. Progress Times photo by Jamie Treviño.

Juarez-Lincoln Principal Ricardo Estrada congratulated Rodriguez for all her accomplishments.

“We’re so proud,” Estrada said, noting she would always be a Husky. “Make sure you find your path and pursue it.”

Rodriguez’s mother was moved by the event, calling her daughter the best. Ashley also spoke, and thanked her mother above everyone else for working daily and supporting her.

“Always being a single mother, she’s worked so many hours – I am the player I am because of her right now,” Rodriguez said through tears. “I deserve everything, she deserves everything.”

Rodriguez thanked several other key players in her life for being there for her. Garza noted to everyone that they were tears of joy, of a job well done, and marked her excitement for the future.

“It’s overcoming those hard times, you don’t understand how difficult it is,” Garza said. “To have a disciplined, straightforward daughter exemplifies that it can be done if you set your mind to it, show self-discipline and self-respect.”

Rodriguez accomplished several goals during her time competing for Juarez-Lincoln, and was the 2nd Team All-District Defender in her freshman and sophomore years. She earned an honorable mention her junior year due to a season injury, and returned as Team Captain her senior year.

Rodriguez will be trading in her Husky uniform for a Westerner, and intends to study nursing.