Residents driving down Conway Avenue and Mile 6 Road in Alton were treated to a familiar sight Thursday: traffic leading to the Pulga Los Portales Flea Market.

The flea market, which has been open for more than two decades, reopened to the public Thursday, April 30 after closing last March due to the COVID-19 pandemic. 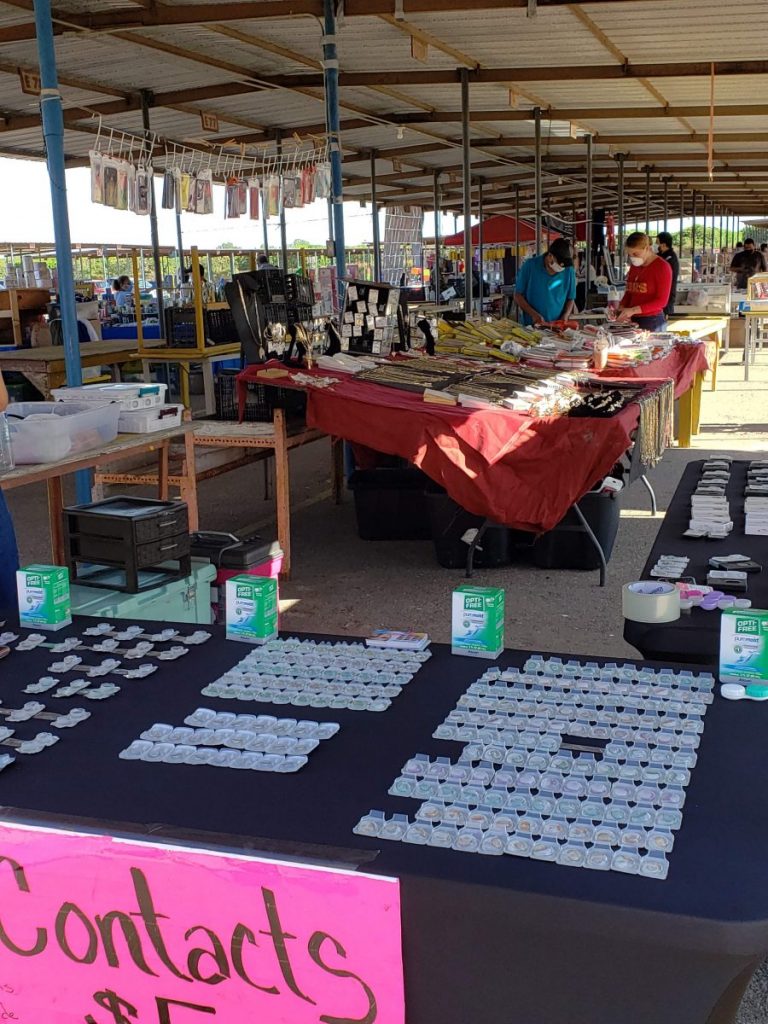 It hasn’t been business as usual for Los Portales, however, as it has been open in a drive-thru capacity for the last two weeks.

“We closed March 13 following guidelines from the city and after that the county issued an order that prohibited mass gatherings, effectively stopping us from operating in a safe way,” Michelle Vallejo, co-owner of Pulga Los Portales said. “When it came down between staying open to put money into the pockets of our vendors, or closing for the sake of public health, it was easy to make that choice.”

Pulga Los Portales is unique in that it is only open on Thursdays from 5 a.m. to 2 p.m. According to Vallejo, 500 vendors fill up the 25-acre property to sell a myriad of items to shoppers from produce, snacks, clothes and jewelry. Many of the vendors have been operating at Pulga Los Portales since it opened 22 years ago, Vallejos said.

“We’re an industry that supports each other because a lot of our vendors do not have other job opportunities,” Vallejos said. “They depend on what they make here every week. We’ve been calling the vendors to check in on them since we’ve stopped seeing them week after week and were worried for them.”

Following Gov. Greg Abbott’s orders that allowed the reopening of the Texas economy, many retail stores and shopping malls began opening at a limited capacity, causing Vallejo to reach out to the city of Alton to see if Pulga Los Portales falls under those guidelines.

“One of the line items in Abbott’s order was that malls could reopen at 25 percent capacity and we looked at the flea market and asked ‘how is it different from a mall?’” Alton City Manager Jeff Underwood said. “That’s how we viewed it. We were clear with the flea markets they could reopen at a limited capacity and present to us a work safe plan and Vallejo told us she had plans to re-open as a drive-thru operation that was much more restrictive than just re-opening it like normal. We were fine with that.”

50 vendors participated in the reopening as 400 shoppers appeared, Vallejo said. The flea market, which has a capacity of holding 10,000, will only allow 1,750 shoppers, Vallejo said.

“We felt comfortable with the way we’ve organized this concept,” Vallejo said. “We are stressing that if you feel sick, stay home until you get tested or feel better to not risk anyone’s health here.”

When Vallejo announced the reopening to vendors, many of them expressed relief, she said.

“They came to us saying ‘we need to eat, we need money to put food on the table,’” Vallejo said. “Vendors were enthusiastic and happy and they are taking every precaution we’ve communicated with them. They understand that we are at risk of closing if we don’t take the right steps or more coronavirus cases happen, these are all risks we have communicated with and are taking together with our vendors. If Los Portales closes, they close too.”

Vallejo also expressed concern on the flea market’s finances. Since its closure, Pulga Los Portales lost out on possibly thousands of dollars vendors usually make during the spring season, it’s the busiest time of the year, Vallejo said.

The city of Alton is also seeing less revenues as it also collects license fees from vendors at the flea markets, Underwood said.

Due to the pandemic, Vallejo said many businesses are being forced to adapt to the changing times. She said she is looking into a website for the flea market to allow for online shopping.

“We’re only going to move forward and can’t move back to how businesses operated before this,” Vallejo said. “I truly believe the impact of the coronavirus is defining the decade and its effects will be felt for a generation. We’re organizing this and our community in a new way.”